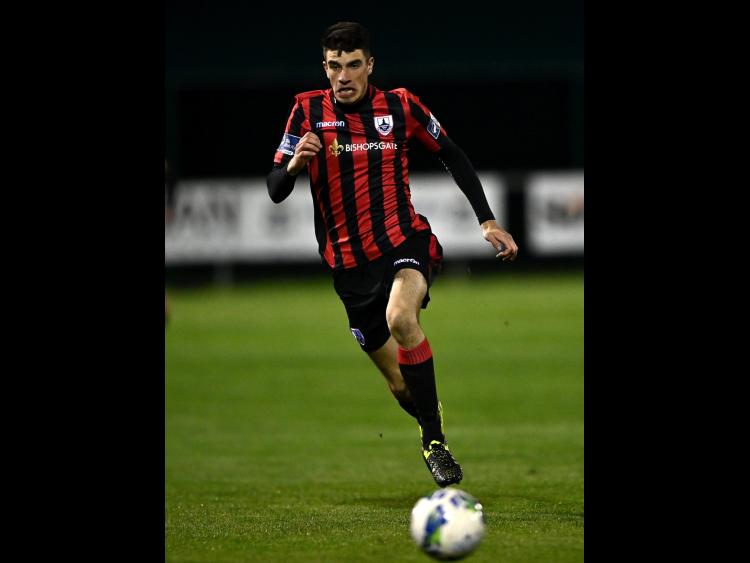 Rob Manley was on target for Longford Town during a friendly against UCD at the Belfield Bowl but he was forced to retire injured iin the friendly assignment against Cobh Picture: Sportsfile

Longford Town are preparing for their return to the Airtricity League Premier Division with friendly fixtures against First Division clubs and the squad, strengthened by a number of new signings, are looking forward to the kick-off to the 2021 season against Derry City at Bishopsgate on Saturday March 20.

When Longford were in the First Division, there were frequent friendly games against clubs in the top flight and some positive results materialised in a confidence boost for the start to the season.

The Town are now back in the big time on merit but with the lengthy lockdown and very strict regulations over social distancing and the 5K travel restrictions still in place, the forthcoming league campaign will begin behind closed doors.

That is particularly tough on the loyal Longford supporters amid the big buzz of getting back into the Premier Division and there is no doubt that the Bishopsgate Stadium could accommodate four or five hundred spectators and still keep within the Covid rules.

Getting back to the action on the pitch, Longford Town manager Daire Doyle seemed to be happy with the two friendly games played last week at Dublin venues.

The first match was against UCD at the Belfield Bowl with boss Doyle fielding two teams as he wanted to utilise his entire squad. The first half was a tight affair with both sides playing some very attractive attacking football.

The new signings impressed in this game and the Longford manager will have a selection headache when it comes to naming the starting team to take on Derry City in the opening league fixture on March 20.

Rob Manley, who started in the second half against UCD, showed a quick return to his scoring ability when he put the Town ahead on the hour mark but the students equalised in the 77th minute when Paul Doyle, who was clearly offside, shot past the opposing keeper Luke Dennison.

Former Sligo Rovers midfielder Liam Kerrigan scored the winning goal for UCD but it was a very useful workout for Longford in the build up to the new season.

The second friendly fixture, against Cobh Ramblers played behind closed doors in Dublin on Thursday night last, proved to be another tough test for the Town who lost 3-2.

Like the game against UCD a few days earlier, Daire Doyle used all his squad with Luke Dennison starting in goal for the first half.

Cobh broke the deadlock when Ian Turner scored in the 9th minute and the same player got a second goal for the Cork club who led 2-1 at the break.

Rob Manley started in attack for the Town but he was forced to retire injured with the replacement Aaron Dobbs on target for the midlanders in the 16th minute.

Early in the second half Dobbs was taken down in the box for what looked like a stonewall penalty but there was no whistle from the referee.

Sam Verdon sent a curling shot towards goal while Karl Chambers went close with a header that was saved by the Cobh Keeper.

Against the run of play, the Town fell further behind when Cobh capitalised on a mix up in the Longford defence to score a third goal in the 64th minute.

Aaron McCabe, who replaced Callum Thompson at half-time, was denied by the Cobh netminder Chambers in the 82nd minute before Aaron Dobbs found the back of the net with a rocket of a shot in the 88th minute and that was the way it finished.

The Town were back in action against Cabinteely in another friendly on Sunday last which resulted in a 2-1 defeat.

Aaron Dobbs fired Longford in front when he converted a penalty in the 78th minute but Cabinteely hit back with goals in the 84th minute (penalty) and the 87th minute to snatch a win.

The preparations for the exciting new season will continue with games against Galway United this Saturday and then against midland rivals Athlone Town a week later.

Kelly left Longford to go to England but returned home to link up again with Cabinteely. He has also played with Bohemians and Shamrock Rovers during his League of Ireland career and he gives the Town management team another solid option.

Daire Doyle also made a last minute signing when he secured the services of Aaron O’Driscoll on loan from Mansfield Town.

The big central defender was previously on the books at Manchester City before joining Southampton in 2016 and he was with them until August 2020.

The Town manager Doyle has assembled a strong squad in the quest to retain Premier Division status and the players will be very determined to achieve that target in the top flight.

At the time of writing the situation regarding attendances at matches has not been clarified for the new season but we are all hoping to see a bit of relaxation on the lockdown so that some supporters will be allowed into the grounds in the foreseeable future.

Season tickets are still available and can be purchased at Bell’s Shop in Newtownforbes.