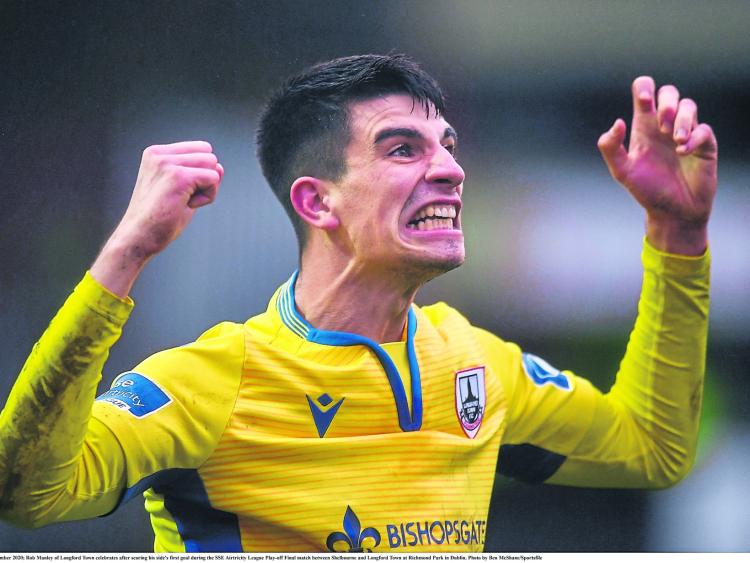 Striker Rob Manley has re-signed for Longford Town as the preparation starts for the return to the Airtricity League Premier Division in 2021.

The versatile Dean Byrne is also back for another season with the midlands club as the build up begins for the top flight campaign and the visit of Shamrock Rovers and Dundalk to Bishopsgate will be a major attraction next season.

The 2021 SSE Airtricity League Premier Division campaign is scheduled to start in February and the hard work begins now for the club management, Daire Doyle and his staff, and everyone involved with the club.

No matter where you go around the town and county, everyone is delighted to see Longford back in the top flight and we are all genuinely interested in having senior football at the highest level at Bishopsgate Stadium.

Personally, I have received so many lovely congratulatory messages from locals but also from all around the country from clubs in both divisions and from supporters in junior leagues in the midlands.

I have received many messages from supporters regarding the new season, mainly about season tickets, replica gear, general merchandise and also about membership of the supporters club.

The fantastic victory over Shelbourne in the recent promotion/relegation play-off was a huge boost for the club and great credit to manager Daire Doyle and his assistant Johnny Martin who instilled the belief into the players to get through the very tough battle of winning a place in the Premier Division.

The three play-off games were like Cup finals and the players showed great spirit and character to emerge victorious in returning the club to the top flight for the first time since 2016.

Quite a few of the clubs in both the Premier and First Division are announcing players retained and also new signings and there are some exciting moves at this moment in time.

Galway United have confirmed that they will be a full time club next season which is a major move from John Caulfield’s team.

One player who has been mentioned in a lot of clubs is striker Dinny Corcoran who it seems is being allowed to leave Bohemians as are another few of the club’s most experienced players.

Bohs were the closest to the current Premier Division champions at the end of the season, eleven points behind Stepen Bradley’s impressive side who went through the season unbeaten.

Dundalk were a further seven points adrift in third position and they will be hoping to end the season with a trophy when they take on the double seeking Shamrock Rovers in the FAI Cup Final at the Aviva Stadium on Sunday evening next.

Looking forward to next season, one has to say that Rovers will be difficult to dethrone in the battle for the Premier Division title.

There is no doubt that Republic of Ireland international Jack Byrne is the real Rovers star in their awesome array of talent and he could be on his way to one of the championship clubs in the English League.

The 2020 runners-up Bohemians also have a lot of talented young players in their squad but they also had Dinny Corcoran, Keith Ward, Keith Buckley and Rob Cornwall to add experience to a strong squad.

Last year’s Premier Division champions Dundalk were not up to the high standards of previous seasons in the league but ended up playing in the group stages of the Europa League which was a brilliant achievement.

Nobody can argue with the fact that Shamrock Rovers and Dundalk are the strongest teams in the Premier Division and look set to battle it out for the league title.

Dundalk have a powerful squad packed full of experienced players from keeper Gary Rogers to Pat Hoban up front. The Louth club broke a goal scoring record in the FAI Cup when they showed no mercy in hammering First Division rivals Athlone Town 11-0 in the semi-final on Sunday evening last.

Sligo Rovers finished fourth in the Premier Division this season, just a point behind Dundalk, and the Connacht club were also in FAI Cup action on Sunday last in losing 2-0 against Shamrock Rovers in the other semi-final.

Sligo are the standard bearers for the West of Ireland in the Premier Division and they will be a great attraction when they come to Longford next season, if and when we can accommodate fans at our games in compliance with Covid-19 restrictions.

Over the years Sligo had a name for bringing in foreign players and this season was no different but they also have many young local players getting their chance in a good squad.

Waterford finished 5th in the table, just one point behind Sligo, and this was a fine achievement as they just missed out on a place in Europe.

The southern club have plenty of potential despite a lot of unrest behind the scenes, highlighted by the decision of former Longford player Alan Reynolds to quit as the blues manager midway through the season.

St Patrick’s Athletic ended up in sixth place, three points behind Waterford, and will be hoping for a higher finish next season under the guidance of former Dundalk star Stephen O’Donnell.

Seventh in the table were Derry City, managed by Declan Devine, ended the season with 20 points and got dragged into a relegation battle which would not have pleased the power brokers at the Brandywell.

Eight in the table were Finn Harps who made a massive effort to retain their Premier Division status and it is all down to inspirational manager Ollie Horgan who has done an amazing job with the Donegal club.

The top flight next season will also include the 2020 First Division champions Drogheda United and looking at the overall picture, Longford Town are facing strong opposition in their quest to survive in the top flight.

Almost everyone is saying that the Town should aim to be outside the bottom two at the end of the season but the way I personally look at it we should be aiming to be in mid-table, say fifth to seventh, and I think we will be capable of doing that.

With that target in mind, we will need to raise much needed funds to realise our ambition.

We are asking for our fantastic supporters to get behind the team in the New Year as Longford Town FC prepare for the eagerly awaited return to the Premier Division.