Promotion to the Premier Division a brilliant achievement 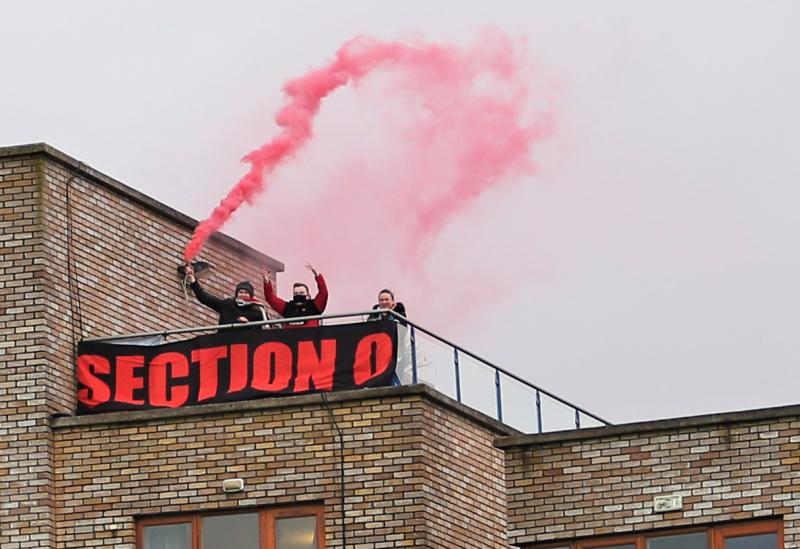 Longford Town FC celebrated another terrific triumph in their proud history when they beat Shelbourne 1-0 in the promotion/relegation play-off at Richmond Park, Inchicore on Sunday last.

This fantastic result means that the Town will be back playing in the Premier Division for the first time since 2016 after finishing fourth in the First Division this season.

The play-offs offered Longford another route for a return to the top flight and this brilliant achievement all started in the remarkable 3-2 win over UCD after extra-time at the Belfield Bowl.

Substitute Dean Byrne, who sustained a serious injury in the opening game of the Covid-19 delayed season against Shamrock Rovers II at Bishopsgate back in February, scored a sensational winning goal with virtually the last kick of the game.

Defender Joe Gorman was the saviour in normal time, snatching the equaliser in the 90th minute when all seemed lost, and he scored again in extra-time after UCD had regained the lead.

The next game was back at the UCD Bowl against a fast improving Galway United side who had inflicted a heavy 6-2 defeat on the Town when they clashed in the league fixture at Bishopsgate a few weeks earlier.

Longford came out in a very determined manner in their bid to make amends and broke the deadlock just before the break when Karl Chambers finished the ball to the net to give his side a deserved lead.

The Town got a second goal in the 81st minute with Aodh Dervin on target from a well struck long range strike but there were some anxious moments when Galway scored in the 88th minute.

Longford held out for the victory and the opposition in the promotion/relegation play-off turned out to be last year’s First Division champions Shelbourne who finished second from bottom in the top flight this season.

Under the guidance of rookie manager Ian Morris, Shels gained automatic promotion last season and some shrewd signings were made to strengthen the squad, most notably former Town player Gary Deegan who returned home after enjoying a good career in the English League.

Unfortunately for Shels, the physically strong midfielder Deegan was suspended for the make or break match against Longford Town who were forced to field without the injured Sam Verdon with the versatile player a big loss.

Town manager Daire Doyle started the same team for the third game in the play-offs and they lined-out at Richmond Park in a confident frame of mind with a lot of momentum.

The records will show that Longford won 1-0 in another famous success with Rob Manley scoring the decisive only goal but it was a great team effort as the club made it through to the top flight next season.

It was also a fantastic team effort from the management who guided the Town back into the Premier Division but the hard work starts now in preparation for the eagerly awaited 2021 league campaign.

Some new signings are sure to be made in order to strengthen the squad and hopefully Longford will be good enough to consolidate their hard earned Premier Division status.

At this stage it would be very unfair to pick out certain players but the win over Shels on Sunday last must have a special place for local lad Aodh Dervin.

Aodh has been a Town supporter from a very young age and has grown in stature as a player of immense quality, clearly reflected in some outstanding performances this season.

It's the ambition of every young player to make it to the top and Dervin has done that with his local club with Premier Division football the next step.

All involved with Longford Town FC deserve a lot of credit for the success and promotion is the richly deserved reward for a lot of hard work both on and off the pitch.

After all the disruption of our games this season due to the Covid-19 pandemic, thanks is extended to the Longford Town supporters who have been behind the club no matter what has happened in this very strange year.

During the two lockdowns, the loyal fans could not attend the home games in compliance with the different restrictions but hopefully that will change when the Town return to the Premier Division next season.

A special word of thanks to all the supporters who came out in such big numbers for the victory drive parade through the streets of the town on Sunday night which was organised by Tiernan Dolan and the Supporters Club at such short notice. Apologies to some supporters who did not find out until it was too late.