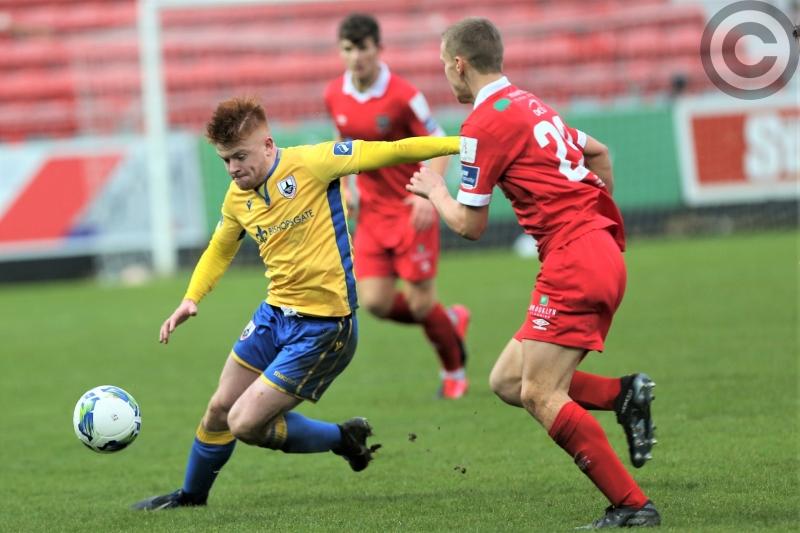 On Sunday last Aodh Dervin’s dreams of playing Premier Division football with his boyhood club became a reality when Longford Town defeated Shelbourne in the  promotion/relegation play-off final at Richmond Park. After the final whistle a very hoarse Dervin still couldn’t believe what the Town had achieved.

Before the UCD game two weeks ago the Longford Town players had a talk and realised what was at stake and the prize at the end.

Dervin said: “It was a restart of our season. We knew we had to go at it and we did. We all got together and realised what it was. We all worked together. I’m so proud of them. So proud of everyone involved with the club.”

There had been questions asked of the team after the defeats against Galway United and Cobh Ramblers last month. Dervin stated that in the last three games the players showed just what they can do and they did it with character and heart.

He said: “People were questioning us; if we had heart or not. I think these last three weeks we showed that we had more than that.

“Obviously we didn’t go up the way we wanted to (as First Division champions) but we are not thinking of that now. This feeling is unbelievable. The work that we have put in. Playing with your best friends; you would’ve done everything for them.”

It was two former players that helped guide Longford back to the Premier Division; manager Daire Doyle and his assistant John Martin. Both players suffered relegation with the Town back in 2007 and Dervin couldn’t praise the duo highly enough.

“Johnny and Daire, no two deserve it more. The work they have put in with us; zooms, pitch sessions, individual sessions. Absolutely brilliant mentors,” said the Town midfielder.

One thing that has been noted about the Longford squad is the camaraderie and the togetherness; so evident during the last number of games.

Dervin applauded his team-mates: “There has been nothing wrong with the dressing-rooms I have been in but this is the best one by far; dead on their feet and still doing those runs because they know what it means.”

The one downside to Sunday’s promotion was the fact that Town fans weren’t in Richmond Park to savour the moment.

Dervin said: “It feels great but it would’ve been so much better and so special with fans being here. It still can’t take away the feeling we are going up to the Premier Division, that’s what we all wanted.”