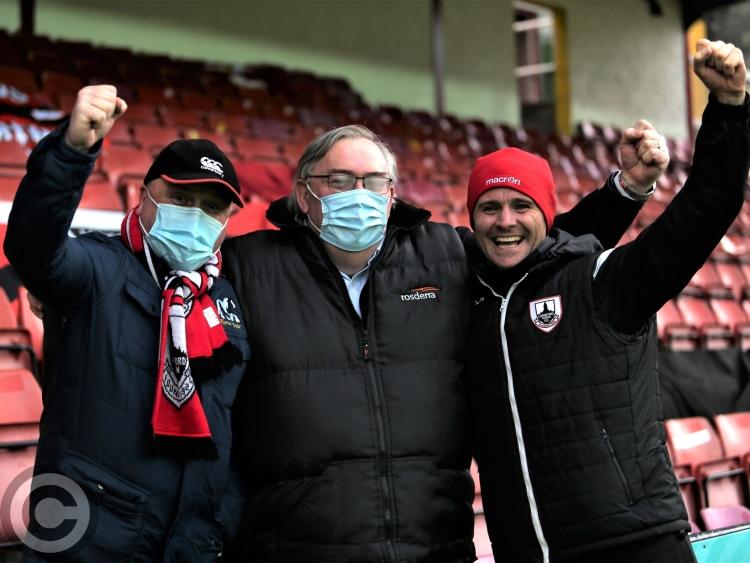 Before the start of the season Longford Town manager Daire Doyle mentioned the hurt of losing the First Division play-off to Cabinteely last year and how that defeat could drive them on.

Last Sunday De Town made up for that disappointment by defeating Shelbourne in the promotion/relegation play-off final on the way back to the Premier Division.

Doyle said: “This is a culmination of all the hard work and effort we have put in. We have achieved a special promotion.

“The feeling in this group after what’s happened and how we have got it and the dramatic stuff at UCD, the controlled performance against Galway.

“We’ve come in here today against a Shelbourne side and I thought we played all the football.

“One huge thing we had, if you watched us in the second half, was how much they were prepared to work for each other.

“That’s what’s won us the game today on top of me having a brilliant team who are fully deserving of where we have ended up.”

Being inconsistent was something that irked Doyle but in the last three games the Town have put in excellent performances in ensuring they achieved their aim.

“I had full belief in this group of players at the start of the season. Inconsistencies cost us challenging at the top end of the season but look where we are now. It’s marvellous to be back in the top flight,” the Town boss said.

It’s over one year since Doyle was announced as Longford manager. Having played with the club he knows exactly what Premier Division football means to everyone connected with the Town.

“It’s huge for the club now. The facilities, the people we have in the background, the staff I have involved, the players; there are some magnificent people involved in this club. It’s a fantastic club and we will now be at the top table next year.

“I hope to God we can get crowds back in next season because after missing out this year on everything, they deserve it.

“We’ll look to kick on. We have to, there is a lot of work to be done now after today. We’ll enjoy today, we’ll celebrate. I’m sure I’ll be busy over the coming weeks preparing for next season.”

Shelbourne showed how tough it is to maintain a place in the Premier Division; they won the First Division title  last year and suffered relegation on Sunday.

Doyle is realistic about what’s needed for the Town to compete. He said: “There is so much work that needs to start now; recruitment and maintaining the players that we have.

“It’s going to be key over the coming weeks. Getting ourselves in a good place so that when we do come back that we’ll give ourselves the best chance.

“You can rest assured we’ll do everything we can to be as competitive as possible next year and we want to be.

“We don’t want to be going up to make the numbers up, we’ll be going up to go and perform and play against the strong teams in the Premier Division.”