Longford Town battle it out with Shelbourne for Premier Division status 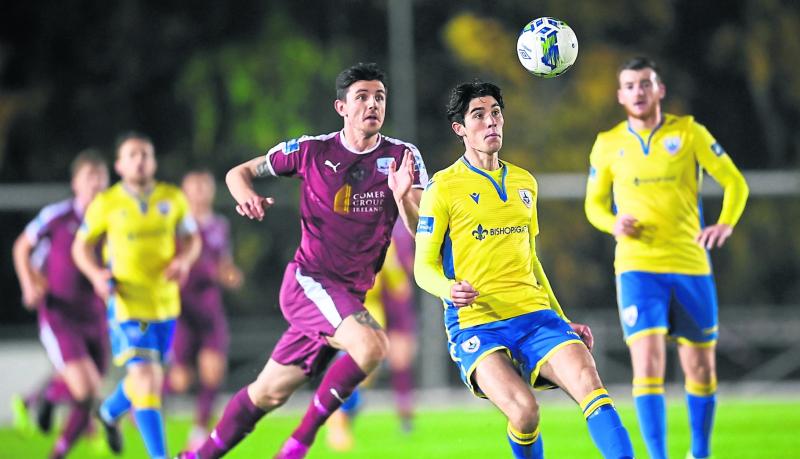 Shelbourne, who finished second from bottom in the Premier Division following a dramatic finish to the Airtricity League on Monday night last, are the opposition for Longford Town in the promotion/relegation play-off final.

This massive match will be played at Richmond Park, Inchicore this Sunday with the behind closed doors fixture kicking-off at 2.30pm.

Shels needed at least a draw against the unbeaten champions Shamrock Rovers in their final round game to avoid a relegation battle but lost 2-0 at Tolka Park.

And with Finn Harps hanging on for a 1-0 win at home to Waterford, the remarkable Donegal club have survived in the top flight for another season under the driving force of their inspirational manager Ollie Horgan.

It has been a fierce struggle for Shels in the closing stages of the season and things reached a very low ebb when they crashed to a shocking 4-1 defeat against First Division opponents Athlone Town in the recent FAI Cup quarter-final.

And to make matters worse for the Dublin club, their dynamic captain Gary Deegan is ruled out of the promotion/relegation clash after he was sent-off (second yellow card) late in the game against Shamrock Rovers on Monday night.

Longford Town will carry a lot of momentum into the make or break showdown against Shelbourne following the great wins over UCD and Galway United in the First Division play-offs.

The midlands club are just one step away from a return to the Premier Division for the first time since 2016 and it is a pity that no supporters will be allowed to attend the big match in compliance with the current Covid-19 restrictions.

Gary Deegan is one of five former Longford Town players in the current Shelbourne squad and the physically strong midfielder will be sorely missed.

Keeper Jack Brady, who started his senior football career in the League of Ireland with Shels, joined Longford in 2016 and then had a spell with Limerick before returning to the Dublin club.

Former Town defenders Daniel O’Reilly and Aidan Friel were in the Shels squad against Shamrock Rovers while striker Aaron Dobbs was also on the bench and was brought on in the 60th minute on Monday night.

Shelbourne will go into the play-off as favourties with the experience of playing in the top flight this season and were without the experienced Ryan Brennan against Shamrock Rovers while Georgie Poynton was also missing.

Former Cobh Ramblers players Jaze Kabia and Denzil Fernandes were also absent from the Shels squad on Monday night and it is a sticky situation for manager Ian Morris at the moment in his bid to stop the slide.

Having said that, the Shelbourne supremo has a couple of very experienced strikers in Karl Sheppard and Ciaran Kilduff to call upon while another key player is Oscar Brennan in the midfield sector.

On their way to winning the First Division title last season, Shels and Longford clashed in three meetings with the Town winning the first fixture at home on a 2-0 scoreline - the goals coming from Peter Hopkins and Karl Chambers.

Shels won the second game 1-0 at Tolka Park through a disputed penalty converted by Conan Byrne and the Town then lost 2-0 at home to the Dublin club.

Those results are all in the past and the current Longford team were impressive in the 2-1 win over Galway United in the First Division play-off final at the UCD Bowl last Friday night.

The crucial goals were scored by Karl Chambers and local hero Aodh Dervin with Galway scoring in the 88th minute to create a tense finish.

Longford Town manager Daire Doyle will be working with much the same squad for the play-off final with the unfortunate Sam Verdon missing out due to injury.

The versatile Verdon is a big loss, particularly with his ability to score crucial goals.

Adam Evans will hopefully be back in contention to feature in the showdown against Shels after missing the Galway game.

Promotion was always the target for boss Doyle and let’s hope that Longford Town will be playing in the top flight next season.

Footnote: Spare a thought for all those loyal Longford Town supporters who cannot be at the game due to the current coronavirus  pandemic but there will be some buzz at Bishopsgate next season if a return to  the Premier Division becomes a reality.