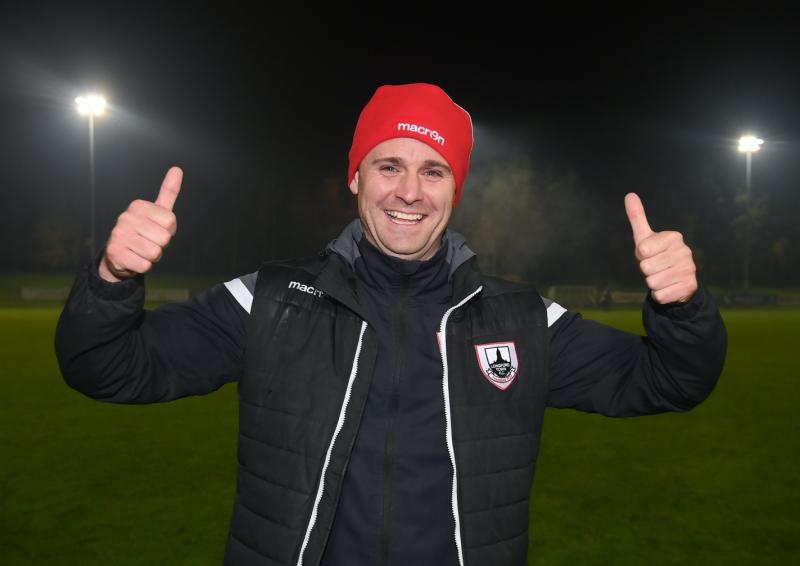 Daire Doyle suffered the heartbreak of relegation with Longford Town in 2007 as a player. Now back as the manager of the midlands club, he wants nothing more than his side to get promoted back to the Premier Division.

Longford Town take on Shelbourne on Sunday next in the Airtricity League Promotion/Relegation play-off final in Richmond Park, Inchicore (kick-off 2.30pm) and boss Doyle is hoping the club can achieve their aim of promotion.

“I’d love nothing more. That has always been my aim. We have fallen short in play-offs and this year we are just one game away from making it through to the top flight.  I’d love to take our club back to the Premier Division. The facilities and everything we have are fantastic and are improving. The players and everyone involved want us to get there and will do all they can to achieve that.”

After a reason of inconsistencies, the Town have produced two fine performances in getting to this stage. This is something that has really pleased Doyle.

“We are delighted to get to this game, that’s what we wanted to do when we knew we were in the play-offs at the end of the season. We were delighted to get through against UCD and against Galway. They called the game a final and there was no celebration in winning that match; you get nothing for it except get through to the next round.”

Last Friday night’s game against Galway United was billed as the First Division play-off final but there was no silverware on offer, just a place in this weekend’s promotion/relegation final where the major prize is a place in the Premier Division.

Doyle said: “It’s all about this weekend and this is the ‘proper’ final. Everything is resting on it; whether a team is promoted or relegated. This is the one match we need to do the business in after some good performances in getting this far.”

Shelbourne are a former club of Doyle’s and despite finishing in 9th place they were competitive in the Premier Division this season.

The Town manager said: “The standard, quality and intensity of Premier Division level is beyond our league. We have to be realistic about it. Shels were very competitive against most of the teams and can count themselves unfortunate that they finished in 9th place; that was due to Finn Harps having a really strong finish. We face a Shels side who have Premier Division experience and some good players. We know it’s going to be a difficult game.

Longford Town started training for the 2020 season this time last year. The target was promotion and they are just one win away from achieving that aim.

Doyle said: “It does take a lot of commitment and effort but the great thing about all that is when you get performances and results that put us in the position that we are in now, all the hard work and commitment that has gone into it, it’ll all be worth it.

“That’s why we do what we do so that we can play in big games like Sunday. To give ourselves a chance and put ourselves amongst the best teams in the country. If we can do that for our club and for Longford there’d be nothing that would make me happier.”