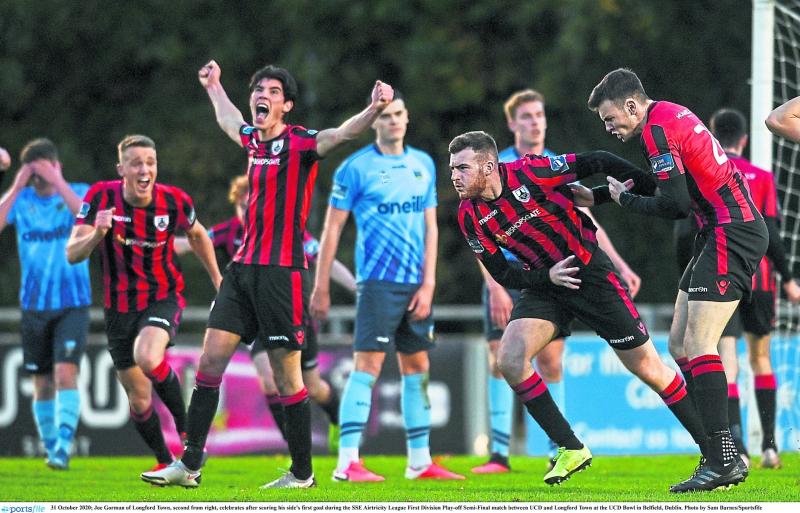 Longford Town are heading back to the UCD Bowl this Friday night to take on Galway United in the First Division Promotion play-off final, kick-off 7.45pm.

Last Saturday at the same venue the Town came from behind twice to score a great win over UCD after extra-time with Dean Byrne blasting a spectacular shot to the back of the net with virtually the last kick of a dramatic match.

There were many heroes for Longford but the goalscorers deserve special mention. Joe Gorman was the saviour with the equaliser as the clock ticked down in normal time and he struck again in the additional period after UCD went back in front.

A penalty shoot-out was looming before substitute Dean Byrne scored an absolutely stunning goal with time almost up to spark sheer delight for Daire Doyle’s side who advanced to meet Galway United as the battle continues for a place in the Premier Division.

Adam Evans missed the game against UCD but should be fit enough to be included in the squad for the big match this Friday night.

When the Town played Galway United at Bishopsgate a few weeks ago a second half collapse saw the home side crash to a demoralising 6-2 defeat in what was a freak result, taking into account that Longford led 2-0 at one stage of the game.

When the teams clashed at Eamon Deacy Park earlier in the season, the Town came away with a slender 1-0 victory with substitute Aaron McCabe scoring the winning goal in the 82nd minute.

Galway proved in the previous meeting at Bishopsgate that they are a much improved side since former Cork City supremo John Caulfield was appointed the manager at a time when the club were struggling badly in the bottom half of the table.

Let’s hope that Longford have learned from their recent mistakes and really need to be at their best to beat Galway to determine who moves on to meet the second from bottom team in the Premier Division (probably Finn Harps or maybe Shelbourne) in the promotion/relegation play-off the following weekend.

Galway have many experienced players in their squad with a solid defence, clearly reflected in their 1-0 win over Bray Wanderers in the other First Division promotion play-off semi-final on Saturday last.

Keeper Schlingerman, Marc Ludden, Stephen Christopher, Shane Duggan and Enda Curran are the backbone of the Galway United team and the Tribesmen will be difficult to beat.

Having said that, the Town will have gained a lot of momentum from the so determined manner that got them past UCD and the players will be in a fairly confident frame of mind for the next step on the road back to the top flight in the Airtricity League.