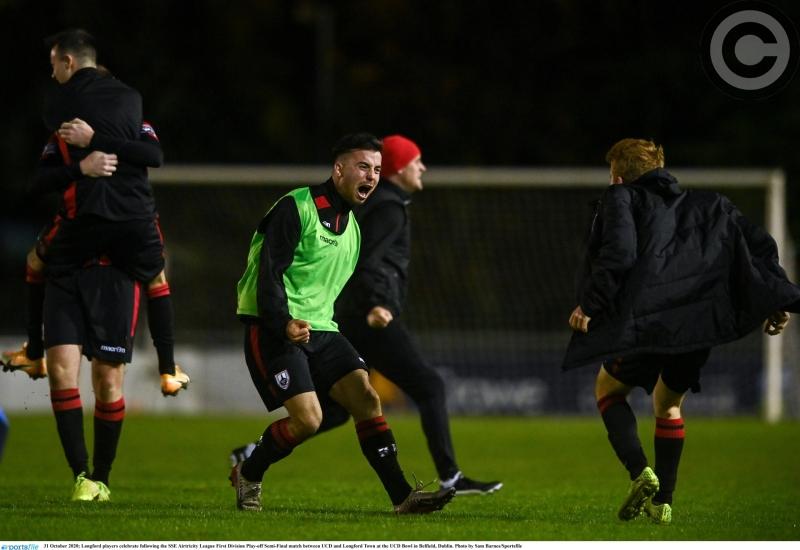 A stunning strike from Dean Byrne in the final minute of extra-time saw Longford Town snatch a wonderful win over UCD in a sensational finish as the midlanders advanced to the First Division promotion play-off final against Galway United next Friday night.

It was the first time that Daire Doyle’s side were ahead in a remarkable game at the UCD Bowl on Saturday. Joe Gorman had come to the rescue twice for Longford, scoring the equaliser in the 90th minute when all seemed lost and his second in the 114th minute to level matters once again before Byrne struck for the last gasp winner.

UCD were the better side in the first half. Colm Whelan should have done better for the students in the early exchanges while Karl Chambers shot over the bar in a Town attack on six minutes.

On 18 minutes UCD were awarded a free-kick which was taken by Paul Doyle to connect with the head of Whelan who directed the ball past Town keeper Lee Steacy to give the home side the lead.

On 23 minutes a good ball from Aodh Dervin found Rob Manley but from a tight angle he hit his effort wide. The Town should have equalised with time running out in the first half when the ball broke to Karl Chambers but he blasted his shot over the bar with the net at his mercy.

Just before the break, UCD had a great chance to score a second goal but Dean Zambra was the saviour in clearing the ball off the line.

Longford dominated the early stages of the second half. Aodh Dervin shot over the bar on 51 minutes before Joe Manley’s effort was blocked down by UCD defender Josh Collins while in the 57th minute the College keeper Lorcan Healy tipped Dylan Grimes free-kick over the bar.

On 59 minutes Rob Manley was upended by Luke Boore in the box but referee Kevin O’Sullivan waved away a strong claim for a penalty for the visitors.

The Town kept pressing and on 70 minutes Grimes hit a free-kick that just curled around the post.It was all Longford but UCD tried to catch them on the break.

On 89 minutes Yousef Mahdy put his effort over the bar and moments later the Town snatched a dramatic late equaliser from a Joe Gorman header following a corner.

Substitute Dean Byrne had a great chance to put Longford in front in the second minute of extra-time but he was denied by an excellent save by the UCD keeper.

Just before half-time in extra-time Dara Keane had an effort for UCD that went wide but the home side went back in front in the 110th minute when Yousef Mahdy found the back of the net.

But gutsy Longford Town just refused to accept defeat and it was that man again, Joe Gorman, who hit the target from another header following a corner in the 114th minute.

A penalty shoot-out looked certain at this late stage but there was another twist in this tremendous tale.

Dean Byrne stepped up to blast a rocket of a shot past the UCD keeper Lorcan Healy to move Longford Town a step closer towards a possible place in the Premier Division next season.