Away to UCD on Saturday night 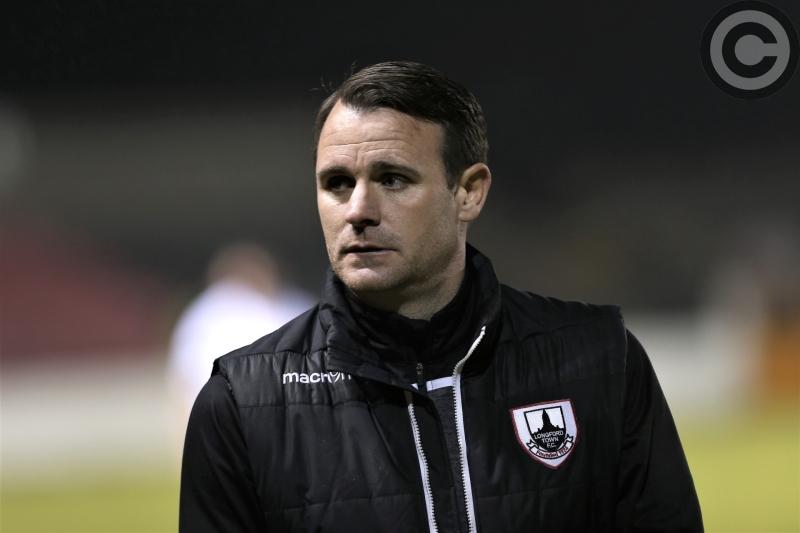 Longford Town manager Daire Doyle, who has guided the club into the First Division promotion play-offs despite the defeat against Wexford Picture: Syl Healy

Longford Town were living dangerously in their quest to make it through to the First Division promotion play-offs but ended up in fourth position in the table despite the defeat against Wexford at Ferrycarrig Park on Tuesday night.

Results elsewhere in the tension packed final round of fixtures worked out well for Daire Doyle’s side who will head to the College Bowl on Saturday night to take on UCD in the hope of moving a step closer in the direction of possible Premier Division football next season.

No less than five regulars were missing from the Longford Town team for the crucial clash against Wexford with suspension ruling out both Aodh Dervin and Mick McDonnell while injury sidelined Dean Byrne, Shane Elworthy and Sam Verdon.

The Town had taken an early lead through Dylan Grimes from a cracking free-kick but despite making a good start to the second half they found themselves trailing after 65 minutes after Karl Fitzimons and Jack Doherty scored goals for Wexford.

Wexford keeper Tom Murphy was immense for the remainder of the match as Longford piled on the pressure in search of the equaliser but were denied by the excellent Murphy on a number of occasions.

The Town started well with a shot from Matthew O’Brien tipped over the bar by the Wexford netminder before the visitors broke the deadlock in the 12th minute. Aaron McNally was fouled on the edge of the box and Dylan Grimes found the back of the net from a very well struck free-kick.

On 35 minutes the home side had their first opportunity when Karl Fitzimons played the ball into Jack Doherty but he hit his effort over the bar.

Minutes later Doherty was fouled and hit the free-kick straight at Town keeper Lee Steacy while on 39 minutes Adam Evans had a chance for Longford but his effort was saved by the inspired Wexford keeper.

The Town started the second half well with Aaron McNally making a terrific run but his shot let him down as the ball went wide.

Niall Barnes then hit the woodwork on 49 minutes before Rob Manley worked hard to keep possession moments later and played the ball back to McNally but his effort was poor.

Longford were left to rue those missed chances as Wexford got back on level terms. Charlie Smith worked hard to earn Wexford a corner on 53 minutes. Conor Crowley floated the ball into the box and it met the head of Karl Fitzimons at the far post who made no mistake.

Wexford took the lead in the 65th minute when Crowley’s free-kick was headed into the net by former Longford player Jack Doherty.

The Town piled on the pressure in a determined bid to earn a draw but could find no way past the outstanding Wexford keeper Murphy who produced a superb save to deny Dylan Grimes from a free-kick on 85 minutes and soon after he did brilliantly to stop Niall Barnes from scoring the equaliser in the tense and exciting finish.

Kick-off times to be confirmed