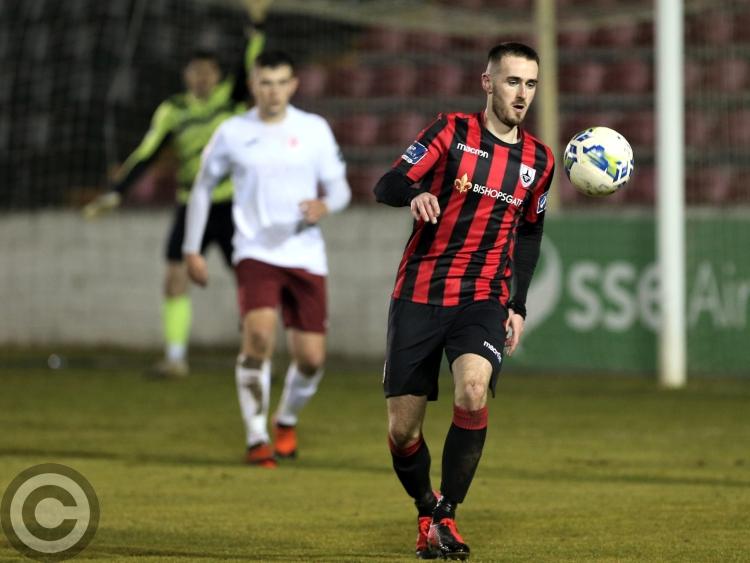 Shane Elworthy pictured in action for Longford Town against Cobh Ramblers in the last home league game of the season at Bishopsgate on Saturday night Photo: Syl Healy

Longford Town crashed to another costly home defeat with Cobh Ramblers coming away from Bishopsgate on Saturday night with a crucial win to keep alive their hopes of a place in the First Division promotion play-offs.

The Town could have made sure of a top five finish with a result in their last home league game of the season but must now sweat it out in the need to pick up at least a point in their remaining fixture against Wexford at Ferrycarrig Park.

After they fell behind to an Ian Turner goal in the 48th minute the home side didn’t create anything to trouble Cobh keeper Sean Barron.

Chances were scarce in the first half with the visitors coming close to scoring on a couple of occasions.

In the sixth minute Dylan Hand had a header saved by opposing keeper Barron.

Longford were nearly caught out in the 11th minute when a poor backpass was picked up by Naythan Coleman but Town keeper Lee Steacy bravely deflected the ball out for a corner.

Adam Evans did well in the 24th minute to fire a cross into the box that was deflected out for a corner. The danger wasn’t cleared properly from that corner with the ball breaking to Joe Manley but his shot just went wide.

In first half stoppage time Cobh were awarded a free-kick which Ian Turner took but his well struck effort hit the top of the crossbar in a let off for Longford.

Ramblers broke the deadlock three minutes into the second half when Stephen O’Leary played a perfect pass into Ian Turner and he made no mistake in shooting past Lee Steacy.

That proved to be the decisive matchwinning goal and while the Town pressed for an equaliser in the closing stages of the game, Cobh held out for a vital victory.