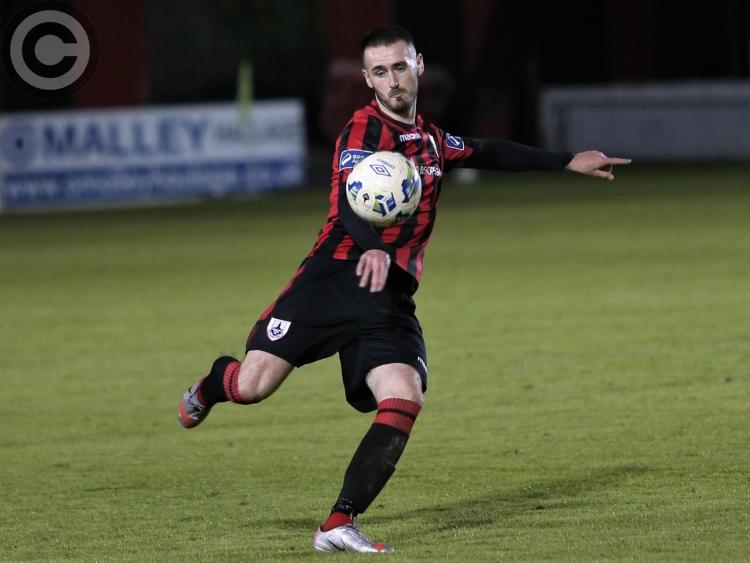 Longford Town play their final home game of the season in the 2020 First Division campaign against Cobh Ramblers this Saturday night (kick-off 7.30pm) with Daire Doyle’s side seeking a win at Bishopsgate to make absolutely sure of their place in the promotion play-offs.

Over the years Cobh have been one of the toughest teams to beat, especially at St Colman’s Park, and they have a big catchment area to sign the local talent with only Cork City in direct competition for senior players.

Last Friday night the Town were in action against Cabinteely and were without injured players Dean Zambra and Sam Verdon who both sustained knocks against Galway United the previous week.

Daire Doyle is fortunate to have a very strong bench and he brought in Aaron McNally and promising youngster Matthew O’Brien into the midfield sector alongside Aodh Dervin.

The Longford Town team against Cabinteely showed another change with Dean Byrne starting in place of teenage striker Aaron McCabe.

The return of Byrne was a big boost after he was rested for the game against Galway as he recovers from the serious injury he sustained against Shamrock Rovers II at the start of the season.

Matthew O’Brien was credited with the goal that broke the deadlock in the 17th minute of the crucial clash against Cabinteely and Rob Manley came back to haunt his old club when scoring twice in the  closing stages of the game, the first from a penalty, in the eventual 3-0 win.

Some good news on the injury front with Lido Lotefa brought on late in the game at Stradbrook as the Town bounced back from the devastating defeat against Galway.

Cobh come to Longford in good form after their most emphatic 4-0 win over Wexford at Ferrycarrig Park on Friday night last with three goals coming in the first half.

Daryl Walsh opened the scoring in the 5th minute with Conor Drinan scoring the second goal on the half hour mark. Pierce Phillips extended the advantage five minutes later and the rout was complete with Stephen O’Leary getting the fourth goal in the 52nd minute.

That result puts Cobh on 23 points, the same as fast improving Galway United, with both clubs three points behind UCD and Cabinteely in the fierce battle for places in the promotion play-offs.

Longford played Cobh at St Colman’s Park in August and were beaten 2-0 in a disappointing display. The goals for the home side were scored by Conor Drinan and Stephen O’Leary.

Cobh are generally a young squad with most of their players coming through from the club’s U-17s and U-19s.

Keeper Sean Barron, who previously played with Cork City, was also with Waterford and Munster senior league side Avondale. Former Town player Paul Hunt was the regular Cobh netminder but does not seem to feature this season.

Former Cork City, Limerick and St Pat’s player Ian Turner is the vital cog in the midfield area while Conor Drinan is clearly a threat in the Rambers attack.

The Town will need to be wary about the challenge they are facing against Cobh in the quest for at least a third place finish and hopefully another vital victory will materialise at Bishopsgate on Saturday night.