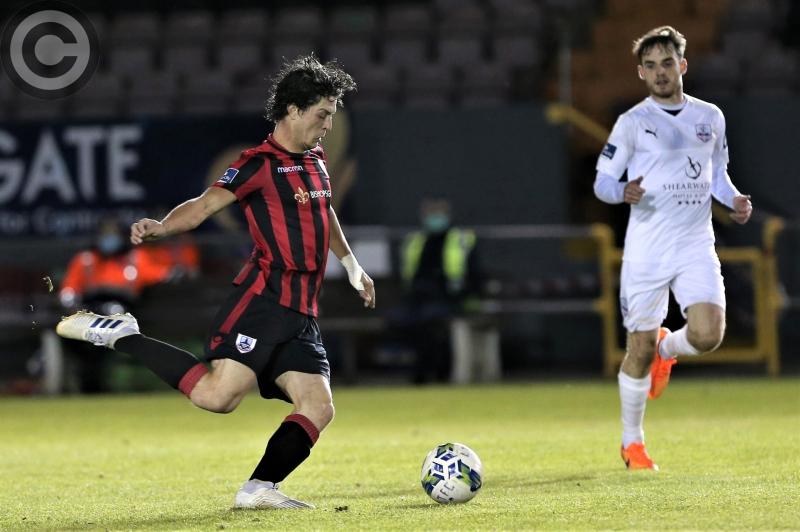 Five second half goals saw Galway United come from behind to inflict a humiliating defeat on Longford Town at Bishopsgate on Saturday night as their hopes of winning the First Division league title were shattered.

The Town were looking good in the first half when goals from Rob Manley and Adam Evans put the home side in what appeared to be a comfortable position but they collapsed completely on the changeover.

Galway were poor in the first half but were an entirely different proposition in the second half as their vastly experienced manager John Caulfield plotted a remarkable revival to keep their promotion play-off hopes alive.

Longford got off to a great start and took the lead in the sixth minute; Aaron McCabe had his effort saved by Galway keeper Michael Schlingermann and Rob Manley pounced on the loose ball to finish to the net.

In the 33rd minute the Town scored a second goal when a long kick-out by Lee Steacy found Adam Evans and he blasted the ball to the net from a tight angle.

Although they created very little, Galway got back into contention just before the break when Marc Ludden scored from close range after a goalmouth scramble.

Two minutes into the second half the visitors were on level terms when Ludden was on the mark again after capitalising on a rare mistake from Lee Steacy who dropped the ball.

Galway then took the lead in the 58th minute when influential substitute Carlton Ubaezuonu was on target with an excellent finish.

Dylan Hand went close for the Town in the 69th minute but Galway keeper Michael Schlingermann saved his side when he superbly tipped the ball over the bar.

Galway scored a fifth goal in the 79th minute through Wilson Waweru and one minute later Ubaezuonu completed his hat-trick on a terrible night for Longford Town who now face a battle for a place in the promotion play-offs.