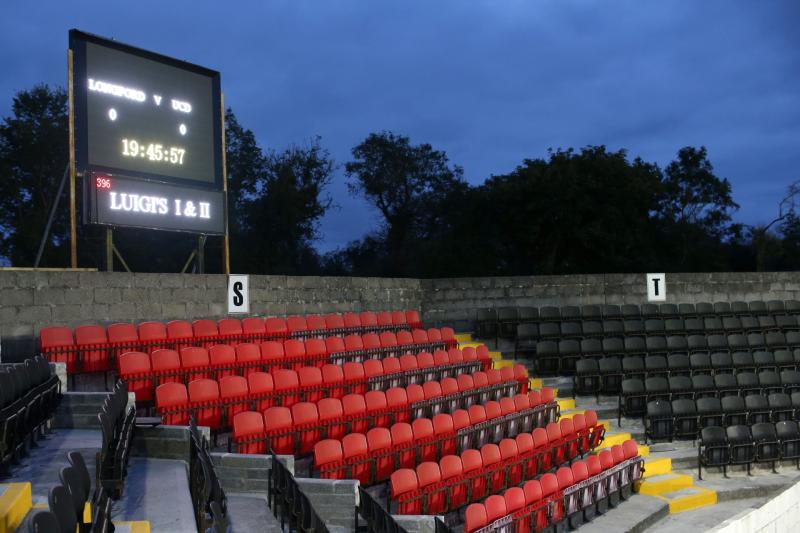 A section of the refurbished new seating at the scoreboard end of the Longford Twn FC grounds which brings the official capacity at  Bishopsgate up to the 5,000 attendance figure Pic: Syl Healy

Longford Town face Galway United at Bishopsgate this Saturday night (kick-off 7.30pm) and while the visitors were on a great run under new manager John Caulfield they crashed to a surprise defeat at home to Cobh Ramblers last weekend.

Galway’s rapid surge up the First Division table has been halted for the moment but they will be more determined than ever to get back on track against Longford in the chase for a place in the promotion play-offs.

There were some strange results in the First Division last weekend with all the away teams winning which must be a once off.

The big game was in Bray where the Wanderers entertained Drogheda United in a massive match for both clubs. Drogheda won 1-0 with Mark Doyle scoring the decisive goal in the 28th minute.

There were a couple of unexpected results with Cobh beating Galway at Eamon Deacy Park while there was a real shock at Stradbrook with promotion chasing Cabinteely hammered 5-1 by Wexford.

UCD, who lost to Longford on Monday night week last, got their promotion challenge back on track with a comprehensive 5-2 win over Shamrock Rovers II at Tallaght Stadium.

The Town were full value for their 4-0 victory over Athlone on Friday night with Rob Manley breaking the deadlock in the 10th minute.

The second goal did not materialise until the 68th minute, from a penalty converted by Sam Verdon, and Athlone were reduced to 10 men when former Town player Lee Duffy received a red card in the 75th minute.

Moments later Athlone defender Scott Delaney was unfortunate to concede an own goal and the rout was complete when substitute Karl Chambers finished the ball to the net in the 90th minute.

Taking on Galway will be a different proposition and former Cork City supremo John Caulfield is certainly making a big impact with his new club.

Galway had won five games in a row prior to the surprise setback at home to Cobh on Friday night last and will be coming to Longford in a fairly confident frame of mind, knowing that they need a result to remain in contention for promotion.

The recent Galway winning streak included away wins over Cabinteely, UCD and Athlone Town and home wins against Wexford and Shamrock Rovers II.

Goalkeeper Kevin Horgan has been the No 1 with the club for some time but he was replaced by former Waterford netminder Matthew Connor in the 46th minute of the disappointing defeat against unpredictable Cobh who are also in contention for a place in the promotion play-offs.

The Galway defence has been strong this season, backboned by the experienced Marc Ludden and Kevin Farragher, but neither played against Cobh for some reason.

Shane Duggan is very much their main man in the midfield sector alongside former Cobh player Stephen Christopher but Galway will be without Mickey Place against Longford as he was sent-off against Cobh.

Up front Galway have an abundance of experience with Enda Curran and Vinny Faherty clearly a threat with their ability to score the vital goals.

When the clubs clashed at Eamon Deacy Park back in mid-August it was a very close encounter with the Town coming out on top on a 1-0 scoreline.

The matchwinner on that occasion was current U-19 player Aaron McCabe who was brought on to replace Dylan Grimes in the 70th minute and the Cavan lad scored the crucial only goal in the 82nd minute to clinch all three league points for Longford.

Galway will be going all out to gain revenge at Bishopsgate on Saturday in this huge game while another win for Longford will cement their place in the promotion play-offs and keep alive their hopes of winning the First Division title.

Pictured is a section of the refurbished new seating at the scoreboard end of the Longford Twn FC grounds which brings the official capacity at  Bishopsgate up to the 5,000 attendance figure. The work is completed as part of the plan to attract some further underage international fixtures to one of the best grounds in the country. Great credit to all involved for making it happen at such a progressive club Picture: Syl Healy