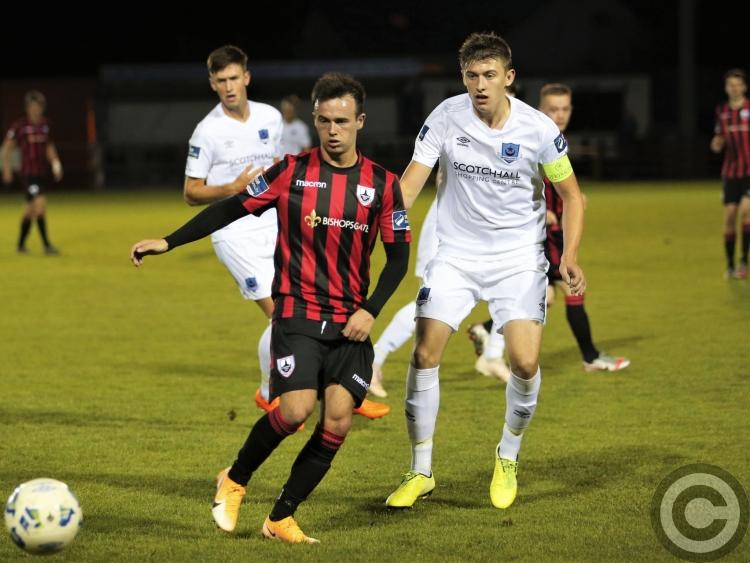 Longford Town had to settle for a draw at Bishopsgate on Saturday night as Drogheda United came from behind to claim a point in the tight battle for the First Division title.

The Town had taken the lead through Rob Manley in the fourth minute but Drogheda drew level in the 51st minute with substitute Jordan Adeyemo scoring the equaliser.

This result leaves Longford in fourth place in the table, three behind the new league leaders Bray Wanderers with the clubs clashing at the Carlisle Grounds next Friday night.

Just four minutes were gone on the clock when Rob Manley opened the scoring for the Town with his fourth goal of the season and third in two games.

Dylan Grimes then had a free-kick that went inches wide in the 11th minute. Drogheda tried to get back into the game with Mark Doyle coming close before Manley should have doubled Longford’s advantage but Drogheda keeper David Odumuso made a fine save with his feet.

Hugh Douglas and Derek Prendergast had chances for Drogheda and while the Town enjoyed a lot of possession they failed to test Odumuso again before the break.

Six minutes into the second half and the visitors got the equaliser. James Brown played a perfect cross into substitute Jordan Adeyemo and he found the back of the net with a fine finish.

Drogheda were a different proposition in the second half with the double change they made at the break making a significant difference. Adeyemo looked lively when he had the ball and eager to get it when he wasn’t in possession.

Aodh Dervin had a stunning shot from distance tipped over the crossbar by Odumuso while a Dylan Grimes corner was fisted away by the Drogheda  keeper in the 73rd minute.

The Town pressed for a second goal but when they went forward Drogheda tried to catch them on the counter attack with Joe Gorman having to intercept Jordan Adeyemo’s ball into the box in the 84th minute.