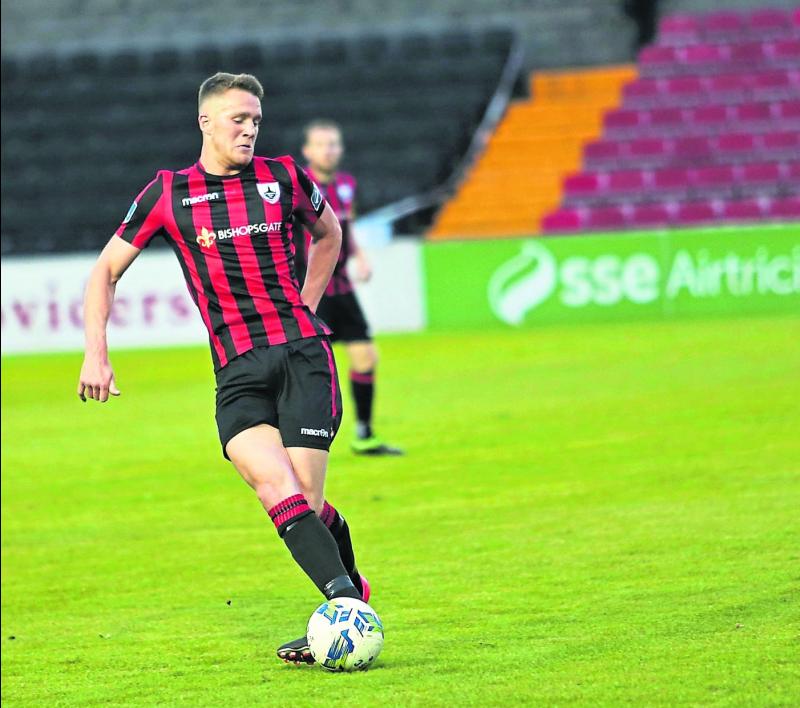 Longford Town, with their confidence boosted after consecutive wins against Wexford and Shamrock Rovers II, are facing a tough task against the title favourites Drogheda United at Bishopsgate this Saturday night, kick-off 7.30pm.

Last weekend there were some surprising results and that is currently the trend in the so competitive First Division.

Drogheda slipped up at home in a disappointing 1-0 defeat on Friday night last against the fast improving Cobh Ramblers side under Stuart Ashton and the battle for the league crown and the promotion play-off places is becoming very intriguing indeed.

Drogheda bounced back  to crush Cabinteely 5-1 at United Park on Monday night last to move to the top of the table, a point ahead of third placed Longford.

It is a very tight league and if the Town are thinking of getting out of the First Division then a home win is needed against Drogheda, managed by Tim Clancy.

Clancy decided he had to strengthen his defence this season and with that in mind he signed Hugh Douglas, Derek Prendergast and Jack Tuite, all recognised defenders who would be well capable of playing in the Premier Division.

Douglas was a regular with Bray for many seasons while Prendergast previously played with Shelbourne, Bohemians and Athlone Town.

Tuite, who was the mainstay in the Cabinteely defence last season, is a former Shels player while keeper David Odomosu has come through from the Drogheda U-19s and is keeping Ross Treacy out of the team.

While the three new defenders could start at Bishopsgate on Saturday night, manager Clancy can also call on ex Shels player James Brown and local hero Conor Kane who is one of the longest serving players on the Drogheda team.

Club captain Jake Hyland is a very good player while Drogheda were delighted to have signed Richie O’Farrell from UCD, rated as one of the top players in the league.

Mark Doyle is now in his fifth season for the Co Louth club and he is a threat up front along with Chris Lyons who is a very talented player with the ability to score crucial goals.

Drogheda have quite a few players in their squad who have come through from the club’s Under 17s and 19s or from other clubs around Dublin.

When the teams clashed at United Park back at the end of February before the Covid-19 lockdown, the Town won a very tight and exciting contest on a 1-0 scoreline with Sam Verdon scoring the crucial only goal in the second round of the league.

Verdon sustained an injury against Wexford on Monday week last and which ruled him out of the game against Shamrock Rovers II on Friday night. Hopefully, Sam will be back for the massive match against Drogheda this weekend.

The Town made the trip to Tallaght Stadium last weekend to take on Aidan Price’s young side, many of whom are eligible for the Rovers U-19s.

Kevin Zeffi, who was brought on against the Town, is only 15 years old and the highly rated rising star scored the goal for the home side in the 77th minute.

There was only one change on the Longford team that started the previous game against Wexford with Dylan Grimes coming in for the injured Sam Verdon.

The last two games yielded a maximum six points for the Town but to be fair the opposition in both those fixtures will not be challenging for promotion at the end of the season.

With that in mind, Daire Doyle’s side are now facing into a difficult run of matches in the next few weeks, starting with the visit of the new league leaders Drogheda to Bishopsgate on Saturday night.

After that the Town travel to the Carlisle grounds to take on Bray  the following Friday night and then a home game against UCD on Monday September 21.

Daire Doyle will be hoping he has a full squad to pick from for those important games. The new system that the manager is operating is working to a point but the team should be scoring more goals.

Having said that, it was great to see Rob Manley scoring twice in the 2-1 win against Shamrock Rovers and the former Cabinteely striker is showing signs of the terrific form that saw him emerge as the top scorer in the First Division last season.

The return of Dean Byrne after a lengthy injury absence is another significant boost in the push for promotion and he could make the difference in Longford’s bid to get back into the Premier Division.