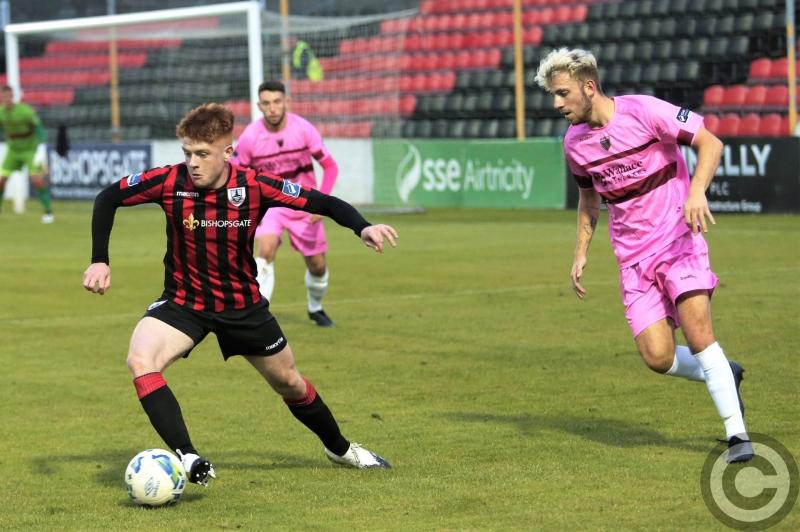 Second half substitute Aaron McCabe was the saviour as Longford Town left it late to clinch a crucial win over Wexford in the 'behind closed doors' First Division league clash at Bishopsgate on Monday night.

Cavan native McCabe was just three minutes on the pitch when he put the Town ahead with a stunning strike in the 86th minute and then just before the final whistle the young Lavey lad scored a second goal to make absolutely certain of the vital three points.

Longford Town have got their promotion challenge back on track after suffering consecutive defeats against Cabinteely and Cobh Ramblers and this badly needed result put Daire Doyle’s side into third position on the table.

It was Wexford who had the first chance  inside the second minute. Former Town player Jack Doherty played a neat ball to Azeez Yussuf but his shot was cleared off the line by Longford defender Joe Gorman.

In the ninth minute Town took the lead when Rob Manley was brought down in the box and a penalty was awarded. Sam Verdon stepped up to make no mistake from the spot-kick.

Wexford battled back to create chances and in the 17th minute Charlie Smith saw his effort go over the bar. Minutes later Doherty and Smith combined but Mick McDonnell blocked down Smith’s effort.

Dean Byrne, back in action for the Town after a lengthy injury absence, blasted over the bar while Dylan Grimes couldn’t direct his header on target. Just before the break Doherty turned and shot but his goal attempt for Wexford was deflected out for a corner.

Both sides had possession in the early stages of the second half but failed to create anything of note. The best chance came when Doherty brought a superb save out of Town keeper Lee Steacy in the 62nd minute.

Wexford eventually levelled matters in the 75th minute; Azeez Yussuf was brought down and Conor Crowley found the back of the net from a deflected free-kick on the edge of the box.

Just when it looked like the game would finish in a disappointing draw on came Aaron McCabe to change the course of the game with a terrific long distance lob over the head of the Wexford keeper Murphy.

In the third minute of stoppage time Rob Manley’s shot was parried by Murphy but the ever alert McCabe pounced to slot the breaking ball into the net.

Next up for Longford Town is a trip to Tallaght Stadium to take on Shamrock Rovers II on Friday night and another victory will certainly boost the confidence factor for a possible title challenge.