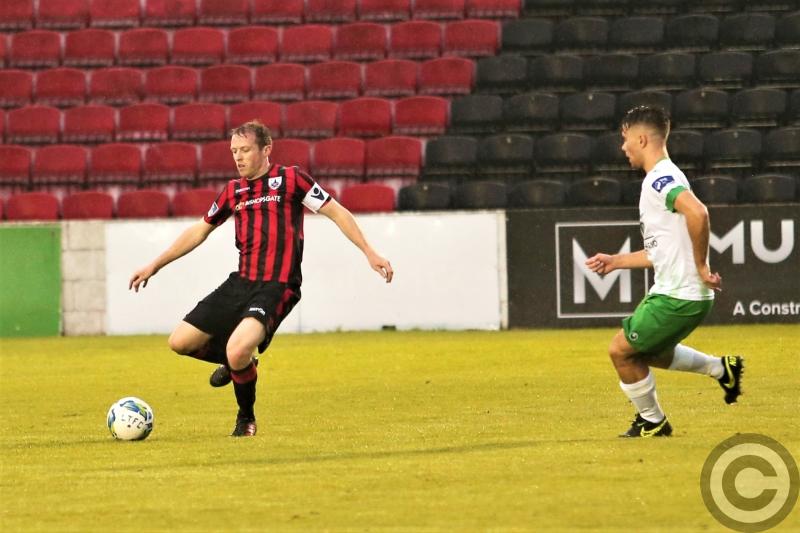 Dean Zambra pictured in action for Longford Town in the recent league clash against Cabinteely at Bishopsgate Picture: Syl Healy

Hurting from the disappointing consecutive defeats against Cabinteely and Cobh Ramblers, Longford Town need a win against Wexford at Bishopsgate this Monday night (kick-off 7.45pm) to get their promotion bid back on track in the very competitive First Division.

This game has been fixed for Monday as this weekend was FAI Cup weekend and Monday and Tuesday are designated as days for league matches.

The Town will have a bit of an advantage over Wexford as they played a second round FAI Cup game against Athlone on Friday night in Athlone and which went to extra-time with Athlone winning 5-3.

Two trips to the midlands over a four  day period will be hard on amateur players, most of whom are working in day jobs, but that is partly down to the coronavirus pandemic which has caused havoc worldwide.

Wexford travelled to Athlone some weeks ago and came away with a 3-1 victory and it is interesting to note that all the Wexford goals came from two former Longford Town players.

Jack Doherty opened the scoring from the penalty spot and another former Town favourite Kaleem Simon scored the other two Wexford goals.

That win was their only success so far this season in the First Division but they have three more points from three draws, one of which was against table toppers Cabinteely which ended 0-0 at Ferrycarrig Park.

Wexford have quite a few exciting players in their squad, ex-Cabinteely and Shels U-19s who are on a learning curve with the south east club.

Keeper Tom Murphy was on Everton’s books for a few seasons and he also had a spell with UCD.

Defender Jay Nwanze was with Hearts in Scotland and with UCD for a period before joining Wexford.

One can expect a tough test from this youthful Wexford squad. No matter who Wexford have in their team or what position they hold in the table they are always a tough nut to crack.

Last season the Town and Wexford clashed three times in the First Division and Longford might count themselves fortunate to win all three league fixtures.

One thing about Wexford since they joined the League of Ireland is their no surrender attitude and by all accounts it is the same this season.

Now we have to take a serious look at the Longford Town team. On Monday week last they played league leaders Cabinteely at Bishopsgate Stadium and crashed to a very disappointing 3-1 defeat.

Supporters who were able to attend the game were very upset over the Town performance and rightly so as the home side were second best throughout the match.

There was some good news for Longford with the introduction of central defender Joe Gorman who came on at half-time for the unfortunate Mick McDonnell who had to be replaced due to injury.

Gorman, back in action after injury, seemed to give the rest of the Town players on the pitch the value of his experience and he also scored the consolation goal in this promotion setback.

Cobh Ramblers added to the current Longford problems with a 2-0 home win at St Colman’s Park on Saturday evening last and the Town cannot afford to lose further ground with their league title hopes fading with the recent poor results.

The fighting spirit that has been so evident over the years was missing against Cabinteely and Cobh and Longford now face the threat of dropping into the bottom half of the First Division table.

Not so long ago the Town had bright hopes of leading the table and the recent slide is clearly a cause for concern.

This Monday’s game against Wexford is massive for the club in the quest to consolidate their place in the promotion play-off positions.

Mick McDonnell and Lido Lotefa join Dean Byrne on the injured list at the moment which is bad news for manager Daire Doyle who is trying to get the team back into the form that had them as one of the favourites for the automatic promotion spot.

On the other hand, a lot of younger players are getting extended runs with the first team and it may stand to the club in the next couple of months.

A win over Wexford is a must this Monday night.