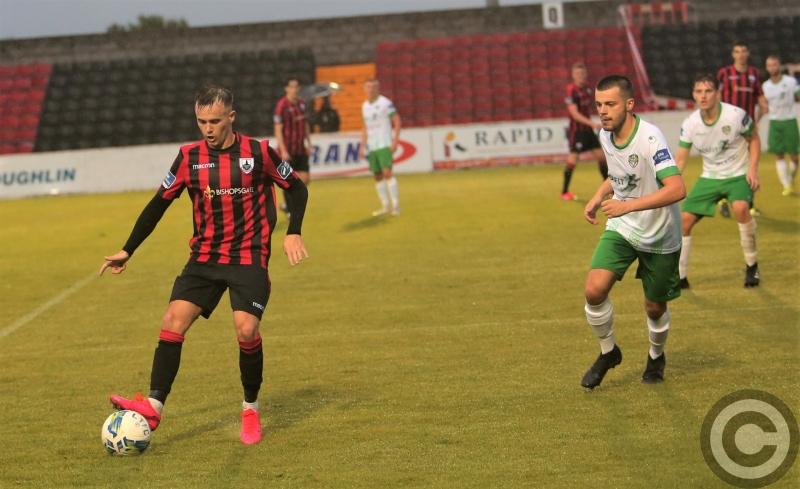 A poor performance from Longford Town saw them crash to a disappointing defeat against the First Division league leaders Cabinteely at Bishopsgate on Monday night.

Despite having early chances the Town were dismal throughout. They lacked hunger and desire and had no fight in them; something some supporters were not happy with.

Longford had an early chance to break the deadlock when a mistake by Cabinteely allowed Aaron McNally through but his weak effort was gathered by opposing keeper Mick Kelly.

On the quarter hour mark Rob Manley cut the ball across in front of the posts but Daniel Blackbyrne got back to clear the danger off the line with Karl Chambers rushing in. Minutes later the home side created another chance; Dylan Grimes low drive was deflected out and from the resulting corner Mick Kelly saved.

Longford were to rue those missed opportunities because in the 19th minute Cabinteely took the lead. Karl Chambers made a costly mistake in chesting the ball down into the path of Shane Barnes and he passed to Zak O’Neill who made no mistake in finding the back of the net.

Barnes had a chance that hit the upright in the 30th minute while the Town came close to levelling matters in the 33rd minute when Mick Kelly saved Mick McDonnell’s header.

Cabinteely broke from that attack and doubled their advantage in the 35th minute; Barnes squared the ball to Kieran Marty Waters and he slotted the ball home.

The Town felt they should have had a free-kick in the 44th minute when Rob Manley was held back but the referee waved play on.

The Town struggled to get back into the game in the second half but were unlucky not to score In the 67th minute. Defender Joe Manley tried his luck from distance but his powerful effort came off the crossbar.

Things got worse for Longford  in the 70th minute when Town keeper Lee Steacy took down Kieran Marty Waters in the box and referee Michael Connolly pointed to the spot with Kevin Knight converting the penalty to put confident Cabinteely in a commanding 3-0 lead.

Longford pulled a goal back five minutes later through substitute Joe Gorman but that was as good as it got and a big improvement will be needed for another tough task away to Cobh Ramblers next Saturday evening.