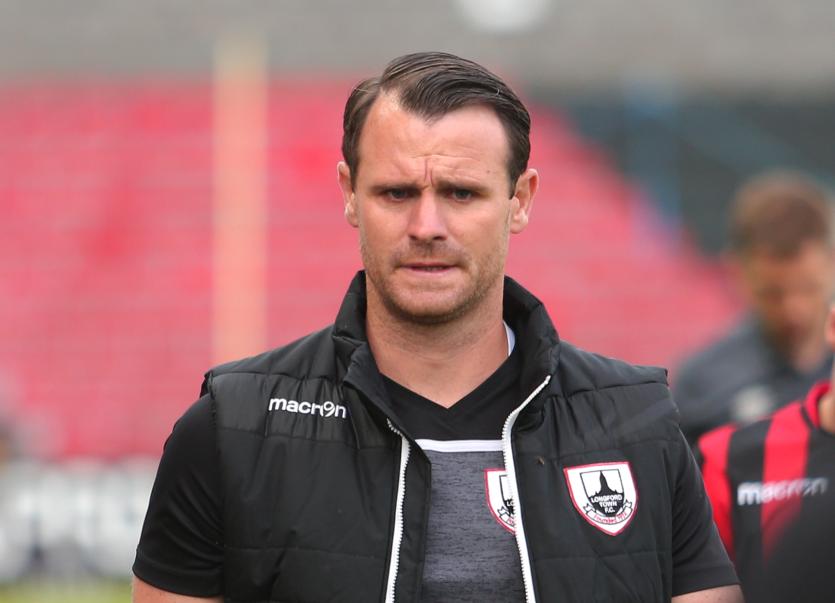 Longford Town manager Daire Doyle, who will be delighted with the great win against Galway United at Eamon Deacy Park on Friday night

Substitute Aaron McCabe scored the crucial only goal with a late strike to clinch a vital victory for Longford Town against Galway United at Eamon Deacy Park on Friday night.

It was a terrific result at such a difficult venue and Town manager Daire Doyle will be obviously delighted with the three points collected in the push for promotion and the First Division league title.

Longford are now second in the table, three points behind the leaders Cabinteely who are the visitors to Bishopsgate on Monday night next for a crunch clash.

McCabe’s goal came in the 82nd minute. Under pressure Galway keeper Kevin Horgan punched the ball clear but it fell to McCabe and he shot to the net. The home side pressed for an equaliser but Town were able to hold on for a very good win.

The Town went close to breaking the deadlock in the 12th minute when Galway keeper Kevin Horgan brought off an excellent to deny Aodh Dervin after he received the ball from Sam Verdon.

The next good chance fell to Galway on 30 minutes but Maurice Nugent’s effort went just inches wide. Minutes later Nugent passed up another opportunity to put Galway ahead.

Both sides had half chances while Sam Verdon hit a volley in first half stoppage time that went so close to going into the net after Rob Manley’s shot was initially blocked.

On 51 minutes Dylan Grimes hit a shot but the Galway netminder Horgan was able to gather the ball. A few minutes later Grimes was the provider for Manley but his effort was blocked down by Galway’s Jack Lynch.

Just past the hour mark Town manager Daire Doyle decided to change things around and made a triple substitution that made an impact as the visitors upped their game and piled on the pressure.

Longford created another chance on 71 minutes with Galway keeper Horgan making a fine save to stop Sam Verdon from scoring.  Down the other end the Town had a lucky escape when Maurice Nugent got on the end of a Shane Duggan corner but the ball went narrowly wide of the post.

The home side created another opportunity on 75 minutes but Lee Steacy made an excellent save with his feet to stop Shane Doherty from putting Galway in front. On 80 minutes Steacy was forced into making a routine save from Conor Barry.

In the six  minutes of stoppage time that was played, Galway tried to engineer an equaliser with Christopher Horgan heading over the bar but the Town defence stood firm to consolidate the crucial win.