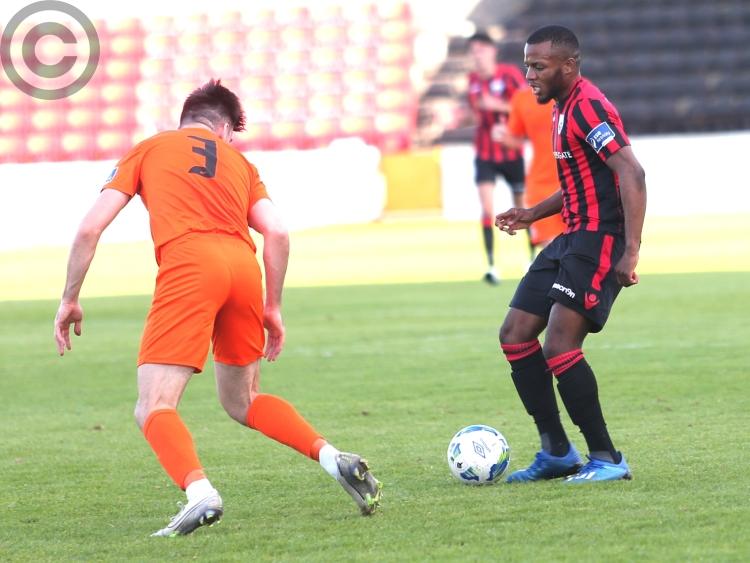 In the aftermath of the so unlucky defeat against Cork City in the FAI Cup first round clash at Turners Cross on Tuesday night that went to extra-time, Longford Town manager Daire Doyle will have the strength of his first team squad tested in the next few days with two tough games in the First Division away to Galway United this Friday night and at home to table toppers Cabinteely on Monday, kick-off 7.45pm.

The Town got back on the winning trail at Bishopsgate Stadium on Saturday night last with a much needed 2-0 win over Athlone in the midlands derby with Sam Verdon scoring both goals for the home side.

The result does not really tell the tale of the game as both teams were guilty of some very poor finishing. One supporter suggested that the scoreline could have been six or seven for the Town while the visitors could have scored at least three goals.

The standard of shooting left a lot to be desired. The highlight was obviously the two goals scored in quick succession by Sam Verdon late in the first half to give the small attendance of Town supporters something to shout about.

Verdon did not start in the disappointing 2-0 defeat at home to Bray on the Bank Holiday Monday but was back in the team to face Athlone. Other changes were made by the Longford manager with Joe Manley coming into the centre of the defence and doing well alongside Mick McDonnell while loanee Lido Lotefa showed some nice touches.

The Town fans were delighted to see the return of Karl Chambers and he was brought on in the closing stages of the game. There was some other good news for the boss Doyle when key defender Joe Gorman was on the bench for the Athlone match.

The injuries are easing and Dean Byrne could also be featuring in some of the upcoming games as he recovers from the serious injury he sustained against Shamrock Rovers II in the opening game of the Covid-19 delayed season back in February.

Getting a result in Galway is always a difficult task and Friday’s game at Eamon Deacy Park is a tricky fixture, to say the least.

Galway have made a poor start to the season and have yet to win a game after drawing four of their five league fixtures played so far. Their manager Alan Murphy is working with a fairly strong and experienced squad and he will be hurting at their lack of success.

Shane Duggan, the former Cork City, Limerick and Waterford midfielder, is a very experienced player who has the ability to control things in the middle of the park while keeper Kevin Horgan is the regular keeper despite the arrival of Matt Connors from Waterford.

The Galway defence is built around the vastly experienced Marc Ludden and Kevin Farragher who have played in the League of Ireland for many seasons.

Former Cobh Ramblers player Stephen Christopher is set to partner the dynamic Duggan in midfield while Vinny Faherty is still one of the best strikers in the league with a lot of goals to his credit in his football career.

Former Finn Harps player Mickey Place is now with Galway and he can make a big impact as he did during his days with the Donegal club.

Longford Town will be very wary going into this vital game against Galway who will be really fired up to get their first win in the First Division this season.