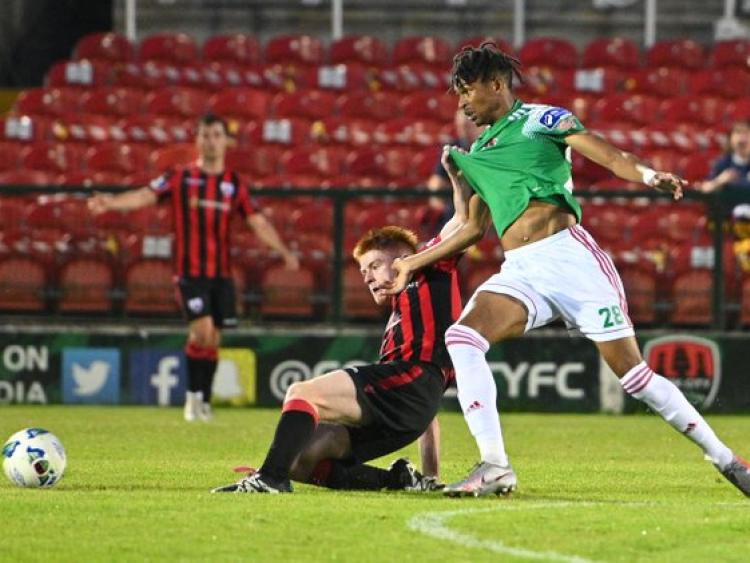 Substitute Ricardo Dinanga scored a last gasp goal for Cork City to knock a most unlucky Longford Town out of the Extra.ie FAI Cup on Tuesday night at Turners Cross.

The game looked to be heading for a penalty shoot-out but Dinanga found the back of the net with a superb finish right at the very end of extra-time for the Premier Division strugglers who are currently stuck at the bottom of the table in the Airtricity League and were there for the taking.

It was very tough on the Town who produced a fine performance but just couldn't score, even with the advantage of the extra man after Cork’s Graham Cummins was sent-off in the 77th minute.

Longford had an early chance with Aodh Dervin firing over the bar after four minutes. They then had a half chance through Aaron McNally while Cork created their first opportunity when Henry Ochieng's low shot from distance went wide after nine minutes.

On 13 minutes the home side had another chance but Cian Bargary had his attempt saved by Town reserve keeper Luke Dennison, replacing the regular netminder Lee Steacy on this occasion.

Both sides pressed to carve out chances to open the scoring. Rob Manley had a great opportunity to break the deadlock for the Town after 34 minutes but City keeper Liam Bossin brought off a good save with his feet.

While Cork forced the Town into the concession of corners, the visitors nearly caught City out on 40 minutes when a back pass went astray and Manley played in Aaron McNally but Bossin was able to clear the ball as the sides went in at the break deadlocked at 0-0.

Cork City had a penalty claim waved away on 48 minutes after substitute Charlie Fleming went down in the box.

Town substitute Aaron McCabe made his presence felt after his introduction but should have done better with his effort on 66 minutes after he was through on goal.

On 75 minutes the lively McCabe forced Bossin into making a fine save as the Town piled on the pressure and soon after Cork were reduced to 10 men when Graham Cummins brought down Callum Warfield and received a red card.

McCabe very nearly gave Longford the lead on 86 minutes but his shot went narrowly wide and thus extra-time was required.

Cork’s Kevin O'Connor volleyed over the bar in the early stages of extra-time while Longford’s McNally was causing havoc but couldn't find the back of the net.

Right at the end former Town player Dylan McGlade shot over the bar but there was still time for some late drama with Cork snatching the winning goal, much to the great relief and obvious delight of their manager Neale Fenn who suddenly left the Longford job well into last season (August) to take charge at Turners Cross.