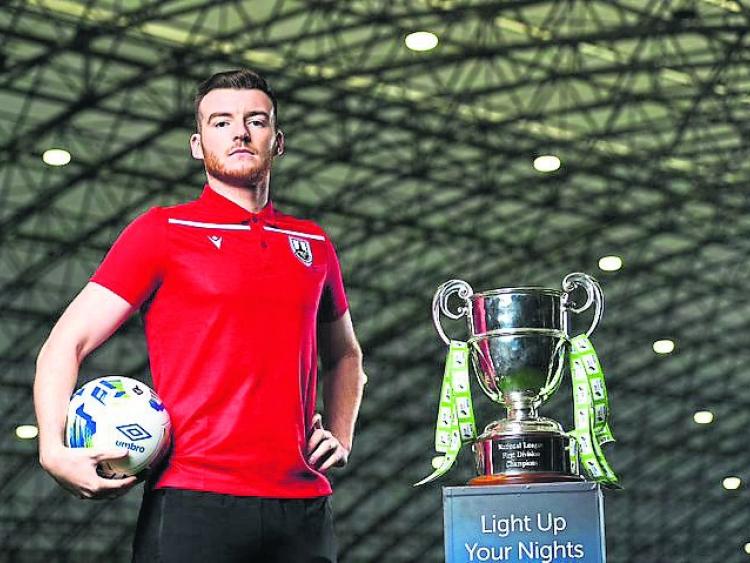 New Longford Town player Joe Gorman pictured at the recent launch of the 2020 Airtricity League at the Aviva Stadium. Gorman was signed from Irish League side Cliftonville

Longford Town supporters will be delighted to see football back in Bishopsgate Stadium after weeks of uncertainty when Shamrock Rovers II are visitors to the Strokestown Road venue this Saturday night, kick-off 7.30pm.

With all the controversy over Limerick and clubs not happy with the inclusion of Shamrock Rovers all was agreed last week and all the First Division clubs could plan for the forthcoming season.

In an ideal world Limerick would have stayed in the league and then there would be no fuss with the inclusion of Shamrock Rovers second string to make it a ten team league.

In the end Limerick didn't apply for a licence and the original fixtures stood and all is ready for the First Division kick-offs on Friday and Saturday next.

One has to compliment our manager Daire Doyle and his squad for their pre season preparations with all the behind the scenes uncertainty due to incompetence in head office but next Saturday night that will all be forgotten.

Longford Town had a very busy pre season playing games against top Premier Division sides and despite using basically two teams in each game Daire Doyle's side had great performances and super results.

Wins over Finn Harps and Premier Division champions Dundalk at Oriel Park were the stand out results but pre season games are for giving the manager a chance to try out players in different positions and using different combinations.

Daire Doyle lost some of his 2019 team at the end of last season with rock solid defender Conor Kenna deciding to retire from League of Ireland football and there is no doubt  that he will be a very hard act to follow but that is football and Longford will have to plan without this super player.

Losing one defender is bad but losing two regulars is even worse as the very impressive Anto Breslin didn't resign for the club and he eventually joined Premier Division Bohemians.

Anto had a great season for the team and his form meant that Tristan Noack Hoffman, a regular at left back for the team the previous season, struggled to get in ahead of Breslin.

Tristan has also departed the club and has signed for Bray Wanderers and everyone at the club wish the Arva lad all the best under former manager Gary Cronin. Striker Aaron Dobbs joined newly promoted Shelbourne and he was on the bench in their great victory over Cork City in Turners Cross on Friday night last.

The  Cork side,  managed by former Town supremo Neale Fenn, also included a former Town player as Dylan McGlade came back from non league Blyth Spartans to join up with his former boss.

This was a great result for Shels young manager Ian Morris who was making his managerial debut in the Premier Division.

Longford Town have made some very shrewd signings during the break and the arrival of Rob Manley from Cabinteely is undoubtedly a major asset.

Last season’s First Division top scorer will undoubtedly be a big boost when it comes to scoring vital goals as he did last season and some were against Longford.

Rob will hopefully crown his home league debut against Shamrock Rovers with a goal. His signing was a real coup for manager Doyle and the arrival of James English is also a definite plus for the Town.

It's no wonder that Shels supporters are dumbfounded that he was allowed to leave the Tolka Park outfit.

The signing of former Cliftonville central defender Joe Gorman is another very shrewd move by Daire Doyle as he searched for a replacement for Conor Kenna and he is a similar type of player.

Joe has lots of experience as he played with Bray and Drogheda in the league here but he also played with Clyde and Inverness Caledonian Thistle in Scotland. Manager Doyle will be hoping that he forges a good partnership with Mick McDonnell who had a great season last year.

Young defender Dylan Hand has joined the club from Premier champions Dundalk having previously been with Chesterfield in the English League.

Another former Dundalk  player Aaron McNally has also joined the club and he has looked very impressive in the pre season games.

Another exciting prospect is Eric Abulu who is a left back and he joined the club from Shamrock Rovers. He played the first half against Dundalk at Oriel Park and he showed that he will be fighting for a place in the starting eleven when the league starts.

Manager Doyle is expecting many of his new signings to shine this season despite most of them being very young. Another new signing Niall Barnes joined the club from Leinster Senior League club Bluebell United having previously played with Leixlip United.

Niall signalled his arrival in the Town colours with an excellent goal against Finn Harps at Bishopsgate Stadium a few weeks ago.

Another new signing who joined the club from Phoenix FC, Matthew O'Brien,  has played in most of the pre season games and he is only 16 years of age and he showed lots of maturity.

Aaron McCabe, who has come through our youths system, also played in most of the pre season games including the match against Dundalk at Oriel Park and there is no doubt that he has lots of ability and is a player for the future and he will be pressing for first team games.

Lee Steacy and Luke Dennison will battle it out for the goalkeepers jersey and it's great for the club to have two outstanding keepers plus under 19s player Uli Keller also in the squad.

With Karl Chambers, Shane Elworthy, Joe Manley and Mick McDonnell along with the new signings, manager Doyle has a great defensive squad to pick from.

Dean Zambra (captain) and Aodh Dervin remain from last season with Aodh showing young local players that it's possible to make it into the senior squad if their attitude is correct.

Adam Evans, Dylan Grimes and Jack Doherty are all experienced players who know the way to win games and they also will give manager Doyle a selection headache when he goes to pick his starting eleven. With Dean Byrne and Sam Verdon both prolific goalscorers also there the Town should be scoring regularly this season.

Supporters should be very excited with the array of talented players that Daire Doyle has assembled and with promotion our main goal we hope that the current squad can push us that extra bit to get back into the Premier Division.

Longford Town manager Daire Doyle has been very busy from the end of last season trying to assemble a title winning squad and he seems confident on making the big move to the Premier Division.

Going into Saturday’s opening game against Shamrock Rovers II, Daire is going into the unknown against an unknown squad that is being managed by a former player Aidan Price.

Price was captain of the Shamrock Rovers team in 2006 that won promotion back to the Premier Division when Rovers were in the First Division. Price was a very good player back then and no doubt he will be passing on his experience from his playing days.

At the time of writing not a lot is known about the Shamrock Rovers II squad as there are ongoing meetings between the league office and the other nine First Division clubs about the composition of their ‘B’ squad.

One player that will be very familiar with the Town supporters is midfielder Sean Brennan who played with the Town last season on a loan deal from Southampton and he is on loan with Shamrock Rovers this year.

The Rovers squad more than likely will be made up of under 17s and under 19s, the rest will have to be agreed between the league and all the teams in the First Division.

The fact that Shamrock Rovers II can't get promoted, can't play in the League Cup or the FAI Cup gives the Rovers second string players not a lot to play for but they are a huge club and many young players would give anything to play for the famous Hoops.

The Rovers club have a massive academy out at Roadstone and they are able to pick up many good young players from around the city and countrywide.

Make no mistake about it the Shamrock Rovers II side that will take the field at Bishopsgate Stadium on Saturday night will be a very good committed squad.