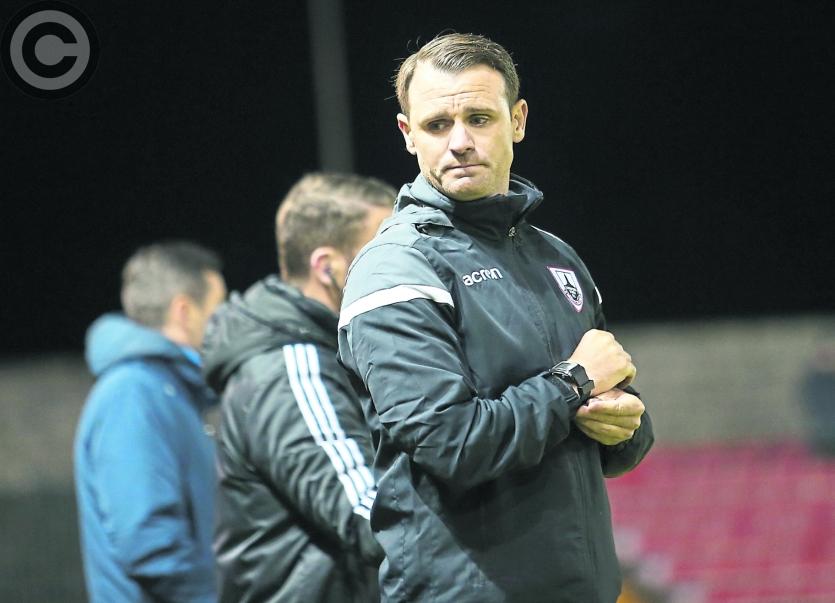 Longford Town interim manager Daire Doyle was so dejected after the agonising defeat against Cabinteely on penalties in the second leg of the promotion play-off at City Calling Stadium on Friday night last.

The game finished 1-1 after extra-time and penalties were required to decide the winner with the Dublin side winning 3-1 on spot-kicks; Cabinteely keeper Stephen McGuinness making three saves.

Doyle said: “The team fought hard and played well; we created chances. It wasn’t to be tonight.

“It went to penalties and it is a lottery. Most of the time there is a keeper that ends up being a hero and unfortunately it was the Cabinteely keeper.

“I wish Cabinteely well going forward. I’m just sick, I wish it was us. I really do. I think we could have gone far but it’s not to be.”

Longford had a great chance cleared off the line in the sixth minute but fell behind in the 18th minute. After they equalised they created chances but just couldn’t put them away.

Doyle said: “We did at times play some great stuff. It was great to watch. I just wish we could’ve converted one or two of the chances, unfortunately we didn’t. We had a shot cleared off the line and then we concede slightly against the run of play.”

The Dubliner was proud of the effort his players put in, especially in both legs of the play-offs. When he took over from Neale Fenn he told them he wanted them to work really hard for each other.

“Something that I asked from them was to work really hard for each other in every single game. That’s the number one thing going out on the pitch; the workrate is up there.

“There are teams who don’t have the ability like us but will work just as hard as us. With the ability and workrate combined we have a very good team. It’s so disappointing that we fell at this hurdle.”

In the first leg Town appeared to score a goal but it wasn’t given. On Friday Cabinteely keeper Stephen McGuinness appeared to fumble the ball over the line from an Aaron Dobbs header. Doyle was disappointed with those decisions but didn’t want to moan about them.

“The one last week. I’m not going to cry about it. It wasn’t counted. There is not much we can do about it.

“We had another one tonight where the keeper fumbled it a little bit, it does appear to go behind him but from where we are at the half-way line it’s difficult to see. It’s tough to take. There is no other way of putting it.

Longford Town FC advertised for the vacant manager’s job recently and Doyle said he applied for the position. He hopes to be with the club next season.

“There is a really good squad of players there and if we can keep the majority of them I’m full of belief that good times will happen for Longford Town. If I’m involved in that, I hope so. Time will tell.”