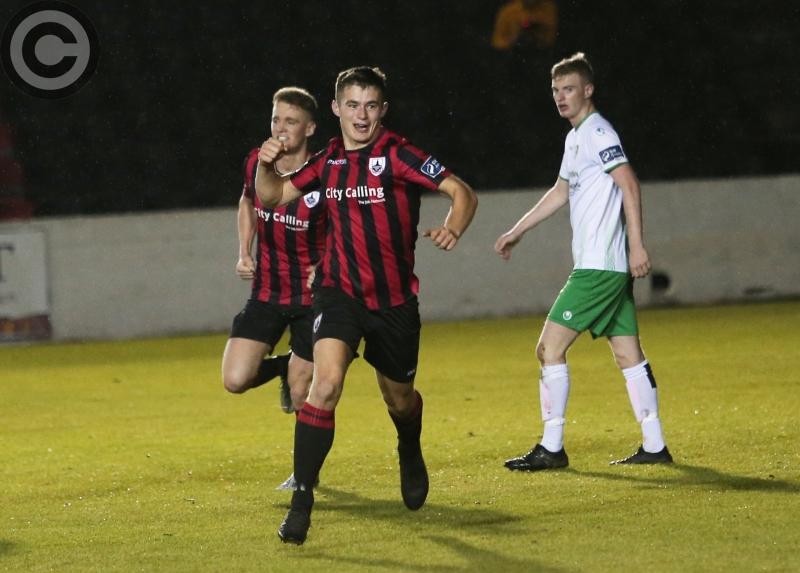 Longford Town striker Aaron Dobbs celebrating after scoring the equaliser against Cabinteely in the closing stages of the first half at City Calling Stadium on Friday night. Picture: Syl Healy

Longford Town’s promotion hopes were dashed in a penalty shoot-out drama at City Calling Stadium on Friday night with Cabinteely booking their place in the second round of the First Division play-offs against Drogheda United.

Much to the sheer dismay of the enthusiastic home supporters who comprised the vast majority of the 1,000 attendance, the Town suffered the heartbreak of a most agonising defeat after showing a lot of character to stay in contention.

Scoreless at Stradbrook in the first leg the previous week, Cabinteely broke the deadlock in the 18th minute when Paul Fox finished the ball to the net after Town keeper Lee Steacy produced a terrific double save to stop shots from Rob Manley and Kieran Marty Waters.

It would probably have been a completely different story had Dylan Grimes not missed a glorious opportunity of giving Longford the lead in the 6th minute when his close range shot was cleared off the line by Cabinteely defender Eoin Massey.

The Town, starting without the injury hit Aodh Dervin, equalised in the 41st minute when Aaron Dobbs scored from a close range header after connecting with a Jack Doherty corner and were looking the likely winners at this stage.

But a second goal failed to materialise with substitute Sam Verdon going close with a long range strike that was well saved by opposing keeper Stephen McGuinness in the 77th minute.

Longford had a very lucky escape in the 73rd minute when Conor Kenna cleared a goalbound shot from Waters off the line and extra-time failed to resolve the issue.

Having said that, Cabinteely had a real scare when a header from Aaron Dobbs was fumbled by McGuinness but he recovered to regain the ball that almost crossed the line in the 112th minute.

Thus the promotion play-off was extended to the dreaded penalty shoot-out with Verdon converting the opening spot kick for Longford and when Conor Keeley had the first Cabinteely penalty saved by Town keeper Lee Steacy the pressure was firmly on the Dublin club.

But Pat Devlin’s side kept their nerve to score three times through Paul Fox, Jack Tuite and Rob Manley to emerge victorious.

Their saviour was outstanding keeper Stephen McGuinness who stopped the other Longford spot kicks taken by Jack Doherty, Aaron Dobbs and Paul O’Conor.