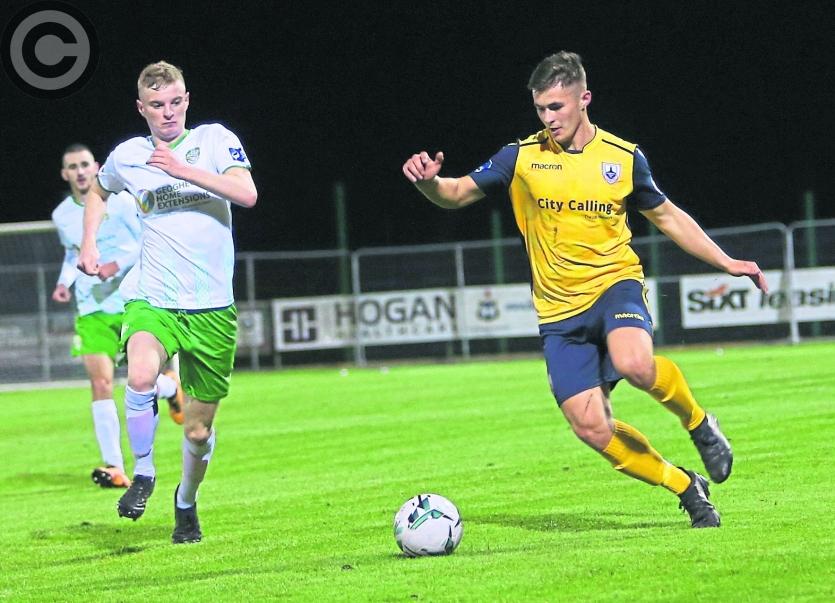 Longford Town play Cabinteely at City Calling Stadium this Friday night (kick-off 7.45pm) in the second leg of the play-offs to decide who will meet Drogheda United in the next round of the promotion round-robin that will eventually decide who plays in the Premier Division next season.

A lot has been said and written about the first leg that took place in Stradbrook on Friday last. Some people will say that it's advantage the Town after a very creditable 0-0 draw up in Dublin but that is far off the mark.

Admittedly the game could have gone either way but the Town dug in and well deserved a draw but this tie is only at the halfway stage and anything can happen in the game at City Calling Stadium on Friday night.

Longford Town are in a much better position than Cabinteely and if they produce the goods in the second leg they can get through to the next round against Drogheda United.

The Cabinteely boss Pat Devlin had his plans for the home game on Friday last and they didn't work for him and no doubt he is gone back to the drawing board to plot our exit out of the promotion play-offs.

Devlin talks a good job and he will play down the fact that they are away but Town interim manager Daire Doyle did a great job of nullifying the Cabinteely goal threat of Manley and Waters on Friday night.

Doyle's preparation for the game were severely hit by the absence of both full backs Shane Elworthy and Anto Breslin through suspension, Dean Byrne through injury and there were also injury doubts about Aodh Dervin and Sean Boyd, both of whom had a place on the bench.

Shane Elworthy was out for an accumulation of yellow cards and will be back for the game on Friday night but Anto Breslin will have to sit out this game as he received a straight red card against Bray from a very poor referee who made a mockery of refereeing.

Leading scorer Dean Byrne was as huge loss to the team as the twelve goal striker is a threat to defences as he is so fast and agile and a nightmare for defenders.

Aodh Dervin replaced Sam Verdon in the 76th minute and made his presence felt for the final quarter of an hour and he should be fully fit to start on Friday night. Sam Verdon, despite starting, is another player with injury problems but he like Aodh should be ok on Friday also.

Sean Boyd is another big threat to opposing defences and he could be pressing for a start on Friday.

With Shane and Anto out Daire Doyle had a bit of a defensive problem but Joe Manley came in to the starting eleven and never put a foot wrong while the inclusion of captain Dean Zambra at left full raised a few eyebrows but the former Bray midfielder never put a foot wrong in the unaccustomed role in the defence. Adam Evans and Paul O'Conor came into the team for the match in Stradbrook.

O'Conor, who has been plagued with injuries this season, showed in his performance against Cabinteely on Friday last  that he is the man for the big games.

The Town's most recent signings Jack Doherty and Dylan Grimes have proved to be two very shrewd signings and they give Daire Doyle great options.

Despite being short three players the Town had a very formidable starting eleven against Cabinteely and Daire Doyle could have a selection problem on Friday next if he has all the players back with the exception of Anto Breslin who will finish his suspension.

In the League proper this season Cabinteely had the indian sign on the Town winning twice and drawing the third game and there is no doubt that Pat Devlin will be very unhappy with the draw on Friday as his side looks for a result at  City Calling Stadium.

Devlin has won in promotion play-off games against the Town in previous years. Next Friday's game more than likely will go down to the wire and we might even have to go to extra-time to get through to the next round and two games against Drogheda United.

A fully fit Aodh Dervin and Dean Byrne will be a huge boost for the Town who need to win this game to make up for the disappointment of not making it to the Premier Division as league champions.

Longford had huge support at the away game last weekend and we need a huge crowd to shout on the Town to a famous victory over the fast improving Cabinteely team in the second leg this Friday night.