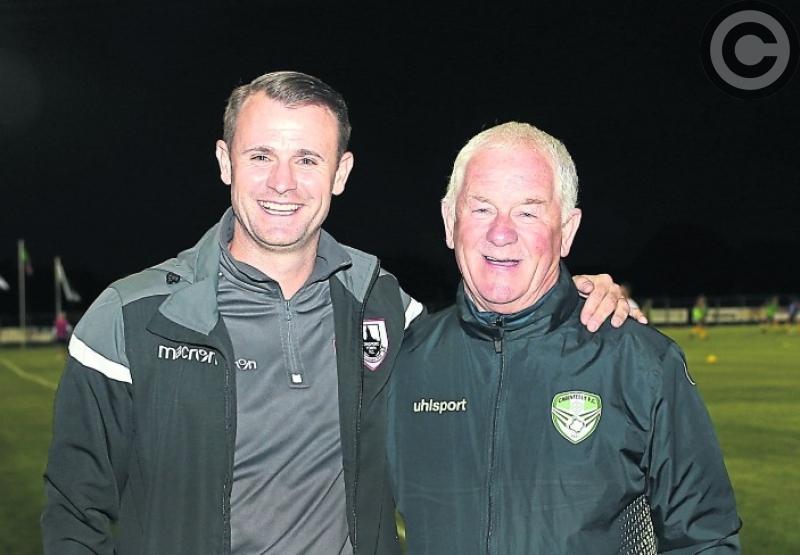 Longford Town interim manager Daire Doyle admitted he was disappointed his side failed to score in the draw against Cabinteely in the first leg of the promotion play-off game on Friday night last.

Doyle couldn’t fault his side’s performance but would’ve liked if they had been rewarded with a goal.

“We came into the dressing room slightly disappointed; not in the performance but in the result. In the first half I felt if we had to have been a bit more ruthless and took our opportunities and got shots on goals rather than square it back or take an extra touch, we could’ve been a couple up.”

The Town boss did speak about the goal that appeared to go in from a corner in the seventh minute.

“Obviously there was the chance from the corner and whether it went over the line, we’ll look at replays and videos and see if it did.

“At the end of the day, no goals, so we may as well forget about it. Possibly it went in from what I’ve been told.”

Despite Longford Town having a lot of possession and creating chances they only forced Cabinteely keeper Stephen McGuinness into making one excellent save.

“We had good passages of play but we didn’t overly test the keeper. We had opportunities where we could have but didn’t. So that is something that we will look to put right in the second leg.”

With both full-backs Shane Elworthy and Anto Breslin suspended for the game the Town had to re-jig the defence with Joe Manley and Dean Zambra coming in.

Doyle said: “You look at Joe and he’s a fantastic young player. Delighted to have him with the group this year. Joe has never let us down when he has come into the team.

“With regards Dean Zambra he is Mr Dependable; you can put Deano in nearly anywhere. He will do a job for the team. I’m happy with the back five tonight.”

Doyle can take plenty of positives out of Longford’s  away performance and he’s hoping his side can be more ruthless in attack at home in the second leg this Friday night, kick-off 7.45pm.

“I’ll go back to us being ruthless in front of goal and taking chances when they do come about. We’ll look to make that right on Friday night.

“We will take the game to them. We’ll be focusing on our game and how we are going to play with and without the ball. It’s going to be about control.”

With good away support in Stradbrook, Doyle wants the Longford Town fans to come out in force on Friday night for the club’s biggest game of the season.

“We are really looking forward to it. There is excitement in the dressing room. Those lads can’t wait to play the game. From a staff point of view we are the same.

“We hope that we can get as many as we can to the second leg  on Friday night. I want people to try and bring their friends, bring their neighbours. It needs to be a big night and with our crowd behind us, supporting us, the fans can be our extra man there to help us along in the promotion battle.”