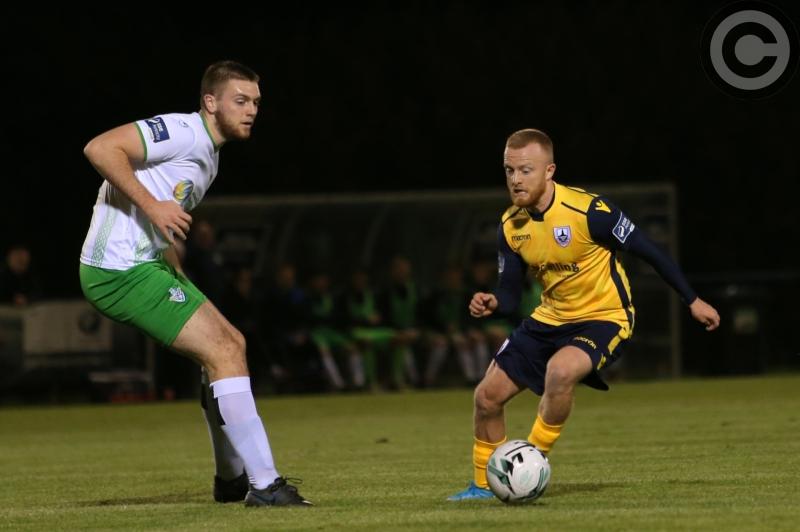 Jack Doherty on the ball for Longford Town against Cabinteely in the first leg of the promotion play-off at Stradbrook on Friday night. Picture: Syl Healy

The First Division third/fourth place promotion play-off is evenly poised after Cabinteely and Longford Town finished scoreless at Stradbrook in the first leg on Friday night.

With so much at stake for both sides it wasn’t a great game of football but there was a goal that appeared to be scored but wasn’t given for the Town.

Cabinteely finished the game with 10 men after Kevin Knight was sent off for a straight red card in the closing stages.

Longford took the game to Cabinteely right from the start. Adam Evans put a perfect ball into the box in the second minute but the home keeper Stephen McGuinness gathered.

The Town thought they had scored in the seventh minute when a Dylan Grimes corner appeared to cross the line; the players reacted but there was no whistle from the referee in a very lucky escape for the Dublin club.

Aodh Dervin was unable to start due to injury and after Cabinteely soaked up the early pressure they created their first chance in the 13th minute but Keith Dalton shot straight at Town keeper Lee Steacy.

Rob Manley was free a few minutes later but Dean Zambra done well to avert the danger while down the other end Aaron Dobbs found himself through but McGuinness brought off a save to deny the Longford striker.

The home side began to come back into the game with Dalton forcing a good save out of Steacy in the 35th minute. They had half chances before the break but failed to trouble the Town netminder.

Steacy thwarted Cabinteely a number of times in the early stages of the second half. Substitute Yuta Sasaki headed over when in a good position in the 67th minute. One minute later Cabinteely had the ball in the net through Rob Manley but it was ruled out for offside.

The deadlock could not be broken and Cabinteely were reduced to 10 men in the 86th minute when Kevin Knight was sent off for a reckless tackle on Town defender Mick McDonnell.

All to play for in the second leg at City Calling Stadium on Friday night next with the eventual winners advancing to meet Drogheda United in the next stage of the promotion play-offs.