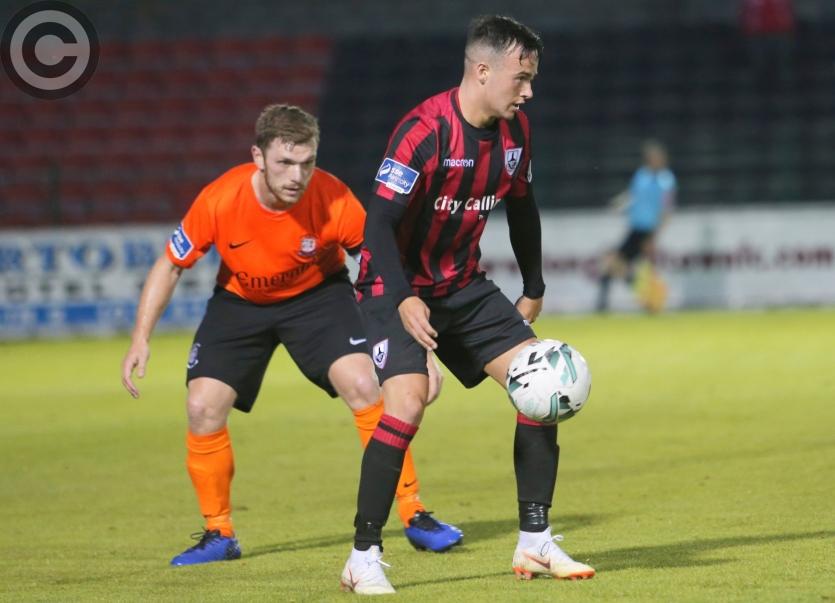 Dylan Grimes on the ball for Longford Town against Athlone. Action from the FAI Cup first round game at City Calling Stadium on Tuesday evening. Picture: Syl Healy

Saturday’s night massive match against league leaders Shelbourne at City Calling Stadium (kick-off 7.30pm) could have a big bearing on who is going to be playing in the Premier Division next season.

Over the last few weekends Shels have started to have a few problems on the pitch as their manager Ian Morris plans for the run in to the First Division campaign.

Shelbourne have suffered a dip in form, losing to Cobh Ramblers in the league and then Bohemians in the FAI Cup last weekend.

Following that emphatic victory the table toppers travelled to St Colman’s Park in a confident mood but Cobh caretaker manager Stuart Ashton had ideas of causing an upset.

Shels manager Ian Morris rested a few players in this game and they crashed to a shock 1-0 defeat. Former Town goalkeeper Paul Hunt was the Cobh hero with an outstanding game for the Cork club.

With the game in the final moments Cobh scored the all important goal and it came from young Matthew Lambe who has graduated to the first team from the club’s U-19 team.

There was no way back for Shels and Longford Town and Drogheda United both won away to close the gap at the top to five points with four fixtures remaining.

Both Longford Town and Drogheda United have to play Shels so the battle for the league title is still alive.

Shels faced a tough game in the FAI Cup on Friday night last when they took on Bohemians at Dalymount Park and manager Morris made some changes from the league defeat against Cobh.

Vastly experienced keeper Dean Delany got a rare start and was outstanding against Bohs.

Morris left top striker Ciaran Kilduff on the bench along with James English, Greg Moorehouse and Aidan Friel but their replacements did very well.

Kilduff was introduced on the hour mark and two minutes later he had the ball in the back of the net to give Shels a deserved lead. Shane Farrell increased the visitors lead in the 82nd minute but former Cobh player Jaze Kabia received a second yellow card immediately and was sent-off.

Three minutes later Bohs were handed a lifeline when Keith Buckley pulled a goal back in the 85th minute and then striker Danny Mandriou scored the equaliser in the 88th minute.

The same player fired home a twenty five yards shot on the stroke of full-time to earn Bohs a very fortunate 3-2 victory.

Shels may be out of the FAI Cup but by all accounts they are concentrating on gaining promotion to the Premier Division.

Recent signing Jack Doherty could be back in contention for a place in the team and the former Wexford player could be a huge asset for the Town in the push for promotion.

Having scored nine goals in the recent league games against Galway and Athlone the goal difference has improved dramatically for Longford.

The Town have played Shels twice this season with the first meeting at City Calling Stadium back at the end of March.

Longford won that game 2-0 with goals from Peter Hopkins in the 20th and the second came from substitute Karl Chambers in the 90th minute.

The second league clash between the clubs was played at Tolka Park at the end of Mayand a goal for Shels from a controversial penalty in the 79th minute settled the issue.

The spot kick was converted by Conan Byrne who had replaced James English 15 minutes earlier. This game was controlled by the Town and they should have scored at least two goals in the first half, such was their dominance.

Dean Byrne posed many problems for Shels and let's hope he does the same thing on Saturday night in what could be described as the biggest match of the season in the First Division.

Shels manager Morris made a few shrewd signings during the July transfer window, bringing in Jaze Kabia and Denzil Fernandes from Cobh Ramblers.

Not only did Morris take two players from Cobh but they also secured the  coaching services of their former manager Stephen Henderson who did a magnificent job when in charge of the Cork club.

The matches between Longford and Shelbourne are always exciting.

Shels should bring a big crowd of supporters to City Calling Stadium and with that in mind we are appealing for a large turn out of Longford Town fans for this crucial clash.

This is Longford’s second last home game in the league this season and the team really need the support in their bid to collect all three vital points.