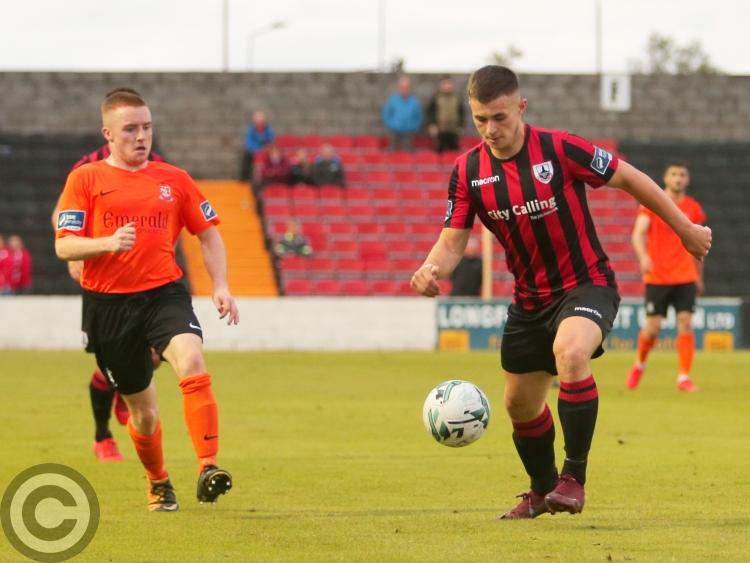 Aaron Dobbs, who scored two of the goals, pictured in action for Longford Town against Athlone in the FAI Cup first round game at City Calling Stadium on Tuesday evening. Photo: Syl Healy

After having to endure a fierce struggle in the first half with Athlone taking a shock lead in the 40th minute, Longford Town eventually got their act together to cross the first hurdle in the FAI Cup.

Making six changes from the team that started in the recent league clash between the clubs, lethargic Longford were lacking cohesion and got a wake up call when Kealan Dillon fired the ball past Lee Steacy approaching the break.

But there was no need for the home supporters in the 295 attendance to get worried about a possible upset as Dylan Grimes set up Aaron Dobbs for the equaliser with less than a minute gone on the changeover.

The unmarked Dobbs directed a close range shot into the back of the net and Longford hit the front in the 71st minute with defender Joe Manley scoring the second goal after connecting with a corner from Adam Evans.

Athlone were almost back on level terms when Longford keeper Steacy made a fine save to keep out a header from Ciaran Grogan in the 77th minute and the home side survived another couple of anxious moments before they snatched a third goal in stoppage time.

Substitute Dean Byrne played the perfect pass into the path of Aaron Dobbs who rounded the Athlone keeper Aaron Myles on his way to scoring for the second time in the match.

While the focus is now firmly fixed on the massive league fixture against the First Division leaders Shelbourne at City Calling Stadium on Saturday next, the Longford players can look forward to a crack at Bohemians at Dalymount Park in the second round of the FAI Cup on August 23.