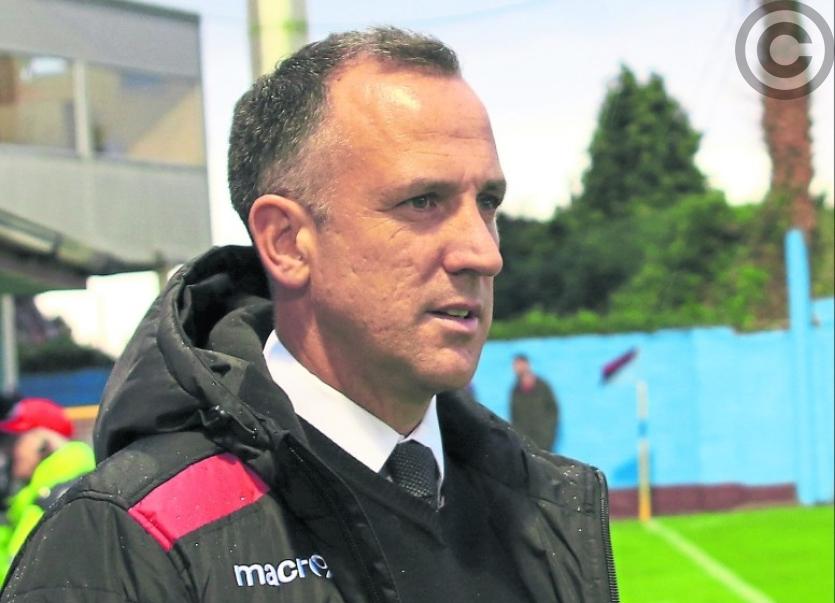 Longford Town manager Neale Fenn with the target of at least a place in the promotion play-offs this season. Photo: Syl Healy

Longford Town manager Neale Fenn gave an honest and fair assessment on his side’s 3-1 defeat away to Limerick on Friday night last. The setback saw Town slip to third in the table and are seven points behind leaders Shelbourne.

Fenn said: “We conceded early again and it kinda killed us a little bit. It’s so difficult once you concede so early. Then we get ourselves back into the game and then concede a goal straight after that.

“You come in at half-time and say “the next goal needs to be ours”; because we weren’t playing too badly and then they score just after half-time. Then it’s an uphill task. It’s not good enough the goals we conceded and some of the play wasn’t sharp enough; it was too slow.”

Longford Town have conceded just 14 goals this season but six of them have come in two of their last three games. The concession of poor goals is something that annoys Fenn. “Champions and teams that get promoted don’t concede goals that are just free headers from corners. It was two against Bray and now one against Limerick.

“The second goal was a great ball in but the lad was unmarked in the box. These are things that are basic stuff. The first two goals were just bad play from us.”

Another problem that has frustrated Fenn is his side’s inability to put away chances that they create. It has cost Town dearly in a number of games.

“Maybe not against Limerick but certainly in other games we have been punished for not taking our chances. Definitely Shels away where we the better team, had better chances and then concede a penalty in the last minute.”

Fenn made two new signings prior to the Limerick game - Jack Doherty and Dylan Grimes. He said he hopes to bring in more players but isn’t too worried if he can’t:

“The two boys are excellent technical players. They will help us moving forward into the last eight games. We are missing a few and don’t want to be holding a massive squad.

“ We don’t want to be bringing in players  just to make up numbers. We will do our best to bring in fresh faces and if that doesn’t happen I’m happy with what we have.”

Fenn said: “Looking at the positive side of it. If we win on Saturday we go second. Shels play Cabinteely which won’t be easy. It’s a game that if we lose then it is squeaky bum time trying to get into the play-offs.”

The Town boss is confident his players can get their season back on track, starting against Drogheda on Saturday.

“We know we can do better. It’s still in our own hands. It’s not all doom and gloom. We believe we can go through the last 8 games unbeaten. We done it for the first 10 fixtures so we are well capable of getting the results we require.”