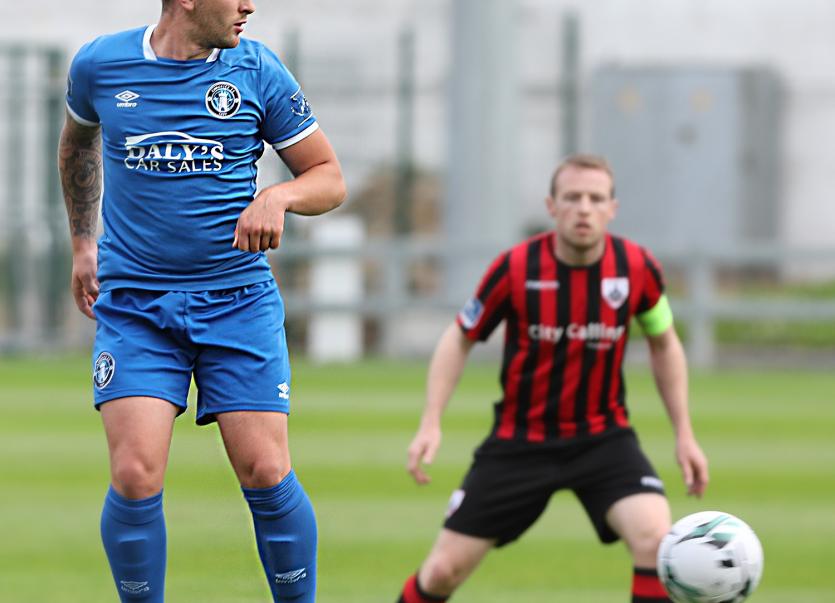 RESILIENT Limerick FC reignited their promotion play-off hopes in the SSE Airtricity League First Division after scoring a terrific 3-1 victory over high-flying Longford Town before just an official attendance of just 380 at the Markets Field on Friday night.

Limerick, who were somewhat unfortunate to lose their unbeaten home league record to leaders Shelbourne a week ago, bounced back in terrific style to stun the visitors who sat in second place in the table before kick-off.

First half goals from Tomas O'Connor, brother of current Bradford City defender Paudie and the excellent Kieran 'Red' Hanlon had Tommy Barrett's charges 2-1 ahead of the 'Town at half-time.

A third Limerick goal, clinically taken by Lee Devitt just five minutes into the second half, sealed a precious victory for the Shannonsiders.

What a pity the attendance at the Markets Field to see this gritty home win wasn't bigger. Tommy Barrett's charges were full value for their sixth home league win of the season.

The result was achieved despite Limerick being dealt a blow prior to kick-off with official confirmation that their exciting young winger William Fitzgerald has left the club to join Premier Division Waterford FC.

Fitzgerald follows striker Connor Ellis in leaving the club in recent weeks and there is continuing speculation that more players will depart the club in the week ahead due to the First Division side's financial issues.

After a loss and draw against Longford in their previous league fixtures this season. manager Barrett will be pleased to pick up a win here ahead of their away date with Bray Wanderers on Friday night next.

In front of a sparse attendance, Limerick FC made a dream start when defender Tomas O'Connor headed the home side into a third minute lead after powering a header into the net off an upright from Shane Tracy's pinpoint corner.

WATCH: So Close! @LimerickFCie defender Shane Tracy is denied scoring a fourth goal for the Blues from a free kick. Home side lead Longford 3-1 after 70 mins at Markets Field #LLSport @Limerick_Leader @LimkLeaderSport pic.twitter.com/5m0Bi46YJc

The small attendance in Garryowen didn't get long to celebrate the lead goal, however, as Longford equalised in the 15th minute. Anto Breslin broke down the left before sending over a delightful cross for Aaaron Dobbs to head home.

However, the see saw nature of the scoring continued just five minutes later when Jason Hughes found Blues right back Shaun Kelly out wide. Kelly crossed for Kieran 'Red' Hanlon to score with a smashing effort and help fire Tommy Barrett's side into a 2-1 lead.

Hanlon's finish was excellent as he steered the ball into the corner, past 'Town keeper Lee Steacy from close range.

A lively Limerick side deservedly maintained their lead at half-time. Barrett's charges who have taken 18 points from a possible 27 at home prior to kick-off were full value for their advantage.

The home side has a great chance to go 3-1 up in the 48th minute when Karl O'Sullivan took advantage of a defensive slip-up. However, O'Sullivan's lob goalwards cleared the advancing Town keeper Steacy, but it also cleared the crossbar.

However, Limerick did deservedly take a two goal advantage just two minutes later when Lee Devitt raced onto a through ball, before coolly finishing past Steacy to double the Blues lead.

The home side survived a real scare just three minutes later, however, as Conor Kenna fired past Jack Brady. However, the effort was ruled out for offside.

Limerick might well have added a fourth goal after 67 minutes, but Shane Tracy's well hit free-kick from out on the right was clawed around the post by Longford 'keeper Lee Steacy.

Longford's final chance of staging a comeback ended when Blues' keeper Jack Brady did superbly to turn Sam Verdon's stinging close range shot around the post for a corner in the 85th minute.