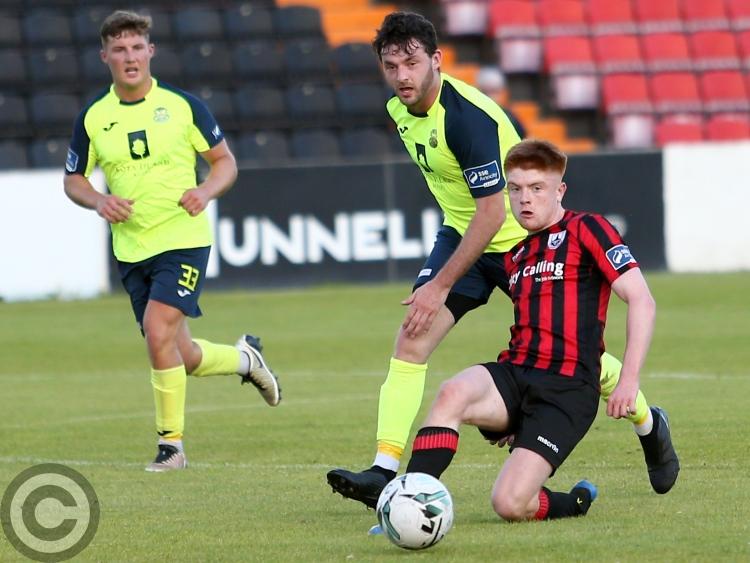 Longford Town start their final round of games this Friday night (kick-off 7.45pm) when they travel to Limerick to play Tommy Barrett’s team who are still in with a chance of making it back to the Premier Division at the end of a turbulent season for the club.

There have been a lot of happenings at the club over the last few seasons and manager Barrett must be complimented on the job he is doing at the famous southern club.

There has been talk of takeovers at the club for the last few seasons but unfortunately nothing has happened for the club in the sports mad city.

Only last week striker Conor Ellis walked out on the club and he is undoubtedly a huge loss to the club with the League moving in to the final round of games.

Barrett has done so well against all the odds and he has to be complimented on his tenure as manager to date.

Despite all the problems and uncertainty at the club Barrett has the team in fifth place in the table on 29 points and that is a point better off than big spending Bray Wanderers who are sixth.

Last Friday night league leaders Shelbourne were visitors to the Markets Field and were one nil victors over a youthful Limerick side.

Ciaran Kilduff was the hero for Shelbourne scoring the only goal of the game in the 38th minute but that was only half the story as Darren Murphy missed a penalty for Limerick in the 20th minute. Who knows what would have happened if Darren had scored but that is football.

Longford Town played managerless Cobh at City Calling Stadium on Saturday night and this was a game that wasn't great for the heart as Cobh battled for the full 90 minutes as is expected from this Cork club. The Town eventually won on that shaky one nil scoreline.

Despite the lack of goals this was a very entertaining game with lots of goalmouth thrills and some outstanding performances from both keepers.

Lee Stacey once again proved why he is rated the best keeper in the Division with a few really top class saves when the game was nil all.

The only goal of the game came from Sam Verdon who blasted the ball to the net past former Town favourite Paul Hunt after a great build up from the Town.

The Town couldn't add to their first half strike but that was down to Hunt who made a few outstanding saves in the second half.

Verdon came very close to his second goal of the game in the second half when he chipped Hunt from the halfway line but the ball drifted past the post to the relief of Hunt.

As in previous games the lack of a goal scoring striker is hampering the Town and there is no doubt that Neale Fenn could do with a striker during the July window.

Over the last few days the Town announced that three players have left the club.

Sean Brennan, who was on loan from Southampton, has returned to the club while Kevin Knight and Jamie Hollywood have also departed from the club.

With just nine games left in the current season the Town need to do a little bit better than performances and results to date with 36 points from 18 games played which is a very good return but Shels at the moment have four extra points from their games played to date.

At this stage we can only worry about our own results and hope that other clubs will take points off the leaders.

The home game against Shels on August 17 could have a big say who is going to top the division at the end of September.

Games between the Town and Limerick have been very close this season with the opening fixture of the season in the Markets Field ending scoreless but it was a very entertaining game.

The second meeting between the clubs at the City Calling Stadium was another close encounter with the Town coming out on top in a one nil result.

The only goal of the game came from the in form Dean Byrne in the 73rd minute. Dean who came off the bench for Adam Evans in the 56th minute scored a superb goal. The Town's in form goalscorer received the ball outside of the box and curled the ball into the top corner of the net past the very impressive Jack Brady in the Limerick goal. That goal eventually won the game but there was lots of excitement in the game from spot kicks to sending offs.

In the 52nd minute Limerick were awarded a penalty for a foul on now departed Conor Ellis but Lee Stacey made a stunning save from the very reliable Shane Tracy from the spot. Around ten minutes later Limerick were reduced to ten men when Sean McSweeney received a straight red for a dangerous tackle on Shane Elworthy.

Limerick fought until the final whistle and they will no doubt pose a big problem for the Town on Friday.

Looking at the Limerick side that started against Shels on Friday last you can see a mixture of experience and youth. Town supporters will no doubt give keeper Jack Brady the usual respect as we can expect for former players. Jack is playing superbly for Limerick keeping out former no 1 Tommy Holland who has to be happy on the bench.

Six of the starting eleven have all come through from the club's underage teams and then they have the experienced players making up the rest of the team.

Shane Tracy is one of the best defenders in the League having played for Galway United and was also cross channel. Robbie Williams the man with the famous name has played both here and in England and he has a calming influence on the younger players in the squad.

Darren Murphy who missed the penalty against Shels last week has played a lot of football in the Premier Division with both Cork and Waterford while Jason Hughes formerly played with Athlone Town and Sligo Rovers.

This game against Limerick will be a tough one and if the Town are to consider themselves to be good enough for automatic promotion they will have to take the three points on offer at the Markets Field.