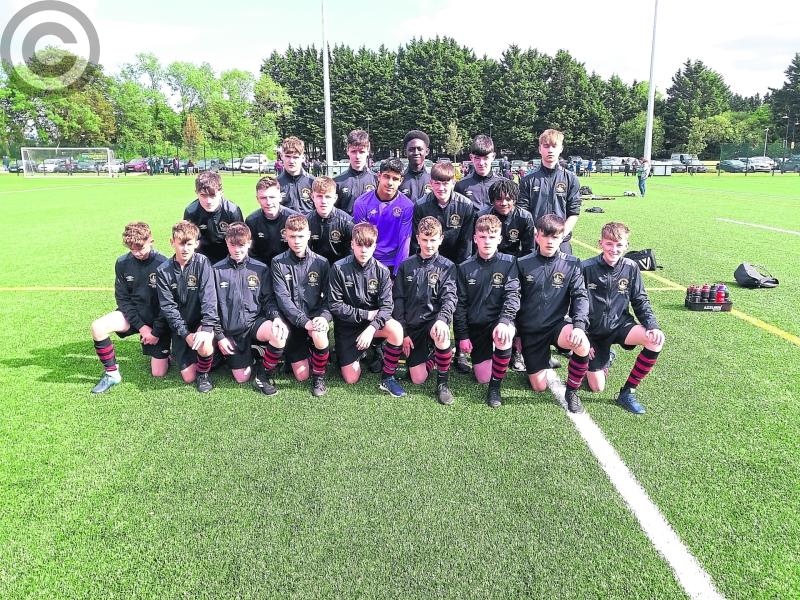 All the training on cold wet winter nights are a thing of the past. It’s the second week of June and for everyone involved in schoolboy football that means it's Kennedy Cup time. 96 games in five days and this for the first time a league from Northern Ireland taking part. Welcome South Belfast.

This year’s Longford & District League U-14 squad is drawn from 6 clubs under the leadership of former Longford Town player Stephen Kelly.

Preparation has gone well win wins over Galway, Limerick County and Athlone among others. This year saw the new astro and grass pitches have been used for the first time so it’s an exciting time to be involved.

The squad are all present well before the departure time and all cut a dash in their new track suits. With their first game at 6pm the boys hit the road and enjoy the journey south. The players are in fine fettle and chat among themselves. We are soon on the outskirts of Limerick and looking for familiar landmarks in making their through the traffic. On entering the University grounds we make out way to the office in Kilmurray. Familiar faces greet us and we are allocated our accommodation which this year also happens to be in Kilmurray.

After checking in and sorting out the houses we decide to check out the new facilities. OMG, what can one say out of this world. Everyone is in agreement this is something else. All the teams are down having a look, player’s chat with players from other Leagues. What a week we have to look forward to.

After lunch it’s back to our houses for a pre match meeting. We are in group 8 with Cork Schoolboy League, Cavan/Monaghan and South Tipperary. First up is Cavan/Monaghan.

Cavan/Monaghan start as favourites because of victories over us last season in Subway competitions. The opening ten minutes see us on the back foot with keeper Kristan Fakova comes to clear a corner, Jack Belton makes a saving tackle. Longford respond with Callum Duignan, Matthew Carey, Rasheed Yeboah and Andrew Flynn get to the pace of the game. Paddy Moran gets on the end of a Carey pass and we are one up. Five minutes later Moran grabbed a second goal.

The Cavan/Monaghan side are in shock but they manage to pull one back before the break. The second half and Longford are playing a nice brand of football with Moran sharp up front, Carey and Flynn working hard and Ross Shields reading the game well at the back. Josh Kelly has a goal disallowed and Flynn smacked an effort of the post after taking a pass from Oliver Manser. All this before Moran got his hat-trick. Cavan/Monaghan got a second but Longford missed a last minute penalty.

Tuesday morning and we face first seeds Cork and this was step up in class but at the end of the game we were the talk of Limerick. Paddy Moran scored both our goals in a 2-1 win. Stephen Kelly had his side set up perfectly for this one. Keeper Fakova made some top class saves. Defenders Duignan, Cormac McGann and Solomon Eduard were excellent. Yeboah, Carey and Flynn were superb. Brilliant win.

Tuesday evening and at this stage people were beginning to take notice. Who is this Paddy Moran? Where did they get Eduard from? How come we never heard of Carey and Flynn? In our third game we played South Tipp.

Jack Sherrin got our first inside five minutes. Michael Flynn, Donal Greene, Elliot Kells and Kyle Birney came in and made telling contributions. South Tipp equalised and as play ebbed and flowed our keeper Eoin Duignan made a couple of good saves while Cormac McGann was a solid defender. Jack Belton restored our advantage when after Oliver Manser’s free-kick was only half cleared the big defender was in the right place to score.

Group winners and a date with Galway in the quarter-final. Again a big crowd in attendance. Moran scores after five minutes. Galway levelled however Andrew Flynn gets the winner.

Longford had to dig deep to get a result again as Fakova made some great saves with excellent work also from Belton, Eduard and Shields. Moran was superb and his pace took him defenders time again.

History was made. Our first ever Kennedy Cup semi-final and here we are against the powerful Dublin opponents DDSL. 30 time winners a look at the programme tells us and clubs like Shamrock Rovers, St Kevin’s Boys, Cherry Orchard and Belvedere have players in the squad.  DDSL strolled through the group and beat North Dublin in the quarter-final.

We are four goals down at the break. Its finishes 5-0 but every player in the squad got a run so every player can say they played in the Kennedy Cup semi-final against the Dublin & District League.

This left us in a play-off for third place against Carlow. We bounce back to win 4-2 with Moran getting two and his second in the last minute was out of this world. Flynn put us in front from a Greene pass. Moran got our second before Carlow made it 2-1. Birney takes advantage of a Harry Mulvihill pass to make it 3-1.  Carlow got their second and then in the last minute Michael Flynn linked up with Harry Kiernan to find Moran with a perfect pass and Moran hit a screamer from the edge of the box to bring down the curtain on our 2019 Kennedy Cup campaign.

What a week. We were the first 4th seed in the group stage to reach a Kennedy Cup semi-final and bounced back from a semi-final defeat to win the third place play-off.

Beating Cork, the second biggest league in the Country. Paddy Moran scored 8 goals in five games (he didn’t play against South Tipp) and the performance of players like Solomon Eduard, Andrew Flynn and Andrew Carey was also top class.

The work rate of Josh Kelly, Callum Duignan, Oliver Manser and Jack Belton was impressive. Ross Shields never put a foot wrong. Both keepers Fakova and Duignan played well. The rest of the squad all played their part when called upon.

In years to come I am sure all involved will look back with pride and remember a crazy and wonderful week in Limerick in June 2019. Thanks for the memories lads.