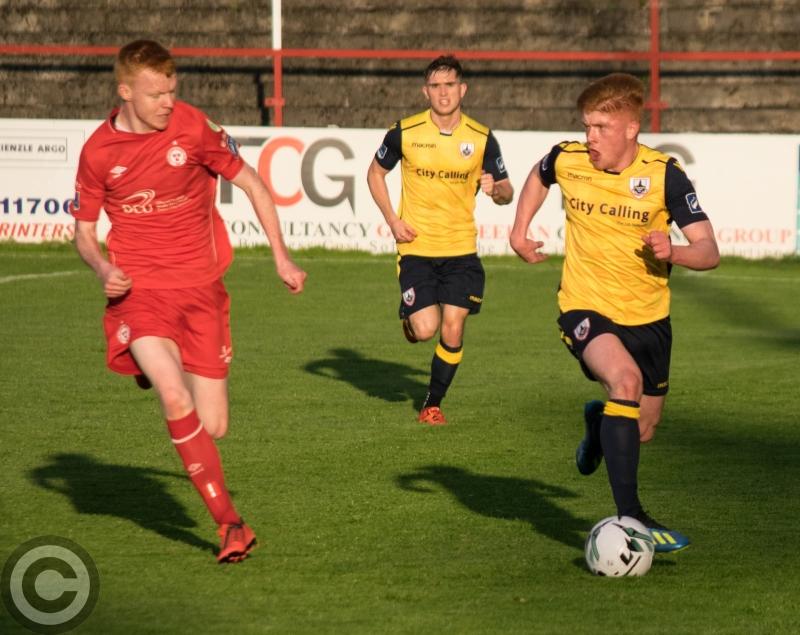 Conan Byrne’s second half goal from a penalty proved to be the difference as First Division leaders Shelbourne defeated Longford Town in the top of the table clash at Tolka Park on Friday night.

The controversial spot-kick materialised in the 79th minute after Peter Hopkins was adjudged to have fouled Lorcan Fitzgerald and the decision by referee Alan Patchell to award the penalty incensed the Town players and management. Shels substitute Conan Byrne took the penalty and sent the Town keeper Lee Steacy the wrong way to settle the issue.

Shels started the game brightly and very nearly opened the scoring in the sixth minute; Dayle Rooney’s cross met the head of Ciaran Kilduff but his effort came back off the post.

Longford's best chance of the first half came in the 27th minute; a corner from Zambra reached Aaron Dobbs but he directed his header just narrowly wide of the post.

The Town created another great scoring opportunity; Dean Byrne broke down the wing and then played the ball into Dobbs who somehow managed to shoot wide from close range.

Longford kept pressing and in the 66th minute they created another opportunity;  Byrne done well to get down the wing before cutting inside and passing to Sam Verdon but his strike was saved by Shels keeper Colin McCabe.

In the 78th minute Lorcan Fitzgerald’s free-kick was deflected out for a corner and from that corner Fitzgerald went down under Peter Hopkins’ challenge. Conan Byrne stepped up and made no mistake from the penalty to win the match for Shelbourne.