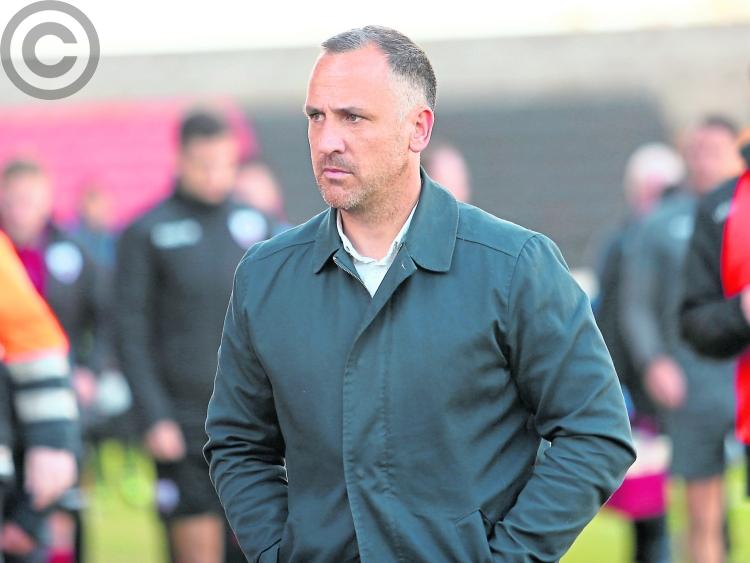 Longford Town FC manager Neale Fenn, who will be demanding a much improved performance from his side in Saturday's midlands derby against Athlone. Picture: Syl Healy

The second midlands derby against Athlone this season is scheduled for City Calling Stadium this Saturday night, kick-off 7.30pm.

This is one of the biggest games of the career of Neale Fenn as manager of Longford Town. There is no doubt that he has done a tremendous job at the club and has made the Town one of the most attractive teams to play in the League for many seasons.

The last few weeks have been a bit frustrating for everyone in the club but these results happen to all teams.

Up to a few weeks ago we were unbeaten in ten games and then came the crash against Cabinteely as Pat Devlin won the battle of the managers.

The Town travelled to Galway on Friday last and basically it was a similar performance to that of the Cabinteely game and we paid for it with our second defeat in succession.

After the game everyone were deflated but then came Saturday night's fixtures and the unbelievable result from Cabinteely game where Pat Devlin's table toppers were hammered 5-0 by Drogheda United.

That result has taken some of the annoyance out of the Galway defeat and it gives everyone a lift for the game against Athlone.

When the teams met in the Athlone Town Stadium back at the end of March, Neale Fenn's side were winners on a 1-0 scoreline. The only goal came in the 69th minute was scored by Sam Verdon.

Last weekend Athlone played Gary Cronin's Bray Wanderers in Athlone and Terry Butler’s side were on the end of a 5-0 hammering.

Bray showed they meant business from the kick off and took the lead after only 7 minutes when Dylan Barnett scored. They doubled their lead on 13 mins when Joe Doyle scored but Athlone lost former Town player Darren Meenan to a straight red card in the 17th minute.

With Bray in great form it was only a matter of time till they extended their lead. Former Town favourite Dylan McGlade missed a penalty in the 28th minute. Almost immediately Sean Heaney scored goal no 3 for Bray. Jake Ellis in the 78th minute and a Derek Daly piledriver in the 85th minute gave the visitors a very emphatic win. There is no doubt that the sending off would have a big bearing on the outcome as Athlone are a much better team than the result would indicate.

When those teams played earlier in the season at the Carlisle Grounds, Athlone won 1-0 with the only goal coming from former Town player Aaron Brilly who incidentally missed last Friday's game due to college exams.

With Darren Meenan missing the game at City Calling Stadium on Saturday through suspension, there is no doubt that Aaron will take his place in midfield.

Despite having conceded 29 goals to date Athlone have a very good keeper in Aaron Myles who had a stint with Nottingham Forest and was also capped for the Republic at under age level.

Former Cabinteely player Dean Casey is one of the team's most experienced defenders as they have quite a few players who have come from under 17s/under 19s teams at Shamrock Rovers and Bohemians.

Former Town favourite Kaleem Simon is one of their most experienced players. Two former Wexford players Shane Dunne and Dean George  could play a big part for Athlone in Saturday night's game.

Kealan Dillon is another former Town player now lining out with Athlone and with plenty of experience. Former West Bromwich Albion player Evan Pierce, who was with the English club for over three years, is another talented youngster who is trying to break into the Athlone first team.

Another former Town player Rhys Gorman was with Athlone earlier in the season but hasn't played for some time.

Last season the teams met three times in the League and we won two and drew the other game. Longford won the first meeting at the City Calling Stadium on a 5-1 scoreline. Unbelievably Athlone took the lead in the first minute when a misplaced clearance by Mick McDonnell fell to big Rory McCullagh and he blasted the ball to the net.

After this early set back the Town were in complete control and they equalised in the 20th minute when striker Chris Mulhall netted. Dean Byrne scored twice before half-time and  Mulhall got his second just before the hour mark and Evan Galvin made it five in the 74th minute.

The second game which was played in Athlone ended 1-1 with former Town player Aaron Brilly giving the home side a surprise lead after 21 mins.

Just before the hour mark the Town equalised and it was Chris Mulhall who put the ball in the Athlone net. Mulhall was sent off by a very incompetent referee who was down from the Irish FA.

The final meeting between the clubs was at City Calling Stadium and the home side won 3-0. The Town's opening goal was an OG from defender Baba Issaka and the Town's second goal came from local player Aodh Dervin and the third goal came in the 54th minute and that was scored by Jamie Hollywood.

Neale Fenn will be hoping that his misfiring team will get back into the form that had them on top of the table and unbeaten in their opening ten games of the season. Fenn should have a full panel to pick from for this vital game against Athlone and it's up to the players to bounce back with a win.

With only seven points between sixth placed Bray Wanderers and top of the table Cabinteely this is turning out to be a very competitive league with six teams still in with a chance of promotion or the play-off spots in the First Division.

The Town need to take the full points against Athlone on Saturday as they travel to Tolka Park on Friday week to play Shelbourne who are currently in second place a point ahead of Longford.