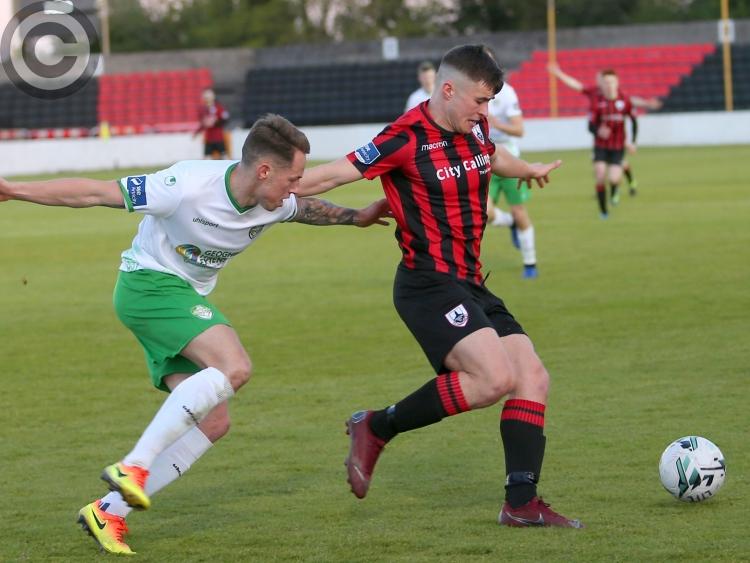 Longford Town lost their unbeaten record last weekend when they were beaten 1-0 by Cabinteely at City Calling Stadium and will bid to get back on track against Galway United at Eamon Deacy Park this Friday night, kick-off 7.45pm.

Before the game Cabinteely's manager Pat Devlin stated that they were coming to Longford to win and the wily old coach was true to his words when he outsmarted the Town's management in this top of the table clash.

Make no mistake about it this wasn't a fluke win as the physically strong Dublin side dominated the game for long periods and deserved their victory.

The win for Cabinteely moves them two points ahead of Longford Town who have a game in hand which is against Galway United which will be played at City Calling Stadium on the June Bank Holiday Monday.

Going back to last Saturday night's game at the City Calling Stadium it looks as if the Town never got out of the starting blocks and the visitors were really competing for every ball and the usual fluent attacking football that the Town are known for just didn't happen on the night.

Before people start thinking that this defeat will have an adverse effect on the team going forward, the squad that Neale Fenn has put together will undoubtedly bounce back from this setback.

The Town will be playing Galway United for the first time this season due to the fact that the home game against Galway fixed for March 16 was postponed due to inclement weather conditions.

Galway, who are now managed by former player Alan Murphy, who has been a great servant for the club for many years.

Murphy has an abundance of experience and he should do a great job for the club who unfortunately are working on a fairly low budget.

With that in mind Murphy will be using quite a few up and coming young players who have come through the ranks of their very good underage structure in the club. The return to the club of the vastly experienced striker Vinny Faherty to the club was a great boost to the new manager.

The former Sligo, Limerick, Dundalk and St Patrick's Athletic player knows how to score goals and Faherty has formed a good partnership with Conor Barry who is also very clinical in front of goal. He has formerly played with Salthill Devon and Athlone Town. Central defender Stephen Walsh will be no stranger to the Town supporters having played here in 2017.

Galway also have a very good midfielder in Conor Melody and another former Mervue player Mark Ludden. An interesting addition to the club this season is that of Iarfhlaith Davoren who has rejoined the club as a player coach. The former Galway player had a stint with the Town back in 2008 and he left us for the short trip to Sligo with whom he won an FAI Cup and League Cup medals.

One very exciting prospect in the Galway squad is defender Christopher Horgan who is one of many brothers who have played in the league, the most famous of them is Daryl who is currently playing in the Scottish Premier Division with Hibernian having previously starred with Dundalk.

Last season the teams met three times in the League and the results favoured the Town who won twice and drew the other game. The first meeting between the clubs last season was played in Eamon Deacy Park and despite being scoreless it was a thrilling encounter. When the teams met at City Calling Stadium in the second meeting the game ended 3-2 to the Town.

The third meeting between the clubs at Eamon Deacy Park was a 4-1 victory for the Town with two goals each from Jamie Doyle and Dylan McGlade.

The current Galway squad are struggling at the wrong end of the table with nine points just one point ahead of bottom club Wexford. The club have three victories to date and seven defeats. They have beaten Wexford home and away and they have also won away to Athlone.

Despite their lowly position Galway will be no pushover and Neale Fenn will want his shot shy strikers to start putting the ball in the net if they are to consider themselves to be worthy challengers for promotion.

As always we expect a large crowd to travel to Galway and we need our fantastic supporters to get behind the team from the kick-off.