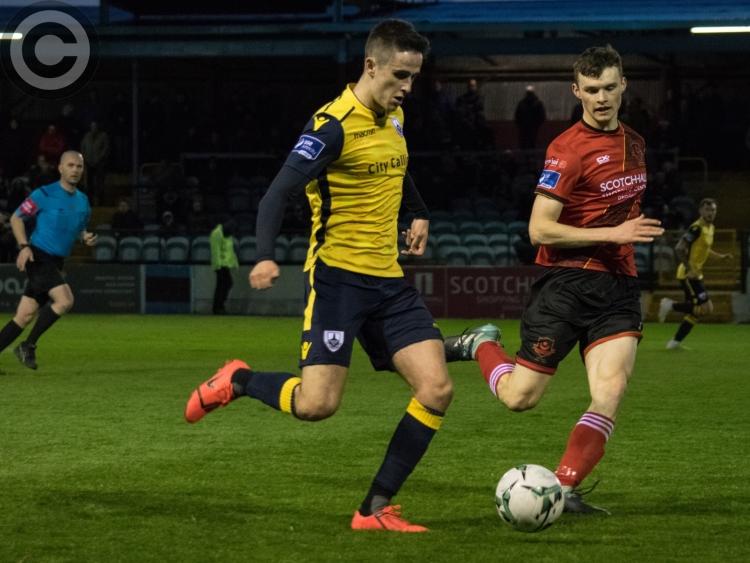 When the league commenced at the end of February there wouldn't be many supporters who would speculate that the game between Longford Town and Cabinteely at City Calling Stadium on Saturday May 11 would be a top of the table clash, kick-off 7.30pm.

Both clubs are flying at the moment. As the table stands Longford Town lead on 24 points, one ahead of Cabinteely and five ahead of Shelbourne in third. Limerick are in fourth on 18 points and they are a point ahead of Drogheda and two ahead of Bray who slumped to their fifth defeat of the season at the Markets Field on Friday.

The Town travelled to Drogheda on Friday last and came away with a one nil victory and yet another clean sheet which brings it to eight clean sheets in the league games played to date.

Aaron Dobbs, who made a welcome comeback after injury from the bench against Limerick the previous week when he replaced Sam Verdon in the 71st minute, started in United Park and he turned out to be the Town's hero when he scored the only goal of the game in the 45th minute.

Former Cabinteely player Kevin Knight made his first appearance since he played against Derry City in the EA Sports Cup at the Brandywell back on the 2nd of April.

On Friday last Cabinteely played third in the table Shelbourne at Stradbrook and they won the game one nil. The very experienced Kieran Marty Waters scored after only two minutes after a shot by Rob Manley was parried and the former Shamrock Rovers/Bray player Waters blasted the ball to the net.

That was a fantastic start for Pat Devlin's team but they had a bit of a shock four minutes later when Shels were awarded a penalty. Midfielder Vilius Labutis was adjudged to have fouled Shels striker James English but Stephen McGuinness made a superb save from Lorcan Fitzgerald’s spot kick.

By all accounts this game could have gone either way but in the end the Cabinteely defence stood firm against the highly rated Shels team.

To date Cabinteely have only lost two games and both were at home. In the opening game of the season Cabinteely played Bray at Stradbrook and the visitors won 3-0 with two goals from former Town player Dylan McGlade and the other one from O'Halloran.

The second defeat was a home against Limerick at the end of March , losing 2-1.

Cabinteely will pose lots of problems for the Town on Saturday night but this talented Longford team are grinding out results and also are capable of keeping clean sheets such is the form of keeper Lee Steacy and the new look defence which has been improved so much with the arrival of the experienced Conor Kenna and the youthful Anto Breslin.

The emergence of Aodh Dervin as a midfield dynamo alongside the experienced Dean Zambra who has had a new lease of life.

The first meeting between the clubs at Stradbrook ended one all with the Town taking the lead in the 13th minute while the home side got the equaliser from in form striker Rob Manley who is the top goalscorer in the league at this stage.

The Town have only conceded twice in ten league games which is a fantastic achievement for the team and the management. Last season the Town played Cabinteely three times and we just shaded the results winning two and losing one. The Town won the opening game at the CCS on a 3-0 scoreline. The Town's opening goal was an OG from Kieran Butler in the 9th minute. The other two goals came from subs Peter Hopkins and Dean Byrne who scored in the final minutes of the game.

The away game in Stradbrook ended one nil in favour of the home side and the only goal of the game came from Kevin Knight who could be in the Town starting eleven on Saturday next.

The third meeting between the clubs ended 4-1 in favour of the Town who opened the scoring in the 33rd minute with an excellent strike from Karl Chambers. Just before half-time the Town extended their lead and it came from the prolific Dylan McGlade.

Despite being completely on top the Town let the visitors back in the game when Keith Dalton scored. This goal spurred the Town on and two more goals from McGlade gave the Town an emphatic victory.

This Cabinteely team aren't second in the table by chance as they have a very good young team and very experienced management. Keeper Stephen McGuinness is one of the top netminders in the league and he has lots of Premier Division experience with Bray and Shelbourne.

Conor Keely is a no nonsense defender and he has good lads alongside him in the defence. Keith Dalton and Vilius Labutis are top midfielders and then they have the experienced Kieran Marty Waters.

There is no doubt that the Cabinteely dangerman is Rob Manley who only joined Cabinteely this year and he is taking the First Division by storm and he will need to be closely watched.His brother Joe was on the bench for the Town on Friday night last in Drogheda.

There is no doubt that Saturday night's game will be a big test for the Town but with a full squad to pick from Neale Fenn’s side should be able to extend their unbeaten run  and hopefully collect all three points.