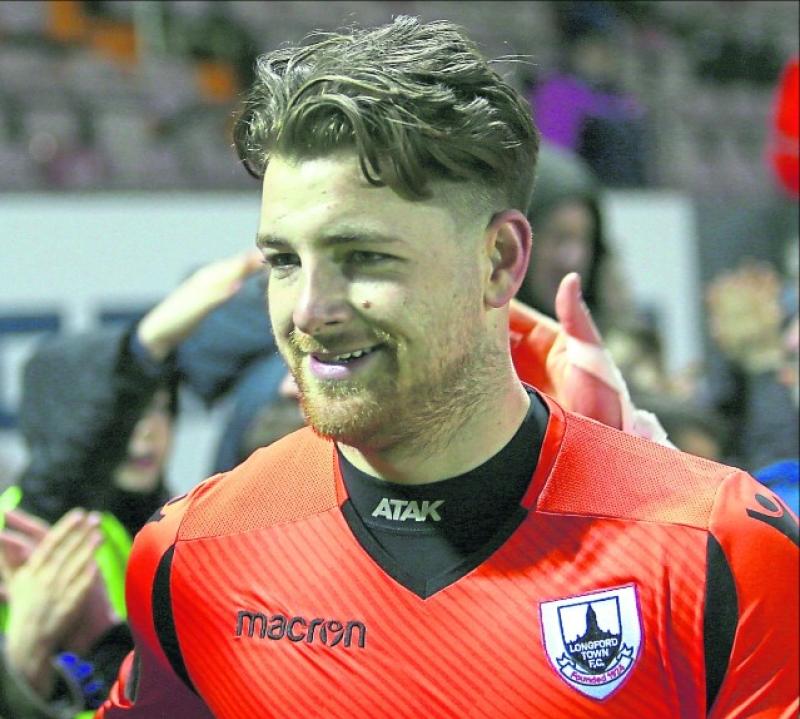 Longford Town keeper Lee Steacy who produced a few fine saves in the great win over Drogheda at United Park.

Aaron Dobbs scored the only goal just before half-time as Longford Town beat Drogheda at United Park on Friday night in extending their excellent unbeaten run in the league to 10 games to consolidate their place at the top of the First Division table.

Drogheda tried hard in the second half to get something out of the game but outstanding Town keeper Lee Steacy kept his net intact in making a number of fine saves.

The home side started brightly and had the ball in the back of the net in the second minute but the shot from Chris Lyons was ruled out for offside. In the 11th minute Luke Heeney had a chance but he shot straight at Town keeper Steacy.

Longford gradually began to get into the game and create chances with Aaron Dobbs shooting just wide in the 20th minute. Five minutes later an excellent strike by Dobbs was saved in fine fashion by Drogheda keeper Luca Gratzer.

Despite Drogheda having possession they failed to really test Steacy. As half-time approached the Town broke the deadlock in the 45th minute when Dobbs found the back of the net with a fine strike from a tight angle.

Drogheda came very near to equalising  in the 59th minute when a cross from Luke McNally met the head of Mark Doyle but he somehow headed wide from close range.

They began to pile on the pressure but the resolute Town defence stood firm with Drogheda guilty of some poor shooting.

In the 75th minute substitute Karl Chambers had a chance to score a second goal for Longford but blasted the ball over the bar from straight in front of the posts.

In the 81st minute Drogheda were awarded a free-kick just on the edge of the box which was taken by Sean Brennan but Steacy dived to his left to make a great save.

As the clock ticked down Drogheda kept pressing for a goal to snatch a draw but they couldn’t find a way past Lee Steacy as he kept his eighth clean sheet of the season.