Difficult task for unbeaten Longford Town away to Drogheda 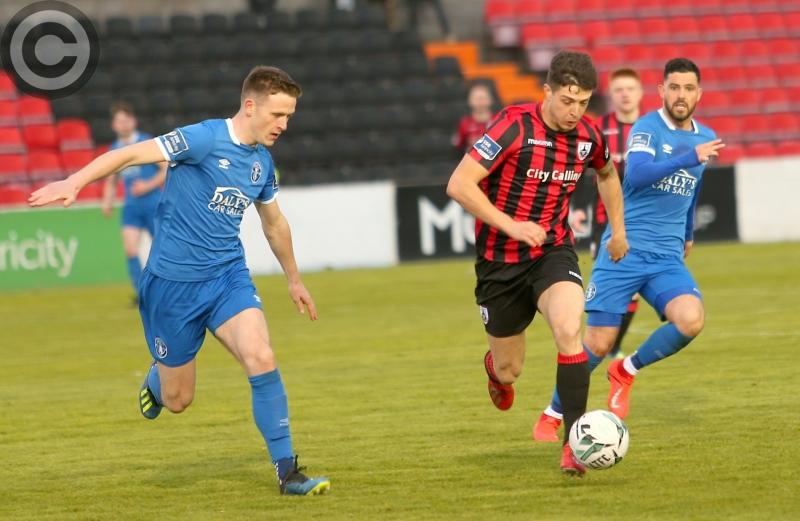 Longford Town travel to United Park to play Drogheda this Friday night for what is going to be a difficult task against Tim Clancy's side, kick-off 7.45pm.

Longford Town lead the First Division table on 21 points with this season's surprise team Cabinteely just a point behind.

After ten games played the fact that six teams are all in the running for top spot and promotion to the Premier Division shows just how competitive the league is.  Thankfully the Town are back in pole position after last weekend's hard earned 1-0 victory over a very gallant Limerick side under their excellent manager Tommy Barrett.

In the last few weeks there have been rumblings coming out of Limerick regarding non payment of wages but anyone present at City Calling Stadium wouldn't think there  were any problems on the pitch as they were a very well organised and a hard working team. Last Saturday night’s victory was one of the toughest games that Neale Fenn's team have encountered since the season started.

The only goal of the game came in the 73rd minute and it was a superb effort from substitute Dean Byrne who played a one two before unleashing an unstoppable shot to the top corner of  the Limerick net.

This goal was worth the entrance fee on the night and we expect spectacular goals from a player that missed a lot of last season through injury.

The game on Saturday had everything, a sending off, a super goal and a penalty save from Lee Steacy who is having a fantastic season in goal for the Town since replacing Mick Kelly, who was the club's number one keeper last season.

This Friday night's game in United Park will be a tough test against Drogheda side who are only four points behind the Town.

Drogheda are the top scorers in the League at the moment with 18 goals scored in their 10 appearances Mark Doyle, who has come through the club under age system, has helped himself to eight goals to date after finishing last season with nine goals. His strike partner Stephen Meaney has  scored four goals to date.

In their recent 5-3 victory over Athlone Meaney scored a hat-trick with Doyle getting the other two goals. Meaney's other goal came in last Saturday night's 4-1 victory in Cobh.

Drogheda may be the League's top scorers but they have the worst defensive record of the top six teams in the league with 15 conceded to date.

Former Town player Chris Bennion is the club's number one keeper but he has missed some games recently due to injury but they have an adequate replacement in former Shamrock Rovers under 19 player Luca Gratzer who by all accounts has a bright future.

Like the Town the Drogheda defence is an automatic back four of Brown, Gallagher, Conor Kane and McNally all of whom are good defenders.

Former Town, Athlone Town and Shelbourne player Mark Hughes is a very good midfielder while Jake Hyland, who missed some of the season through injury, is a talented player who previously played with Bohemians.

Cian Kavanagh, who previously played with Shelbourne, UCD and Shamrock Rovers, gives Drogheda lots of experience in midfield while they also had the vastly experienced Sean Brennan and Kevin Farragher on the bench in Cobh.

When the teams met at City Calling Stadium back in March the Town won the game 3-0 with goals from Dean Byrne, Aaron Dobbs and substitute Peter Hopkins who scored in the final minute of the game. Last season the teams met on three occasions and it was honours even with one win each and a draw.

The opening game in United Park ended one all with the Town goal coming from Dean Byrne – a cracker that was voted goal of the season.

The next game was in  City Calling Stadium and a Sam Verdon effort was enough to clinch all three points.

The final game was played at United Park with the home side winning 2-1. Dean Dillon gave the Town the lead in the 14th minute but Drogheda equalised in the 36th minute with an excellent free kick from Garrett McCaffrey.

The  winning goal was a very controversial one and it was scored by McCaffrey who appeared to be well offside.

The Town have the best defensive record in the whole league with only two goals conceded in nine games and having seven clean sheets. This is a tribute to the new look Town defence and keeper Lee Steacy who has become one of the top keepers in the League.

The arrival of other new signings Conor Kenna and Anto Breslin to the club this season has turned the defence into a very tight outfit along with Shane Elworthy and Mick McDonnell.

The Town team that started against Limerick on Saturday last showed two changes from the previous match in Cobh. Former Dundalk and Galway player Carlton Ubaezuonu started on Saturday in place of the injured Peter Hopkins and the winger showed that he is another fine prospect.

Sam Verdon, who missed the Cobh game through injury, returned to the starting eleven.  Aaron Dobbs was also back after injury as was fellow striker Jamie Doyle who was also on the bench.

Neale Fenn has a near full strength squad to pick from for the visit to United Park and will be hoping that Longford can extend the unbeaten run to ten games.