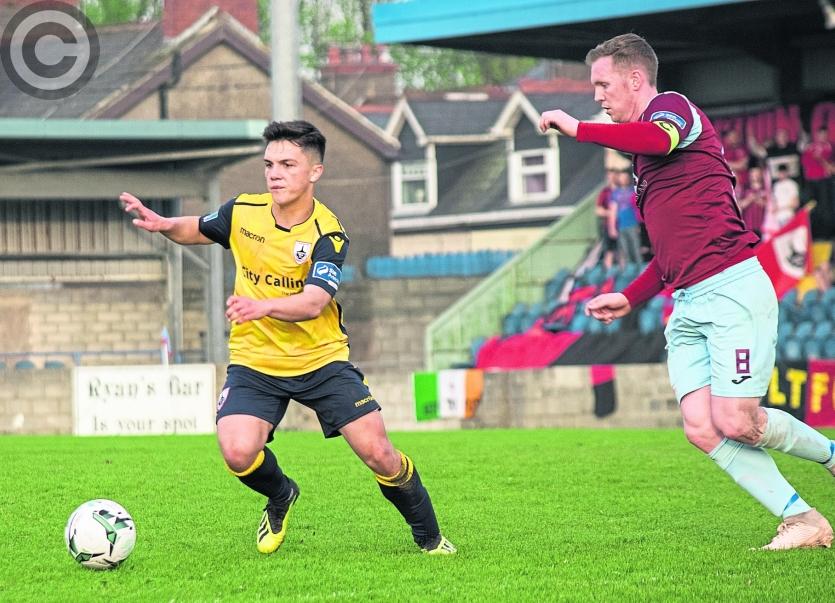 Unbeaten Longford Town, who are now in second place in the First Division table a point behind Cabinteely, will be looking for another win at home against Limerick on Saturday evening, kick-off 7.30pm.

This is a tough game against Tommy Barrett’s solid side but the Town have yet to drop a point at City Calling Stadium this season and hopefully the good run of results will continue on this occasion in front of the expected big attendance.

Limerick were relegated from the Premier Division last season after going through two managers. Pat O’Sullivan had personally financed his local team for many seasons but in recent times he had to rely on others to finance the team.

Going down last season meant that quite a few of their top earners left for other clubs as what happens in the leagues all over the world.

Limerick may be down in the dreaded First Division but they are still capable of competing at the top of the table and are currently in fifth place, four points behind the surprise league leaders Cabinteely.

On Friday night last Limerick travelled to Tolka Park to take on the title favourites Shelbourne and lost 2-0 against the highly rated opposition under new manager Ian Morris.

Karl Moore in the 39th minute and a Lorcan Fitzgerald penalty in the 44th minute got the goals for Shelbourne and while Limerick produced a much improved second half performance they are unable to get back into the game.

Limerick’s other defeat to date was away to Bray Wanderers in the second game of the season when goals from Doyle and Keegan clinched the home win.

One of the stars for Limerick this season is their keeper Jack Brady who left the Town last season as the Munster club needed cover for their No 1 keeper Tommy Holland.

Jack has come into the team from the start of the season and his performances have been outstanding.

When the teams clashed at the Markets Field in the opening game of the season back at the end of February it ended scoreless and nine of the Limerick team that started then were in action against Shelbourne last weekend.

Apart from Longford who have only conceded two goals to date, Limerick have the next best defensive record (seven goals against) which is a tribute to their competent keeper and the generally tight defence.

Shaun Kelly, Shane Treacy and Robbie Williams all have many years of Premier Division experience while the other regular member of the back four, Killian Brouder, is a very exciting young player who came through from underage football.

Up front Limerick have former Cork City striker Conor Ellis who has scored many goals in his football career. Jason Hughes, Sean McSweeney, Darren Murphy and Colm Walsh O’Loghlen are all promising young players who have stepped up from youth football.

Former Town player Sean Russell is another experienced player in the Limerick squad and he has played with quite a few Premier Division sides. Russell, who missed the defeat against Shels on Friday night, is capable of posing a threat and will need to be closely watched.

Make no mistake about it, Limerick will come to City Calling Stadium in a confident frame of mind and their league position shows that they are a useful side.

Longford Town may have lost their spot at the top of the table after last Saturday’s 0-0 draw against Cobh Ramblers at St Colman’s Park but they kept another cleansheet (now six in total) and well done to the defence and keeper Lee Steacy for producing consistently impressive displays.

New signings Conor Kenna and Anto Breslin have strengthened the back four and this has made the Town very difficult to beat, clearly reflected in the position on the league table.

Minus injured duo Aaron Dobbs and Sam Verdon for the tricky task against Cobh meant that the Town were denied a scoring threat but the squad is strong and Dean Byrne was back in the team.

On the plus side for manager Neale Fenn was the return to fitness of former Dundalk and Galway United winger Carlton Ubaezuonu who was in the squad for the first time this season after recovering from injury.

The lively Ubaezuonu was brought on in the 67th minute and almost proved to be Longford’s hero on his debut for the club. Carlton was unlucky not to score a late winner in the eventual 0-0 draw and he was a big threat for the under pressure Cobh defence.

The first phase of league fixtures are now completed, with the notable exception of Longford’s game in hand at home to Galway, so things are going really well for Neale Fenn’s talented team.

Three more points against Limerick at City Calling Stadium on Saturday evening will be a big boost in the push for promotion and hopefully another home win will materialise.