Longford Town away to Cabinteely in very intriguing contest 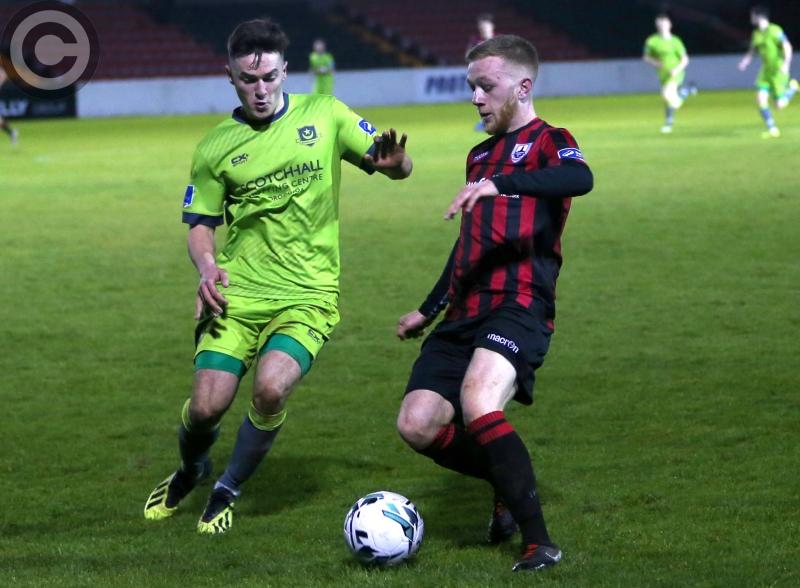 Longford Town head to Stradbrook this Friday night to play Cabinteely in the First Division and a very intriguing contest is in prospect. Kick-off 7.45pm.

Cabinteely, who scored a great win over the title favourites Shelbourne last weekend, are a progressive club that has many underage teams who are producing players for the senior team.

The team that started last Friday's game against Shelbourne included five players who came through the club's impressive underage structures.

The club are doing everything right with this fantastic underage system set up to eventually put out a senior team that includes mostly self produced players.

In their opening game of this year's league campaign Cabinteely were at home to Bray Wanderers who are being managed by former Town player and coach Gary Cronin who led a squad that included three former Town players.

Last year's leading scorer Dylan McGlade started against Cabinteely as did Philip Gannon and they also had Richie Purdy on the bench.

Bray won the game 3-0 with the goals coming from Dylan McGlade (2) and Dean O'Halloran. Bray took the lead from the penalty spot in the 64th minute and two minutes later they added no 2 from Dean O'Halloran. McGlade, who was the Town's top marksman last season, finished the scoring with Bray's third goal in the final minutes of the game.

This was an emphatic victory for Bray and rookie boss Gary Cronin but a big disappointment for the Cabinteely board.

At the beginning of the season Shelbourne were installed as the odds on favourites to return to the Premier Division.

Shels opened their 2019 season with a trip to Eamonn Deacy Park to play Alan Murphy's Galway United. Galway unbelievably went into a two goal lead in 16 minutes with goals from Kelly and Faherty.

With 16 minutes remaining in the game, Galway were still two up but up stepped former Dundalk striker Ciaran Kilduff who scored two goals in the 74th and 83rd minutes and substitute Karl Moore added the third goal to give the favourites a fortunate win.

Big spending Shelbourne got their season off to a great start and were at home to Pat Devlin's Cabinteely at Tolka Park on Friday night last.

Most punters would go for a home win in this game and it looked a certain win when they went into the lead after only 7 minutes when former Bohemians player Oscar Brennan put them in front.

After the early setback Cabinteely got back into the game and they equalised just on the stroke of half-time and it was from the penalty spot which was converted by centre half Conor Keeley.

This was an awful shock to Shelbourne and their new manager Ian Morris but Shels got a lifeline in the 75th minute when goal machine Kilduff scored their second to ensure a grandstand finish.

Cabinteely held out for the final 15 minutes to score a sensational victory over the promotion favourites.

The Cabinteely team that played Shels had quite a few young players in their starting eleven who had come through the youth ranks but they also had a few very experienced men in the team.

Keeper Stephen McGuinness, who previously played with Drogheda and Bray, is a top class keeper while former Shelbourne player Conor Keeley is a very good defender.

Their hard working midfield has three or four former underage players playing but they are so lucky to have the experienced Kieran Marty Waters playing alongside them.

Waters, who played with Bray, Shamrock Rovers and UCD, is a fantastic player who can dictate games if he is given any room. Up front Cabinteely have another super player in Rob Manley who scored an excellent goal against Shels on Friday.

Striker Manley is a serious threat if he is given a decent chance to score and he will need to be tightly marked on Friday if the Town are to continue their good start to the season.

Cabinteely may be the league's newest club but they are becoming hard to beat and that is down to the strong management team.

The team management is under the experienced Pat Devlin, who at 65 is the oldest and possibly shrewdest manager in the League.

Last season the teams met on three occasions in the League and the Town shaded the results. The Town won their two home games while they lost the away game on a 1-0 scoreline. The scorer of the winning goal was Kevin Knight who is now a Town player but he hasn't been involved to date due to injury.

The first meeting between the clubs in early April at City Calling Stadium ended 3-0 to the Town who opened the scoring in the 9th minute and it came from a Kieran Butler OG.

Two Town subs Peter Hopkins and Dean Byrne completed the scoring very late in the game in the 88th and 92nd minute and both players were on the scoresheet on Saturday night last against Drogheda.

The final meeting of the 2018 season was played at City Calling Stadium on Saturday 1st September and the Town won this game 4-1 with Dylan McGlade the outstanding player on the pitch.

The Town took the lead in the 33rd minute with an excellent strike from Karl Chambers. The second goal came on the stroke of half-time when Peter Hopkins set up McGlade for his first goal which he scored from a very tight angle. Cabinteely keeper McGuinness was outstanding in this game as he thwarted many Town scoring chances.

Despite being totally dominant the Town conceded a goal from the impressive Keith Dalton who scored in the 70th minute.

The final twenty minutes was all about the Town and the Dylan McGlade super show as he helped himself to two more goals to complete his hat-trick.

The current Cabinteely had a fantastic victory on Friday night last but the Town had an equally impressive win over  Drogheda United at the City Calling Stadium on Saturday night.

This was a very workmanlike performance from the Town and good preparation for the visit to Stradbrook.

This season Neale Fenn has assembled a very strong panel as he had Mick McDonnell, Adam Evans and Sean Brennan on the bench. Add in to that Tristan Noack Hofmann, Jamie Hollywood, Carlton Ubaezuonu, Kevin Knight and Karl Fitzsimons and the younger lads Paddy O'Sullivan, Uli Keller and Eoin O'Neill.

Friday's game against Cabinteely will be a difficult task but one expects this new look Town team to come away with a good result.