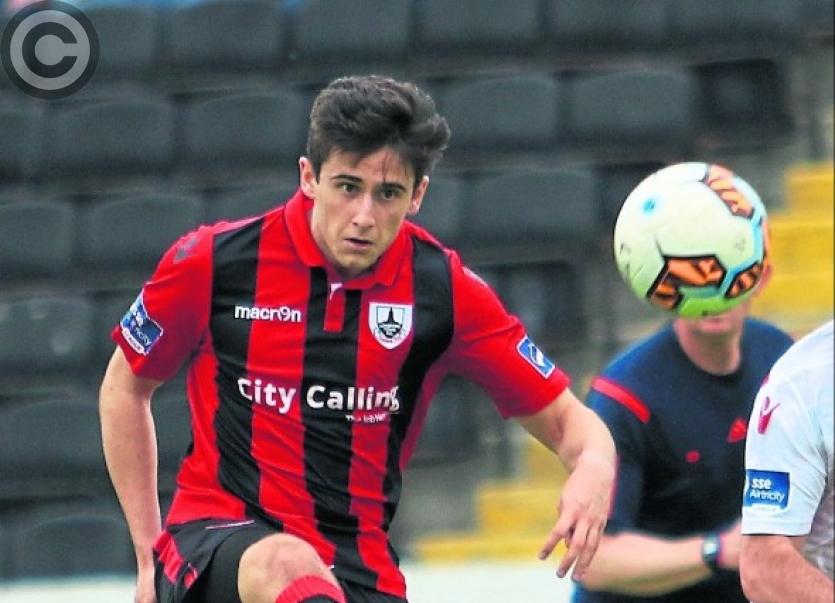 The versatile Sam Verdon who is back with Longford Town after leaving Finn Harps. Photo: Syl Healy

After a short stint with Finn Harps that saw him start in the opening Premier Division fixture of the season against Bohemians at Dalymount Park, Sam Verdon is back with Longford Town after departing the Donegal club for some personal issues.

The versatile Verdon was the second leading goalscorer for Longford last season and his return to the Town is a major boost in the battle for promotion in the First Division.

It may be only the second week of the season but next Saturday night's game against Drogheda United at City Calling Stadium is shaping up to be a real cracker, kick-off 7.30pm.

Drogheda are under the managerial skills of Tim Clancy who is assisted by former Longford Town player Kevin Doherty who has moved from Shelbourne to join up with Tim.

On Friday last Drogheda made a great start with a very impressive 4-0 victory over Stephen Henderson’s Cobh Ramblers at United Park.

Before the big kick-off last weekend the betting on this year's First Division was pointing towards Tolka Park where rookie manager Ian Morris is expected to bring Shelbourne back to the promised land after the club have signed some very experienced players who have all played in the Premier Division.

Last season Morris was playing for Bohemians in the Premier Division but he also managed some of their underage teams. The main reason for their favourites tag is the signing of striker Ciaran Kilduff who previously played for Dundalk where he won three league titles and they also signed Conan Byrne from St Patrick's Athletic and Oscar Brennan from Bohemians. Shelbourne are everyone's favourites for promotion but Drogheda will be hoping to be in the shake up at the end of September just like last season.

Drogheda got to the play-offs and beat Shelbourne before losing to Ollie Horgan's Finn Harps. Manager Clancy has retained most of last season's squad which is a great start for him as continuity is a big plus when you are chasing honours.

Clancy played the game at the highest level having started with Millwall before heading to Scotland where he played with Kilmarnock, Motherwell, Hibernian and St Johnstone.

When he returned home he played with Shamrock Rovers and Sligo Rovers and Bray Wanderers. Tim was a more than useful player and he has lots of experience to pass on to his team as they try to go one better than last season.

Last Friday night at home a very experienced team that included most of last season's starting eleven with the exception of  Jake Hyland who is out with a long term injury and the very impressive Ciaran Kelly who joined his old club St Patrick's Athletic pre-season.

Drogheda took an early lead against Cobh when young striker Mark Doyle scored his first goal in the 8th minute when he was set up by former St Pat’s man Thomas Byrne.

Former Shamrock Rovers player Chris Lyons got goal number 2 when former Town keeper Paul Hunt fumbled a shot from Sean Brennan and Lyons reacted quickly to put the ball in the net just before the half hour mark. Worse was to follow for Cobh when they were reduced to 10 men when Cian Leonard was red carded after two very silly yellow cards.

Three minutes into the second half Drogheda increased their lead when the much travelled Adam Wixted was set up by Conor Kane for a fine individual goal that gave Paul Hunt no chance.

Drogheda were in full control and it was no surprise when they added goal number four and that came from the in form Mark Doyle.

Drogheda are sitting on top of the table on  goal difference and it will take a big performance from the new look Town team to break down their solid defence. Former Town keeper Paul Skinner is Drogheda's no 1 and no doubt he will get a great reception from the Town faithful.

The Drogheda defence is that which played a big part in their chase for a play-off spot last season with the exception of Ciaran Kelly who has left the club.

The very experienced  local lad Sean Brennan is their key player  in midfield. Sean is from Drogheda and he has three other brothers Ryan, Gavin and Killian playing in the Airtricity League.

Former Town player Mark Hughes is a valuable member of their midfield as is Adam Wixted who scored against Cobh. Doyle is a very good striker who is capable of scoring against any opposition and he is ably assisted by Chris Lyons.

This Drogheda squad has quite a few experienced players but they also have some fantastic young players who came through from under age teams at the club and also other clubs from Dublin.

The Town's new look team travelled to the Markets Field on Friday last and came away with a creditable 0-0 draw against the recently relegated Limerick team. Limerick are having their problems but they are trying to get new investors in the club going forward.

The Town team that started had six players making their league debuts for the club and they are slowly getting to blend in with their new team  mates.

The game ended scoreless but the game wasn't boring as both keepers and defences did very well on the night. Former Town player Jack Brady was in goal for the home team and he made a few excellent saves during the game.

The Town were missing Carlton Ubaezuonu, Kevin Knight and Jamie Hollywood through injury but still had a strong squad to pick from and that hopefully will push us to the pinnacle of the First Division in the coming weeks. Both sets of forwards had their chances but neither could beat the respective keepers.

New striker Aaron Dobbs should have opened his league account on a few occasions and hopefully that will change in the coming weeks when all the panel get used to each other.

There is no doubt that the addition of Conor Kenna to the defence has tightened the team up at the back and to start with a clean sheet will be a big plus for manager Neale Fenn.

Last season the clubs met on three occasions in the league and it was honours even as both won one match and the third game was drawn.

The opening game between the clubs was played in mid April and that ended in a one all draw. Dean Byrne opened the scoring for the Town in the 57th minute with a stunning goal from 25 yards. That goal was noted goal of the season at the club’s end of season dinner dance in the Longford Arms Hotel.

It looked as if the Town were going to come away from Drogheda with three valuable points as the game went into injury time. Five minutes into injury time defender Ciaran Kelly scored a late, late equaliser.

The next game was played at  City Calling stadium in mid June and the Town came out on top in that game with the only goal coming from the head of Sam Verdon. The Town held out well and deserved the three points.

The final meeting between the clubs took place at  United Park in mid September and the home side won by the odd goal in three.

The Town took the lead in the 14th minute when Dean Dillon blasted the ball past Paul Skinner. The home side equalised in the 36th minute and it was a very good goal. scored by Gareth McCaffrey who curled a free-kick past Kelly in the Town goal.

The winning goal came in the 68th minute and it was a very controversial one. Chris Lyons played the ball through to McCaffrey who appeared to be well offside and the striker lifted the ball over the advancing Mick Kelly in the Town goal.

Longford almost scored an equaliser eight minutes into injury time when they were awarded a corner and Mick Kelly headed the ball past the post with Skinner well beaten.

That loss put the Town out of contention for a play-off place and hopefully we can get revenge on Saturday next with a victory.

Drogheda manager Clancy has the team playing well and no doubt they will be  buzzing for the visit to City Calling Stadium.