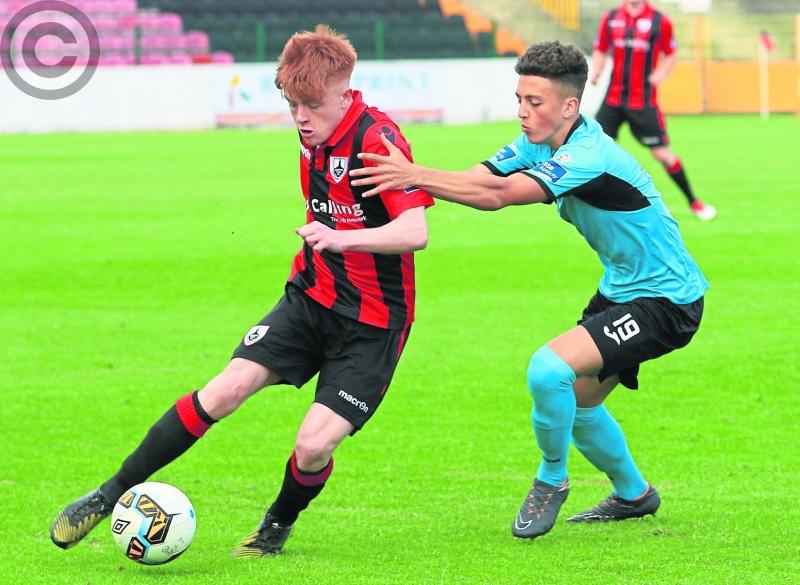 Longford Town midfielder Aodh Dervin is a perfect example of how hard work can pay off. The local lad had been involved with the Town first team since 2017 and last season he cemented his place in the starting line-up by putting in a number of dazzling displays.

Dervin is someone young Longford Town supporters can aspire to. He said: “It’s madness. I feel like I have to pinch myself sometimes. It shows that you don’t have to leave Longford.

“You have to work hard for it and put the graft in. Tristan (Noack Hofmann) does that as well. Even though we are not full-time I treat it as full-time.”

Introduced as a substitute against Galway United in a 0-0 draw last March the youngster never realised how his season was going to change; for the better.

“I was not expecting it, to be honest. I broke in near the start against Galway and then had a good run of games. I even kept my spot when I did my Leaving Cert so I have to thank the gaffer for that. He trusted me and that gave me confidence”

Neale Fenn’s trust in Dervin was due to impressive displays but the modest young man shrugs the praise. Aodh said that the break from football due to his Leaving Cert was a testing time and he was eager to get back playing.

“I always wanted to get back into action but the one thing I was worried about was coming back after my Leaving Cert exams.

“I was going to bring my boots up to the Cabinteely game and see if I could play. I wasn’t even allowed train. I was happy to get back playing football.”

Dervin’s favourite player is former Manchester United midfielder Paul Scholes. With his own performances and that red head, Longford Town have their own version of Scholes.

“I have a long way to go before I am as good as him. I try to base my game around him by watching youtube videos. I want to be like him; to be the best I can,” said Aodh.

Shelbourne and Bray Wanderers are the two sides tipped to battle it out for the First Division title but Dervin believes Longford Town will not be too far off the top and hopefully starting with a positive result away to Limerick this Friday night.

“Shels are the favourites on paper and Bray as well. I think we will be up there. I feel the football that we play when we get going is effective and the other teams will find it hard to match us if we produce our true potential.”

Dervin is delighted with the signings Neale Fenn made in the off season. Paul O’Conor and Conor Kenna have been very good to the Longford youngster as well as captain Dean Zambra. The three bring a wealth of experience to the squad:

“Paul and Conor are very good. They have been around the league a long time. It’s great to have that. If I need to talk to someone the three experienced players (Dean Zambra included) are there to help me out,” stated the rising young soccer star.