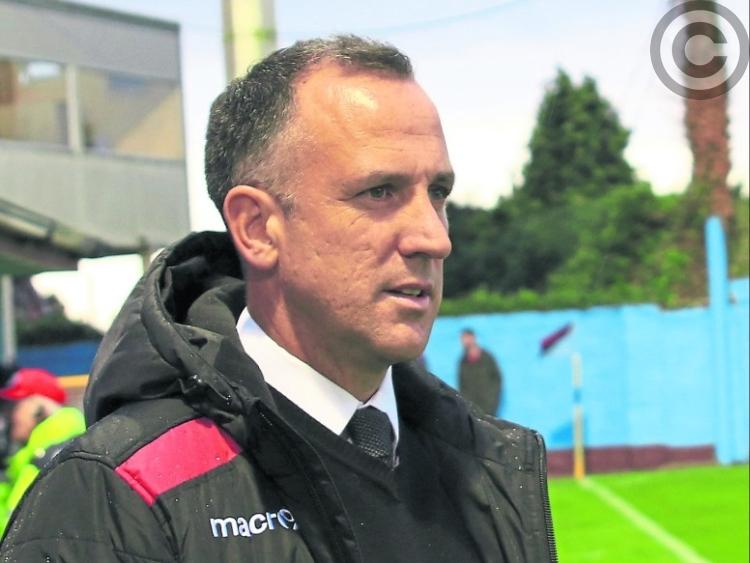 Longford Town manager Neale Fenn with the target of at least a place in the promotion play-offs this season. Photo: Syl Healy

Pre-season has gone well for Longford Town and manager Neale Fenn is hoping this augurs well for his side as they look ahead to their opening league game away to Limerick at the Markets Field this Friday night.

“It is very difficult to judge from pre-season. We have created chances and scored goals and that’s pleasing for us. The goals were spread around a little bit which is brilliant. It can only bring confidence for the season,” stated Fenn.

Getting goals was a problem for Longford Town last year as they failed to put away the chances they created in games and as a consequence dropped valuable points.

Fenn said: “There were games where we dominated and could not finish it off. Hopefully that will change this season.

“We can go back on last season and look at injuries and some referee decisions as well but we won’t harp on those in looking forward to this season.”

Shelbourne are the favourites to win the First Division title but Fenn said it is hard to make a prediction on how the season will go.

“It’s hard to call. Shels invested quite heavily in their squad, Bray also. We have got a lot of new signings, Drogheda have strengthened as well and Athlone, Wexford, Cabinteely and Cobh too.”

Promotion is the aim for the Londoner. Longford Town narrowly missed out on a play-off spot last season and he is hoping they can go one better this year.

“Last year we were unlucky to miss out on the promotion play-offs. Certainly this year we will be going to at least gain a place in the play-offs. We are going to do it ‘our way’ trying to win matches. We want exciting football and to attack teams, that’s the way we are set up.”

Fenn can look back on the 2018 campaign and is hopeful Longford can right the wrongs this year. He knows how important it is to pick up as many points as possible and to avoid slip-ups.

“If you have a slip up it can hit you hard. If you don’t take maximum points out of games it can really harm you.

“Look at last year away to Drogheda where they scored the equaliser in the 94th minute and the Finn Harps game at home where we dominated and lost.

“Hopefully we have a little bit of luck this season, like we didn’t get one penalty in the league last year.”

With his squad now finalised and a good pre-season behind them the Town manager is looking forward to the 2019 campaign, starting against Limerick on Friday night.

“We are looking forward to this season; new players, new squad. We are really focused on doing the job.

“We have added a few experienced men this year that will hopefully see us through the games that we are leading or when we need to sit on a result.

“Last year we maybe were a bit too adventurous but It’s exciting. We don’t want people to come to City Calling Stadium and be bored,” commented the confident Fenn.