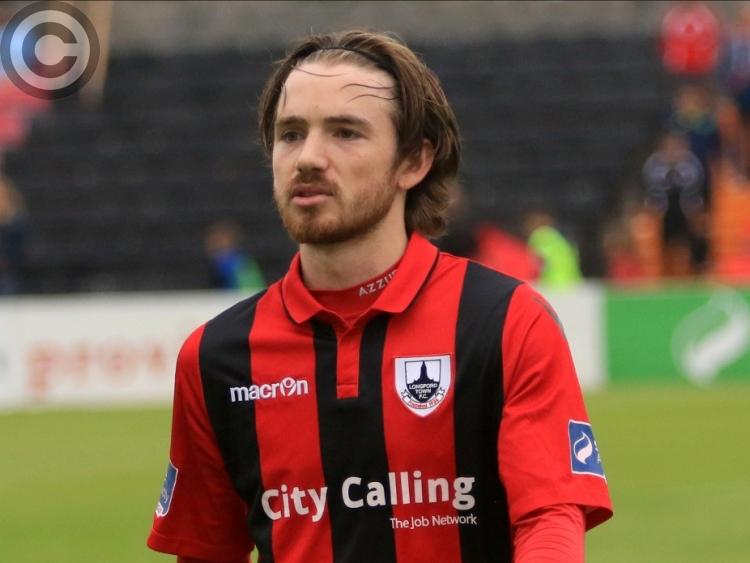 Longford Town winger Dylan McGlade, who broke the deadlock against Shelbourne when he converted a penalty on the stroke of half-time in the FAI Cup clash at City Calling Stadium. Pic: Syl Healy

Longford Town are through to the last eight of the FAI Cup for the second season in succession after scoring a convincing win over fellow First Division rivals Shelbourne at City Calling Stadium on Saturday night.

Watched by the official attendance of 614, the Town enjoyed the better of the exchanges in the first half and eventually broke the deadlock on the stroke of half-time when wing wizard Dylan McGlade made no mistake from a penalty after he was brought down in the box by Shels defender Reece McEnteer.

While it was no more than Longford deserved it might have been a different story but for a brilliant save from Town keeper Michael Kelly who kept out a close range shot from Lorcan Fitzgerald in the 31st minute.

The Town created a few scoring chances in the first half but none were converted and Kelly came to the rescue again with five minutes gone on the changeover when he produced a fine point-blank stop to prevent Adam Evans scoring the equaliser for the visitors.

Shels had a very lucky escape when the post denied Darren Meenan a second goal for Longford in the 65th minute, after receiving the perfect pass from the excellent McGlade, but Neale Fenn’s adventurous side put the issue beyond all doubt when they scored a second goal in the 72nd minute.

Defender Daniel O’Reilly blasted the ball to the back of the net with a well struck shot from the edge of the box after connecting with a corner from McGlade to clinch a well deserved victory, much to the delight of the home supporters.

The draw for the FAI Cup quarter-finals will be made on RTE’s Soccer Republic programme on Monday evening.