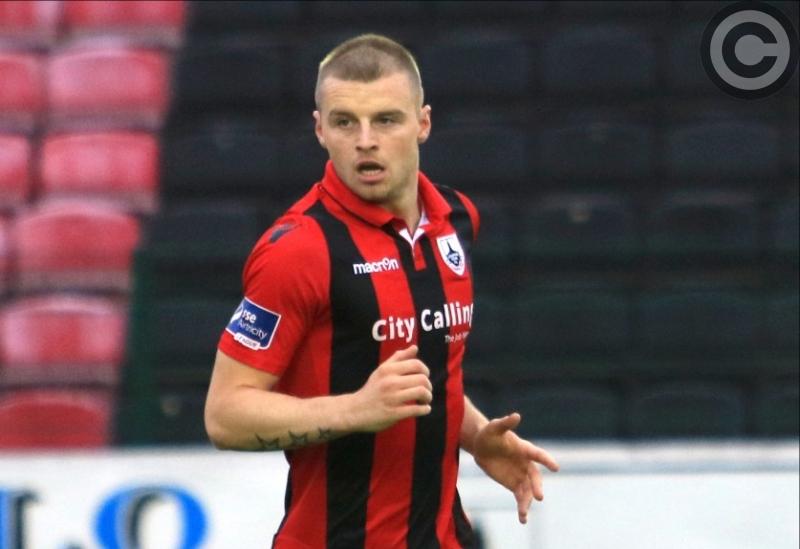 Jamie Doyle, who scored twice for Longford Town in the excellent away win over Galway United. Photo: Syl Healy

Longford Town kept their hopes of a place in the promotion play-offs very much alive when they produced a brilliant performance to crush Galway United in the crucial First Division clash at Eamon Deacy Park on Friday night.

Two goals apiece from Jamie Doyle and Dylan McGlade leaves Longford just two points behind Drogheda, who currently occupy fourth position in the table and the remaining play-off spot, and the sides will meet in a massive match at United Park on Friday 14 September.

The Town are at home to Cabinteely (Saturday 1 September) and UCD (Saturday 22 September) in their other two fixtures left to be played in the league and the opportunity of achieving Premier Division status next season is in their own hands.

If Neale Fenn’s side win their remaining three games in the First Division then a promotion play-off place will be guaranteed in what is developing into a dramatic finish to the league campaign.

Jamie Doyle opened the scoring against Galway in the 15th minute and doubled Longford’s advantage in the 49th minute. Dylan McGlade got his goals in the 54th and 78th minutes with Galway substitute Carlton Ubaezuonu scoring a consolation goal deep into stoppage time.

The Town finished the game with 10 men when the injured Jamie Hollywood had to be stretchered off in the 86th minute after the three substitutes were already introduced.