Longford Town need a win away to Galway United 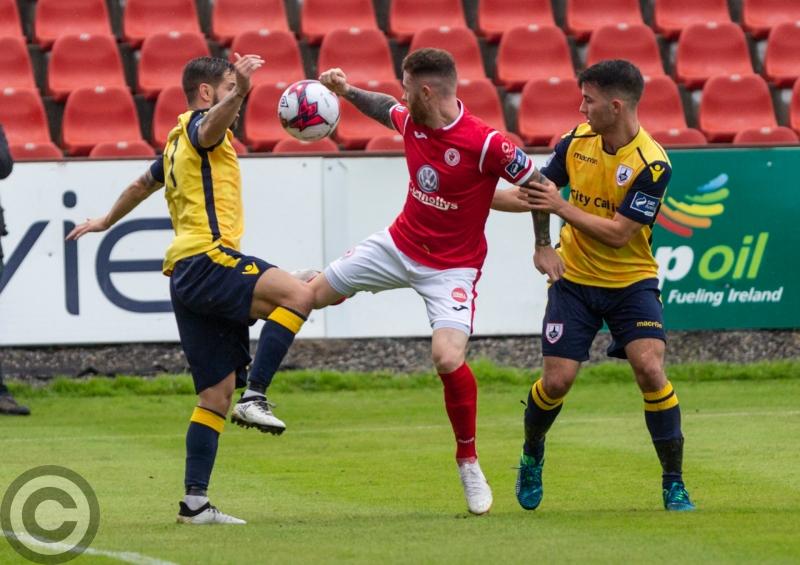 Darren Meenan and Karl Chambers pictured in action for Longford Town against Sligo Rovers in the FAI Cup first round game at the Showgrounds on Saturday night last.

With four games remaining in this year's First Division the Town travel to Eamon Deacy Park this Friday to play Galway United in a must win match, kick-off 7.45pm.

It's imperative that the Town take full points from all four fixtures and even that might not be enough to finish in the top four.

Galway actually are worse off than the Town as they are currently in sixth place, two points behind Longford and six behind Shelbourne and Drogheda United who are third and fourth.

Finn Harps are two points ahead of both Shels and Drogheda while table toppers UCD are now seven ahead of Harps and will almost certainly be promoted to Premier Division for the 2019 season. There hasn't been a lot between the clubs this season but in fairness the Town have just about shaded the results against Galway.

The first meeting between the clubs at Eamon Deacy Park at the end of March ended scoreless. In fairness this game should have produced some goals but good defending and some very poor finishing meant that the crowd of over a thousand fans had to go home without witnessing a goal. The second meeting between the clubs was played on the first day of June and that game was a real end to end contest with the Town coming out on top in a five goal thriller, 3-2.

The Town opened the scoring in the seventh minute and it was a real beautiful goal. Aodh Dervin, who has a knack of scoring great goals, beat the Galway keeper Gleeson after latching on to a pass from Dean Byrne outside the box.

A few minutes before half time Sam Verdon capitalised on slack marking in the Galway defence to extend the Town’s lead. The Town were well on top  but disaster struck when Darren Meehan saw red for a poor tackle on Mark Ludden in the 44th minute.

Despite being down a man the Town should have got goal no 3 in the 52nd minute when Dean Byrne shot over when put through. A few minutes later the visitors got back in the game when Conor Barry scored a very good goal.

Worse was to come for the Town in the 67th minute when Galway were awarded a dubious penalty, the referee somehow decided that Mick McDonnell fouled former Town player Connolly but justice was served when Alan Murphy blasted the spot kick over the bar. Midfielder Murphy is now the Galway player/manager. Kelly came to the Town's rescue some time later when he made an outstanding save from a close range shot from Mark Ludden.

A bad defensive mistake gifted the Town goal no 3 in the 79th minute. Sub Karl Chambers who had replaced Dylan McGlade shot for goal but defender Robbie Williams  deflected the ball past Gleeson to give the Town a two goal cushion with around ten minutes.

Galway got a lifeline in the 87th minute when former Town player Stephen Walsh scored. The final minutes were tense to say the least but the Town did enough to get the three vital points.

Last weekend the teams had a break from League games as the first round of the FAI Cup took place. Galway travelled to Ferrycarrig Park (Wexford) to play North End United who won the FAI Junior Cup and came away with a very creditable 4-0 victory.  Star of the game for Galway was Eoin McCormack who helped himself to a first half hat-trick.

The Town travelled to the Showgrounds in Sligo on Saturday night last hoping to cause another Cup upset against the five time FAI Cup winners on their home patch. Sligo would have bad memories from their trip to  City Calling Stadium last season and they would be hoping that lightning would not strike twice against Longford.

When you look at the Sligo squad you can see it is full of experience but this didn't worry this young Town squad. This Sligo team played Derry City in the league recently and won 2-1 but they lost 1-0 to Derry since that in the semi-final of the EA Sports Cup.

At the Showgrounds both teams had their chances but they may have been shaded by the home side but the Town keeper Mick Kelly was in top form and he denied the Premier Division side on quite a few occasions during the game.

The all important goal came in the 65th minute and this was down to some sterling work by Dylan McGlade who beat a few defenders before crossing from the end line and Jamie Hollywood made no mistake with an excellent strike that flew past Sligo keeper Mitchell Beeney.

It was backs against the wall for this young Town team after that but they grounded out another excellent result against Sligo.

There were many heroes on Saturday last but keeper Mick Kelly deserves a special mention for some of his excellent saves.

But the big game for the club takes place this Friday night against Galway and three points would be great to keep Longford Town  in contention for a top 4 finish.