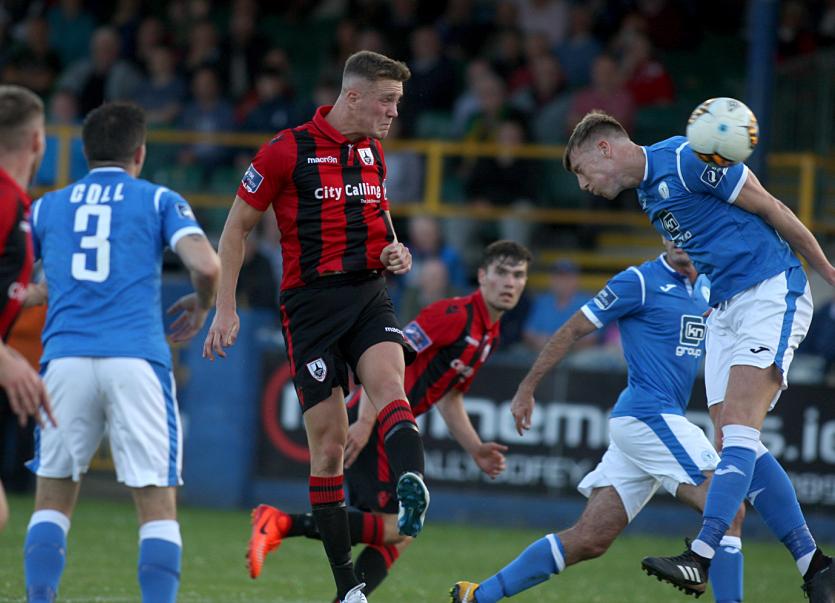 With seven games remaining in this year's First Division, the Town face seven Cup finals if they are to get a place in the promotion play-off after two disastrous results in the last couple of weeks and are now facing a must win game against Wexford at City Calling Stadium on Saturday, kick-off 7.30pm.

At the end of the second phase of games the Town played league leaders UCD at the Belfield Bowl and came home with a resounding 5-1 victory and everything looked great going into the final round of games.

Like earlier in the season the Town decided to collapse after such a great victory and lost to Cobh Ramblers at home on a 2-1 scoreline.

Worse was to come on Friday night last when they travelled to Finn Park where they won 4-2 recently and on this occasion rolled over and were hammered 3-0 by a Harps team who have now moved into joint second place and they are believing that they can get the all important top spot and automatic promotion.

There can be lots of excuses and bad misses but performances like the last two aren't acceptable and something has to be done about it.

Admittedly Sam Verdon was out through suspension and new signing Jamie Doyle was also missing but this was a game that the club should have at least got a point from as Harps picked up six points from their latest two games.

Neale Fenn has been active in the transfer market during the July window bringing in Dean Dillon from Shamrock Rovers, Jamie Doyle from Shelbourne, Warren Mitchell from the U-19s and more recently, former player Craig Walsh from Bray Wanderers.

Both Dillon and Walsh started in Finn Park for the suspended Sam Verdon and Jamie Hollywood, who must rate himself to be so unlucky for being the fall guy for the Cobh defeat.

The game in Ballybofey was a comedy of errors plus many bad misses from the Town. If you don't put the ball in the net, you are going to be in trouble and that's the way it worked out.

Three goals conceded and we had our chances but in fairness some of our defending was shambolic.

There is no doubt that at this stage if we continue to play like we did in the last few games we will fall lower in the table.

A couple of weeks ago we were talking of challenging for the title but after the results last weekend we have dropped to sixth place on goal difference behind Galway United.

On Saturday next we have a visit from, at the moment, managerless Wexford. The fact that manager Damien Locke has left the club will not help the run in to the end of the season for them, even though Shane Keegan is being mentioned as returning to the club.

Last weekend Wexford played at home to leaders UCD and lost 3-0.  Losing a manager can work two ways and at this stage it will take a big effort to get this Wexford team to the highs of previous years.

The teams met twice this season and the Town have won both games. The first meeting was in early March and on that occasion the new look Town team won 3-0.

Chris Mulhall was the scorer in chief with two goals while the other goal came from Dylan McGlade who is enjoying a fine scoring run this season.

The second game was away in Ferrycarrig Park and the Town won 2-0 with goals coming from Jamie Hollywood and Chris Mulhall.

The fact that the Town have yet to concede a goal against Wexford should be pleasing to the manager and no doubt he will be hoping to continue that record on Saturday night.

Last Tuesday night week the Town played Oxford United in a pre season friendly and a very youthful Town side lost 5-1 to the English side.

Only Darren Meenan, Chris Mulhall, Dean Dillon and Jamie Doyle of the first team played while the rest of the squad were made up of under 19s and under 17s.

Dean Dillon, on loan from Shamrock Rovers, scored his first goal for the club. This was a worthwhile exercise and it gave the up and coming lads a chance to play against strong opposition.

There are still quite a few players missing from the squad and  Neale Fenn will be hoping for the injuries situation to improve with the pressure on for a place in the promotion play-offs.