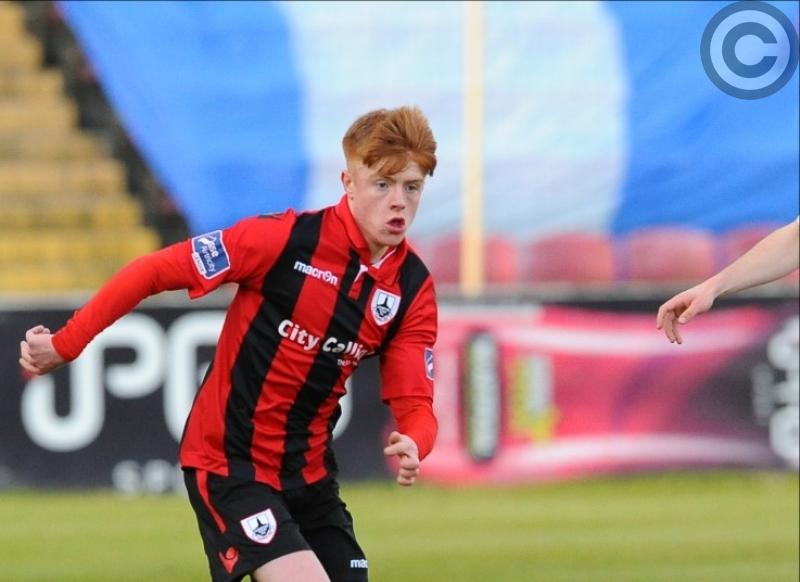 Aodh Dervin, who scored a cracking goal for Longford Town in the early stages of the league game against Galway United.

Despite having to play the entire second half with ten men after Darren Meenan was sent-off just before the break, Longford Town got the better of Galway United in the crucial First Division league clash at City Calling Stadium on Friday night to boost their promotion play-off hopes.

The Town produced their best performance of the season to dominate the first half, creating a few chances and the highlight was a cracking goal from 18-year-old local lad Aodh Dervin with a classy finish from just outside the  box in the 7th minute.

And they looked in complete control when Sam Verdon capitalised on poor Galway defending to direct the ball into the corner of the net in the 43rd minute.

But not for the first time this season Longford pressed the self destruct button when Meenan received a straight red card for a tackle on Galway opponent Marc Ludden and it developed into a very tough battle on the changeover.

Having to deal with the numerical disadvantage and the pressure it brought on, the Town wasted a glorious opportunity of scoring a third goal in the 52nd minute when Dean Byrne shot over the bar from close range following another Galway mistake.

The Town were then punished for a blunder when Dylan McGlade gave the ball away as Conor Barry broke clean through to score a well struck goal for the visitors in the 55th minute and it should have been all square when a penalty was conceded by the home side in the 67th minute.

In what appeared to be a very harsh decision, referee Tom Dempsey decided that Town defender Mick McDonnell fouled Ryan Connolly in the box but the vastly experienced Alan Murphy blasted the spot kick over the bar - much to the sheer delight of the Town supporters.

Longford keeper Kelly then came to the rescue when he produced a fine point-blank save to keep out a shot from Marc Ludden and the Town got a vital break in the 79th minute when another Galway mistake gifted a killer third goal for Neale Fenn’s side.

Substitute Karl Chambers found the net in the 79th minute but Galway were not done for yet and were given a glimmer of hope when Stephen Walsh scored their second goal in the 87th minute.

The closing stages of the game was very tense and Galway almost snatched a dramatic last gasp equaliser in the fourth minute of stoppage time when Eoin McCormack shot over the bar.